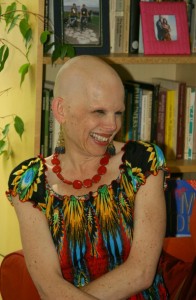 Not long ago I went to a London exhibition about identity and it was a mind-boggling cross-science mix. I was especially interested in the twin studies and the nature/nurture question. How alike are twins who aren’t raised together? Is blood really thicker than water – or thinner?

In my new YA novel published by Candy Jar, Fizzy and Kim aren’t twins but by the end that’s how they feel. The starting point of this story was a news item I saw a few years ago about a mistake in a Russian hospital, and that’s why I’ve dedicated the book to those real-life girls who have bonded through the melodrama. My characters are fictional of course, and the idea was to create two girls whose lives have been completely different up to the point when the truth is uncovered – and whose personalities and attitudes are very different too. Yet their growing bond has to hold the narrative together in the midst of a series of emotional earthquakes!

The mistake that causes the problem is rare, but my story isn’t really about that plot-sparking premise. It’s about identity. My friend who is an identical twin has a take on that. So does a friend who’s a Jewish Catholic married to an atheist. Ditto anyone mixed-race, anybody who moves to another country, is adopted or fostered or just feels out of place at home. So do people who are judged by their appearance, which others use to define them. As a woman with alopecia I understand that.

I’ve been the girl with uncool frizzy hair and the woman faking it with a convincing glamorous wig. Now I’m boldly bald – but how much have those externally different identities determined and modified my inner or core self?

Kim and Fizzy are fifteen so they’re changing physically and emotionally but also close to being officially grown-up. In the midst of upheaval and conflict they try to find themselves. It’s what we all have to do, sooner or later. So I see this as a book for everyone, teens up. YA fiction has been dominated recently by dark fantasy and THINNER THAN WATER is about blood too! But for my heroines the truth is far scarier and more shocking than vampires. As a reader I love big, emotional novels that feel utterly real, with characters I get to know inside out. This is an inside-out novel and I hope readers will love Kim and Fizzy as much as I do – and, like me, feel they know them better than their mothers do, or could!