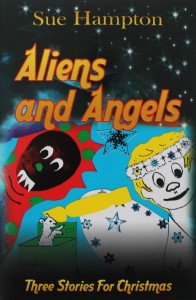 ALIENS ANGELS was published last winter but I hope that my trio of Christmas stories will be enjoyed again each December: a new feature in the special ritual of a family Christmas. As I get older my own childhood Christmases seem like something out of a movie, the kind where the women have carved hair and wear heels and gloves indoors, and the men live in suits and smoke between dances.

Not that anything like this happened at my house. We were a jim-jams or cardigans family. But as I rerun it, minus all today’s technological gadgetry, it looks so long ago and faraway. Even though I live it again, as if the child in me never changed.

4:45 I wake and hiss along the landing to make sure my brother isn’t sleeping. We feel our stockings in the dark as if we don’t know exactly what’s in them.

5:32 Singing Away In A Manger as sweetly as we can, we pad downstairs and hover at the doorway of the big bedroom, to be told, “Happy Christmas!”. And to come back at six.

5:51 Christmas begins in Mum and Dad’s bed, with matching stockings unpacked to reveal a satsuma, chocolate money in a net bag, a pencil and a larky sharpener. Maybe a Pez dispenser, tricksy pen or Knitting Nancy. My parents know better than to include bows, ribbons or decorated hair slides because I hate my wild hair as much as my turned-up nose.

6:30 Dad’s hand becomes an eagle claw that has to be escaped if we’re ever to make it out of ‘the big bed’ for breakfast. Cue laughter, breathlessness and squealing. It’s one of the many reasons he’s my hero.

6:48 We’re allowed one present to open before breakfast – the biggest, of course. There’s no pretence about Father Christmas; he’s just a fairy-tale figure like Rupert Bear. My brother chooses a train set or Meccano – something in bits. Mine is a doll – but not Tiny Tears, because water comes out of her somewhere else and that’s rude.

6:55 Breakfast is cereal by candlelight. The living room is trailed with paper chains in oddly pastel shades. Over the fireplace is the tiny, creamy nativity scene to rearrange, more fun than Sindy’s cupboard ‘house’ because the baby that slots into the manger is the size of a duffel-coat toggle, Mary looks so kind and the donkey always tries to get close enough to nibble the straw.

7:00 We open our other presents, which include a board game to play, a Blue Peter annual and hardback stories to read, an Airfix kit to make (Henry V111 for me, a ship or plane for Dave) and a box of sugared jelly fruits for when Mum suggests we’ve had enough chocolate. And all the while we listen to carols on the radio or record player and Dad keeps the fire stoked and blazing.

12:00 We walk to my Nana and Pop’s house in crunchy, pristine snow (all right, that was just once) so the party can begin.
And like the film stars’ hair and manners, it’s all – unbelievably – perfect.

One thought on “The Spirit Of Christmas Past”