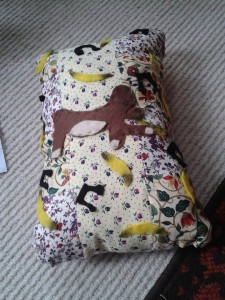 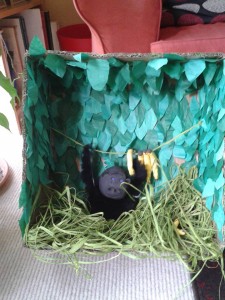 When GORILLA DREAMS was published I invited children in fourteen local schools to use their imaginations and ask themselves what gorillas might dream of doing or being. They could show me in an artwork, poem, story or dance – and they did! Illustrator Mary Casserley and I were amazed by their creativity and commitment. Some clearly spent hours creating their entries – patiently and skilfully – and the delight shone through. I wonder what adults would find to say if you asked them what gorillas might dream about.

In the kids’ entries we had a gorilla making music in the forest by playing the banana (on a cushion stitched with felt), another inadvertently clearing the ski slopes with an exhilarating jump down a snowy mountain, and a forest king with a crown of bananas… This rich variety of ideas and presentations made for a joyous celebration at the Prize Giving at Berkhamsted Library.

I like to give children freedom to express their own individuality. As a teacher I hated the kind of display where all the work is the same. Too many rules and narrow objectives can be stifling. Imagination is, after all, an energy and a liberation, and the curriculum should be giving it free range, not constricting it. My mum told me a story she’d found in a book about a teacher who divided children into various groups of fish, then called, “Guppy!” or “Salmon!” so they could run into the right corner. Feeling a tug at his sleeve he looked down to find a small girl asking, “Where do the mermaids go?” Like all good teachers, he had to think – not just fast but imaginatively. What would your answer be? 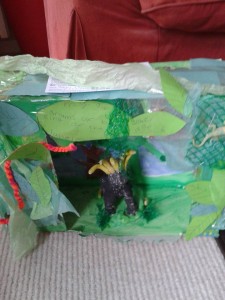 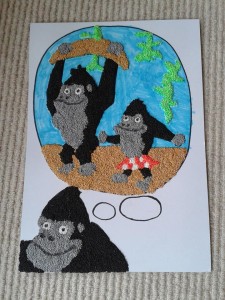 I write about the mermaids: the kids with their own individual way of looking at the world, the misfits, the free-thinkers, exceptional and bravely unorthodox. I’m not a big fan of conforming, because I think imagination helps us to rise above the expected, the predictable and the routine. We’ll need imagination to create a better future for these kids, in a safer, saner world. So when Nicky Morgan says Humanities won’t earn students a job, I wonder whether she’s ever considered the origins of that word. Because what makes us human, as opposed to clones in a workforce, is the creative imagination underpinning the subjects she disregards. It’s the same creative imagination that understands gorilla dreaming – and as the kids’ faces show us, it ROCKS.