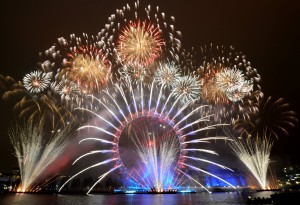 My mother-in-law remembers first footing at New Year in the north-east – by a dark-haired man with coal. Very bizarre! New Year’s Day only became a public holiday in the UK in 1974 but more than that, New Year’s Eve was a low-key affair except for those living close enough to Scotland to catch the spirit of Hogmanay. Now it’s globally competitive, and another reason to spend and consume. But it’s as positive or negative as the individual chooses to make it, with or without the fireworks.

Personally, for health reasons, I’m glad to see the back of 2014 and would like to think that my ‘quality of life’ will improve in 2015. More importantly and less selfishly, I’d celebrate from my heart and soul if I believed that this coming year would mean a better quality of life for the have-nots of our society, whether they’re the families forced to use food banks, the unemployed, homeless, addicted or depressed, or anyone else marginalised by prejudice, benefit cuts and reductions in the kinds of services that were their lifeline. I’d like to think the elections to come will prove that the callous “Me, me!” have-it-all bigots are in fact outnumbered by those of us who want a peaceful revolution, a more equal and compassionate UK that celebrates diversity and our shared responsibility – for each other, and the world we share on earth.

Voting Green is about that hunger for change from the inside out. It all hangs together. Unless we care with respect for those who are different from us, stop looking to war for solutions and pretending the arms trade is simple economics rather than mass murder, there’s not much point in protecting the biodiversity of the planet or trying to save gorillas and tigers. And unless we put an end to ecocide – the criminal destruction of the natural habitat on which all living things depend – there’s not much point in trying to reduce social inequality because climate chaos will threaten us all before too long.

I’m heartened by the under-30s who have no time for bigotry or isolationist nationalism. There’s a Green surge and this year will see it gather an unstoppable momentum. We have the technology and understanding necessary to create a sustainable future and it’s up to each of us to make it happen. That’s why I wrote THE DREAMER, FLASHBACK AND PURPLE and CRAZY DAISE. They’re my contribution. They’re the least and the best I can do.