From Strictly to Middlemarch – in a few smooth moves? 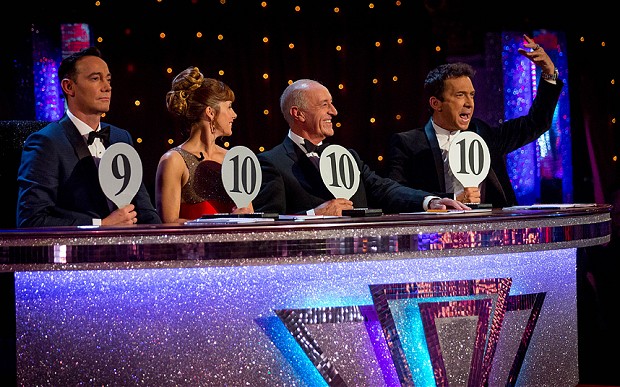 Strictly puzzles my mother. Or rather, it’s my love for it that she can’t explain, because I was raised with Quakerish values incompatible with strutting one’s stuff in sequins. The implication is that as a serious Green who rejects competitive materialism I shouldn’t be indulging in anything so frivolous or excessive. Well, yes. But it’s fun. And there’s much in this show that’s positive in a cruel world. What do I enjoy most? Well, firstly the dancing. My husband Leslie Tate and I used to be regulars at Sadler’s Wells until we became too creaky for late nights in London, so we’ve seen some great and varied shows, some of them wildly original but all of them using highly-trained performers demonstrating skill and artistry. The Strictly professionals are fine dancers too, and in order to win votes they’re obliged to deliver new moves like Gleb’s for Unchained Melody and stylistic fusions like Kevin’s hip-hop Samba. But it’s the group dances at the start of the results show, and the duets that rescue lame pop performances, that Leslie and I look forward to most. Whether the genre is Busby Berkeley with synchronised swimming or a narrative of modern love stories, the professionals don’t disappoint. And as a bonus, they become characters in a kind of engaging drama.

There’s something very warm about Strictly. Every year the contestants talk about the family they become, the encouragement they give each other and the close friendships that can develop between teacher and pupil. And yes, I know dance can lead to dangerous intimacy between those not free to Tango, but as a romantic I do enjoy it when I believe someone may be falling in love with his or her partner (I won’t say who in this series, but I will say that I’ve been proved right in the past). Even Craig’s apparently mean criticism of the weak celebrities’ performances, such as calling the valiantly committed Jeremy Vine ‘a stork struck by lightning’, is only a kind of panto, with judge and contestant getting on famously backstage and in the bar. It’s a far cry from X-Factor’s demolition of the wannabe Whitney or Adele who is told she can’t sing or is too ugly to be allowed to do so. Contestants like our Jeremy simply jump at the challenge of learning something new and the chance to be a part of a bright, exciting experience. And like teachers ourselves we celebrate their progress, which in some cases amounts to transformation.

It’s not deep and some celebs struggle – understandably, on live TV – to find new insights or fresh vocabulary to explain their feelings about the dance-off or the difficulties of the jive. Clichés abound. But in this household we find Claudia at her craziest, ad-libbing best funnier than most stand-ups, and the show generates memorable moments not unlike the Blue Peter elephant – usually involving Bruno. The question here is how, you may ask, I intend to link the BBC’s flagship light entertainment show to writing….

With typically imaginative ingenuity, Leslie used to incorporate the Strictly judges into his talks on what makes a great novel, because they look for different things: Bruno for passion, Craig for daring originality and Len for technique that’s faithful to tradition. Now we have Darcey, who values what she represents – grace and poise. Leslie’s proposition was that the greatest novels, like the best choreography and performance, incorporate all of this and more. But perhaps it’s easier to identify particular authors who fit each element than anyone who scores a ten from each perspective. But I could attempt to argue that George Eliot’s Middlemarch achieves it all. Open the book at any page for evidence of Darcey’s beautifully elegant lines. See F. R. Leavis for an analysis of its greatness within the context of Len’s literary canon. My case for Craig’s inventiveness and a hint of Bruno’s full-blooded sensuality may be harder to make but I’ll begin with the latter, citing Dorothea’s awakening through art in Italy and the intensity of her consuming feelings for Ladislaw when she thinks he’s dallying with Rosamond. George (Marian Evans) was herself a passionate woman and while she idealises her heroine (arguably the more virtuous self she herself aimed, as a girl, to become) she gives her flesh and blood and emotions that are hard to control as well as goodness. This brings me to the demands of Craig, which constitute in writing terms a distinctive, vivid voice that’s new – and in Middlemarch in particular my favourite author meets them. Her asides to the reader, her philosophising passages on society and human nature may not be to twenty-first century taste but in her writing she is fully herself, all heart and intellect and sharp wisdom. And as for daring ambition, she constructs a microcosm of middle-England peopled by characters of many classes and attitudes, connecting them with a plot that surprises (Bulstrode) and moves us. It’s a virtuoso performance. I doubt whether any novel could ever earn the perfect score, but as Len would say, if Middlemarch doesn’t make the final, I’ll… pickle my walnuts?

PrevPreviousDeath: the biggest theme of all?
NextWe are one and we are manyNext