We are one and we are many 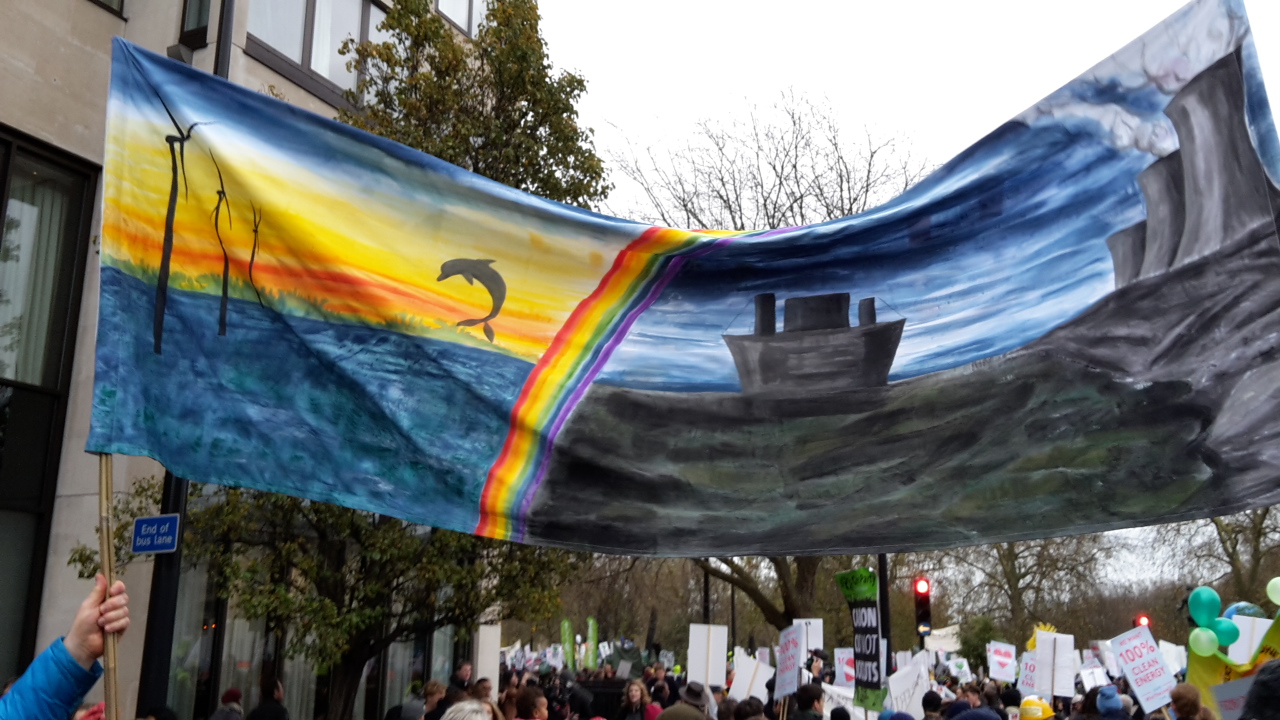 I was on the London Climate March yesterday and in spite of terrible weather, it was the most enjoyable demonstration of my adult life. Of course there’s always a deeply encouraging sense of solidarity after living at times with a desperate sense of crying in the wilderness. It’s rather like feeling isolated and vulnerable as a woman without any hair until you attend a conference with Alopecia UK and at once the crying makes way for laughter. Yesterday’s crucial expression of fear and hope as world leaders gather at COP21 – to decide whether they’re prepared to take action to ensure our survival on this earth – had the warm, generous spirit of a carnival. It was a riot but only of colour, and all around me I enjoyed the fruits of creativity. Even before the sea of people parted for Greenpeace to glide through, with a polar bear in an Arctic habitat on wheels and snow to fly through the rain and wind, the costumes made me smile. There was a hat sprouting wind turbines, a tree on wheels, a dragon, a few angels and a Dalek warning about the extinction of the human race.

Although the tabloids may find a hostile or abusive slogan, I saw none. Few were as left-field as ‘Ask yourselves: What kind of world are we leaving Keith Richard?’ but alongside some that shocked with facts and figures there were many examples of sharp and original wit. The ex-teacher in me felt proud of this enormous class that waited with patient good humour and behaved so well in challenging conditions. Those challenges can feel overwhelming. One friend began with a chant that acknowledged the despair underlying the commitment: “We’re all going on another climate march!” to the tune of Yellow Submarine. And the weather was wild, making a sail of our glorious Dacorum Green Party banner and trying to drag our ship off course. We posed with it outside a closed-off Downing Street, mindful of an energy policy apparently working FOR climate change – rather than to avert the chaos and destruction it’s already wreaking in the most vulnerable countries where the poor bear the brunt of government inaction. We had fun on the streets of London but yes, there was a point when I cried inside, in recognition of the urgency and the scale of the problem, because the human race as represented around me – smiling, encouraging, respecting, connecting, and full of faith in some God or in humanity – is worth saving. And I’m afraid, because it’s hard to sustain the same kind of faith in those leaders meeting this week. We may have to march again, and keep tweeting, and talk to people, and move our money and do everything possible to lower our personal carbon footprints. Giving up is unthinkable.

I love children and there were plenty there, some of them small and riding on the shoulders of adults they trust. At a school not long ago a teacher said, “So you’re an author and an activist?” and I answered, “Yes. I passionately believe that we have to take better care of this earth and each other.” She agreed; how could she not? And she talked about sharing this belief with her pupils. On the phone, when Leslie explained to the high street bank that’s losing our custom because it won’t offer an ethical account, he was told by several individuals, “We all want a better world.” Of course we do, yet so often cynicism is seen as grown-up and idealism as naïve. I DO want a better world and my activism isn’t just on the streets of London or on social media but in the novels I write. Stories can change us and I won’t forget the boy who told me, after reading THE WATERHOUSE GIRL, “You made me a better person.” I sometimes say to young people with alopecia that creative expression of feelings can be empowering; it’s something Leslie and I experienced recently when we found a healing, creative way to celebrate the life of a dear friend after her death, knowing how happy it would make her.

On 29th November 2015, along with millions engaging in 200 events across the world, I felt the energy of that creativity. Nothing is more creative than hope and nothing is stronger than love. Not profit, not status, not firepower, not competition. Not terror or bombs. I believe in the power of love. It’s the message that underpins my books and whatever happens in Paris, that won’t be changing. Everywhere on that route there were placards with hearts: For love of… the children, animals, trees, each other. The conviction that united us across the world yesterday is love, and that’s why we cannot fail.

PrevPreviousFrom Strictly to Middlemarch – in a few smooth moves?
NextOn fronted adverbial openers… for a start!Next