Finding the character – without words! 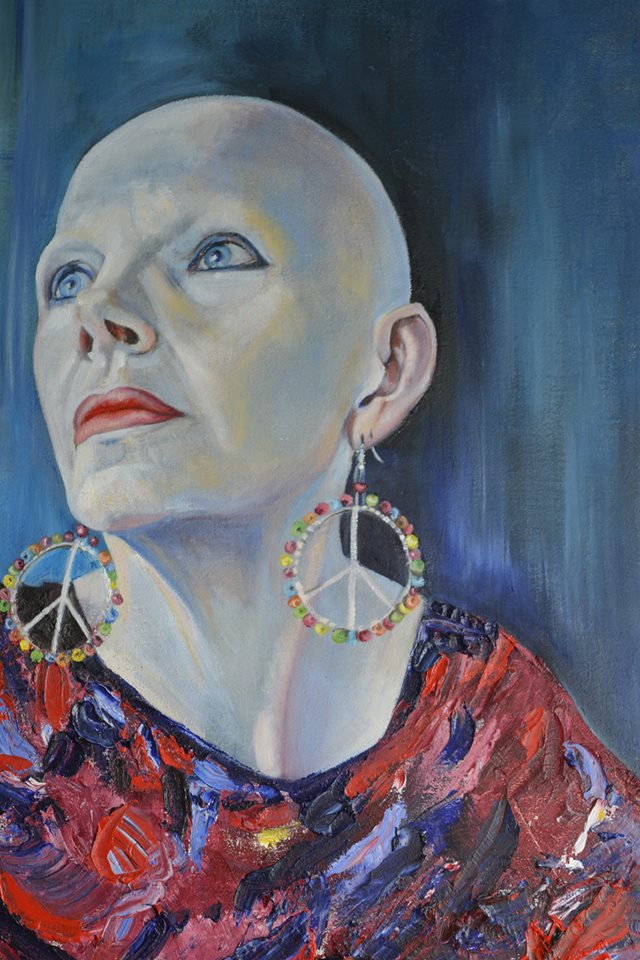 When Sheelagh Frew Crane asked to paint me, I was delighted because I’d seen her moving work on voice hearers and she’d become a dear friend. She sat me on my sofa and asked me NOT to smile but to think my own thoughts and let my body do what it usually does. I also danced in my own way, because when I do that I express something very personal and fundamental. We talked a little about feelings, and I could be open, as she is herself, because I trust her completely and love her too. And all the while, Sheelagh was taking photographs. I didn’t know which one she’d choose as the basis for her painting but instinctively she chose the one that carries most of me with it. She’s shown the sadness but also the peace and the ideals. My own creative joy is there too, in hers! And the other sides – the ratty me, the despairing me, the hopelessly helpless me – have all been left out of the frame.

Friends who have known me for twenty years, forty, have remarked that Sheelagh has captured on the canvas something hard to put into words but essentially and powerfully true to who I am. She’s found the best of me. Someone has said I don’t need to write another book now because it’s all there in this painting, and I think she meant the spirit that underpins all my stories, whatever genre. But it’s Sheelagh’s generous, intuitive spirit that made it possible, along with her skill. And this has made me think, on the day when Good Housekeeping kindly sent me the photo from the August issue – the image chosen from about a hundred at a shoot lasting several hours – about the differences between a painting and a photograph when it comes to portraits.

Media photo shoots are surprisingly tiring. Only big smiles will do, so it’s a bit like being a bride – except that after a few shots everyone (photographer, assistant, journalist, make-up, wardrobe) gathers around the laptop to scrutinise each image, discussing it in fine detail – as a result of which, the subject finds her nose dabbed or skirt pinned, or is told to turn her head a few degrees one way or another. And so it goes on. Then someone suggests a change of top and it all starts again. I don’t know for sure but I think the final image used by Good Housekeeping may have been airbrushed, because of the objective. I know it’s not a lesson and there’s no Ofsted to demand that such a thing must at all costs be identified, but the honest truth is this: the aim was to make me look as conventionally attractive as possible, eliminating flaws along with bra straps.

Media interest in me is generally aroused by alopecia, not my writing or Green activism, so if this helps society to accept alopecia and to widen the parameters when it comes to the appearance of women, that’s positive. I’m quoted saying that Leslie ‘told me I’m beautiful and I really believed him’, and while I’m not convinced I used those words – because I believe beauty is within, and the surface is seriously unimportant compared with the depths or core of our unique selves – I might have done, because ‘beautiful’, like ‘love’ is a word that stretches to fit flowers, music, acts of kindness, poetry, the light through the trees in a forest…

In other words, we call something beautiful when we love it, deep down in those depths or that core. That caption above my photo in the magazine is another way of saying that Leslie made me feel loved, which helped me to accept my outer, hairless self, and I think my smile illustrates that assurance. For women with alopecia this is a very powerful statement because it’s easy, in a world where women are ‘meant’ to have fabulous hair, to feel unlovable. To feel as if we can’t belong to the crowd because the crowd won’t let us in. So as an Ambassador for Alopecia UK, I hope my own objective is achieved and I’m thankful. But someone said I look elegant and that made me laugh because I’m not. My style is colourfully wacky and I don’t aspire to be ‘normal’.  So I prefer the photographs taken by Mikaela Morgan (see my Home Page) and Cynthia Nolan of Shoot-Me Studios, not just because I’m in my own clothes – and at photo shoots there’s no way they’ll allow my rainbow peace earrings – but because in a local environment with photographers I know, I may be smiling for the camera and even posing as directed but I feel more naturally myself. And they promised they wouldn’t tamper with my blemishes!

I’ve seen some wonderfully intense ‘arty’ photographs that go soul-deep, some of them black and white. But just as the novel is different from a poem, photography and painted portraiture are two different art forms. In the age of the selfie, the 3D movie and videography installations in galleries, an artist with a paintbrush can reach beyond the lens and illuminate something mysteriously other: the person within, and not just in the mood or moment. As a novelist I’d call it the character. I’ve found a few portraits from the National Gallery or Portrait Gallery where my dear dad often took me, which illuminate that too. The John Donne (artist unknown) always reminded me, as a girl, of Thin Lizzy’s Phil Lynott, and I thought he was gorgeous. What I appreciate now is how perfectly the sensuality of the man’s poetry is reflected in the figure on the canvas. I chose Germaine Greer by Paula Rego because it shows her refusal to conform and her physical and intellectual vigour, and the Van Gogh – lesser-known – because in it he exposes his pain and fear. For anyone who knows nothing of his life, it tells the whole story. It’s a psychological autobiography and it’s haunting.

One again, Sheelagh Frew Crane, thank you. When I say your portrait is ‘beautiful’, ‘I love it’ is exactly what I mean. I’d like to live up to it. 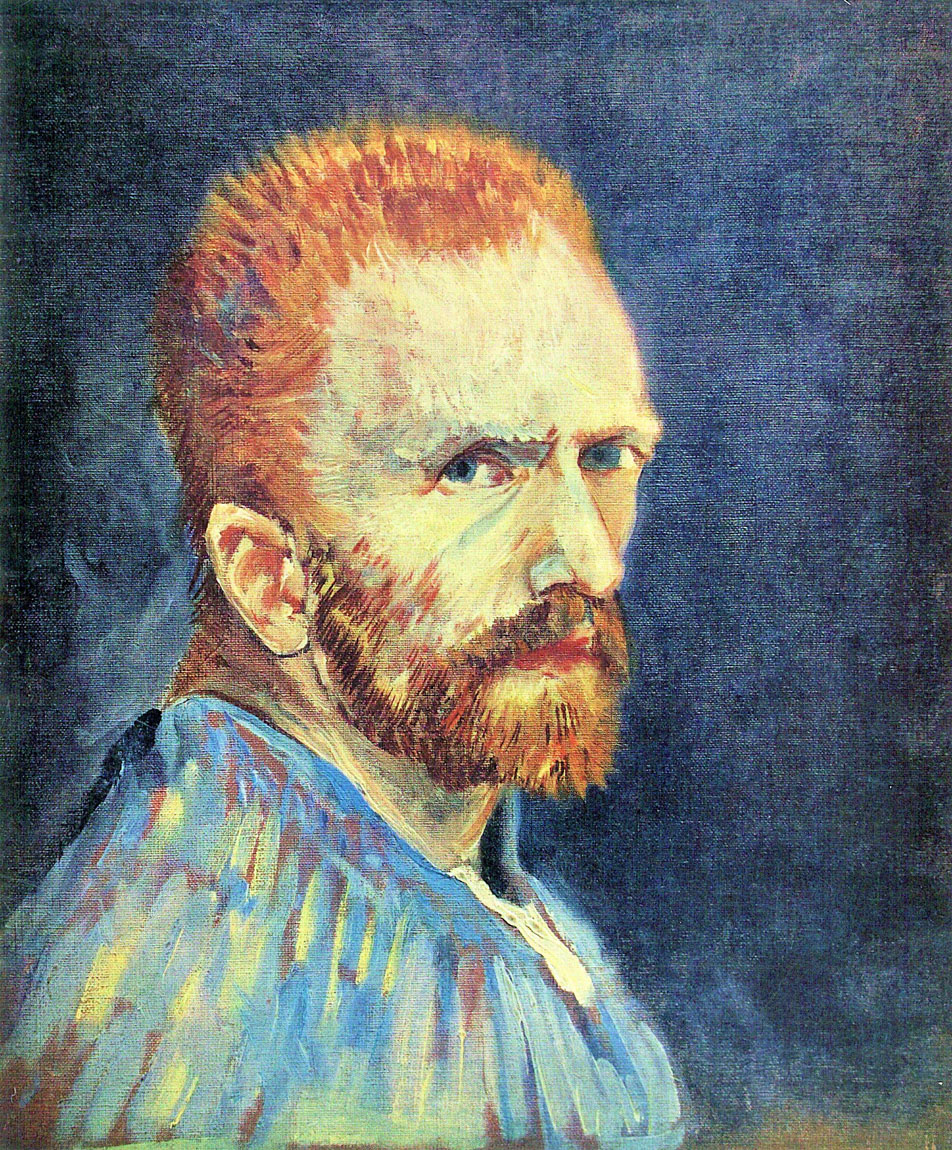 PrevPreviousSixty years! And what have I learned?
NextThe Olympics: the good, the bad, the ugly and the beautifulNext