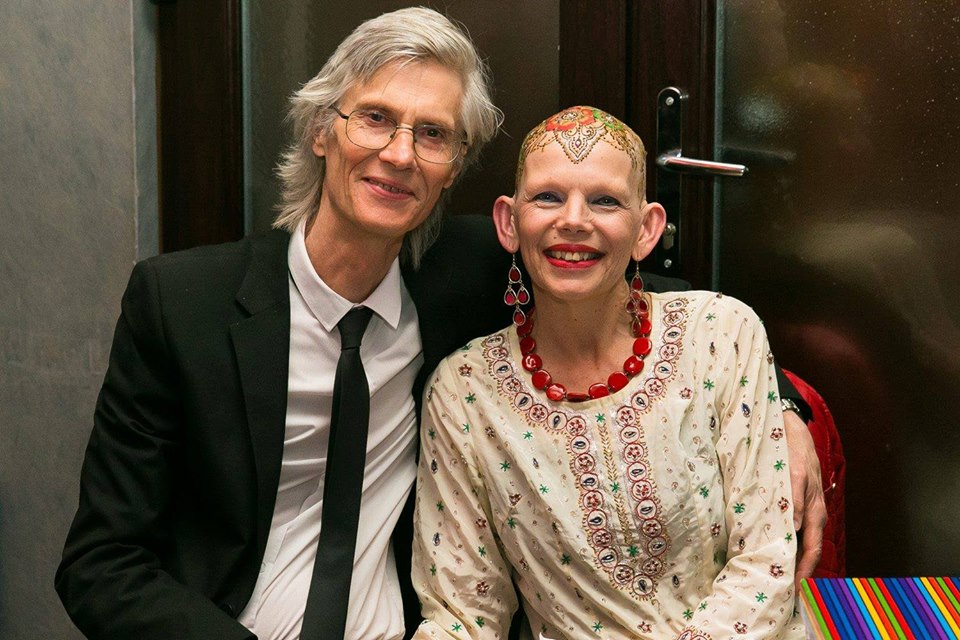 We’re Authors in Love but even at first glance we’re the odd couple too: the long-haired ex-hippie and the bareheaded woman, both of us favouring red except when we choose multi-colour. Our friend, actor-director Mark Crane, calls us #RealGoneCats – which in view of our combined age of 127 delights us no end! But there’s more to the straight guy I love than his charity shop waistcoats and look that says ‘I could have been a Rolling Stone’ because at home my very-male husband wears skirts. And it’s not something he’s ever been able to tell his mother. Although through our relationship it hasn’t been a secret, it hasn’t been public knowledge either – because as he explains in Heaven’s Rage, there was a time before I knew him when he was outed, cruelly and without principle, by the newspapers. Walking the streets of London in a skirt had always been dangerous; after that traumatic experience he chose self-preservation. Now the time feels right to own his identity as a cross-dressing man, and I’m proud – and moved – to hold his hand.

I met Leslie Stuart Tate on February 20th 2006 in a West End restaurant not far from the National Gallery. But we’d already connected, as a result of Guardian Soulmates, by long and open letter – and we’d spoken, at equal length and with unflinching honesty, on the phone. I was fragile and guilt-ridden after leaving a marriage after 25 years, and I’d told my G.P. that I didn’t expect any man to want me. After all, I was a woman with no hair at all and hiding my bald secret under a wig I thought I needed to survive in the world. Not long into our first telephone conversation I explained to the stranger I’d liked at once – but whose face I could only imagine – that I had alopecia.  Then I listened. For the pause that I could fill all too easily with the thoughts I ascribed to him. For the embarrassed or even horrified struggle for words. For the burning pan or ring on the doorbell that meant he must rush off. Or even for the click without explanation that ended the call.

“That’s interesting,” Leslie said, and admitted he’d never heard of it. That was when he told me he cross-dressed. I knew the term and rather liked Eddie Izzard but that was the sum total of my knowledge and understanding – so we both had a lot to learn. That phone call lasted the best part of an hour; I can picture myself sitting on the carpet of the little flat I was renting, smiling from ear to ear, captivated. I was talking with a man who loved Hughes and Plath, Shakespeare, Dostoevsky… and Van Gogh, Cezanne and Monet… and talked about language, feelings, music, the natural world, ballet. A feminist socialist who’d taught like me, but in Secondary and F.E. This was a wise, deep, sensitive and eloquent soul – with a big, abandoned laugh and sense of fun and adventure. Afraid as I was of making a mistake, and doubting as I did my capacity to endure more pain or conflict, I was half in love even before I read the poems he sent me. Without those, I might have called off that meeting in the Indian restaurant. But, read and reread, they confirmed everything I hoped.

Did I have reservations about a man who wore women’s clothes? I’d be lying if I claimed none. I would have sworn myself free of prejudice of any kind, but in nearly fifty years I’d only ever counted one (openly) gay human being among my friends. Many years earlier, as a young mum, I’d seen my elderly male neighbour at the window in a bra and I’m ashamed to admit that I told friends as gossip or even a joke. I’d grown up since, but the LGBT community was outside my experience. A friend warned me he would turn out to be gay or bisexual, even if he didn’t know it yet. Another told me a story of a cross-dressing colleague with dark, angry psychological problems. Would I have responded, myself, to a lonely heart ad by a cross-dressing man? No. Did I have the thought, ‘I just want a normal man’? Well, yes – although I reminded myself of the Jack Nicholson movie As Good As It Gets, in which Helen Hunt says the same and her mother tells her, “Honey, we all do. But there’s no such thing.”

You could say everything has changed rather dramatically for both of us since we met that evening, shared our secrets, held hands across the table and knew this was it. I could say I knew even when he walked through the door of the restaurant and I recognised something in the physical presence of him that fleshed out the voice and the poems, and seemed a fit, a match. He wore men’s clothes; I wore a wig. Outwardly there was nothing striking or unconventional about us. But what we established by holding nothing back across the table was a trust and an acceptance of each other just as we were. Our histories were different but ridiculous as it sounds, by the time we kissed goodbye at Euston, we both knew we’d taken a bold step towards a shared future. Six weeks later we agreed to move in together – and there really was a double rainbow at the window.

Now, after more than ten years as a couple – tested by health issues including pain and surgery, and the harsh realities of the book business for two full-time writers trying not to lose heart or faith – we’ve grown closer and stronger. It was with Leslie’s encouragement that I first stepped out of our front door without a wig, and I haven’t needed or wanted one since because I feel loved, liberated and fully human in my difference. And in the schools I visit as an author, I share the message that we are all of us different in our uniqueness, that our identity lies deeper than hair or clothing, body shape or features, and that diversity enriches our species. We’ve changed each other. Leslie was an agnostic meat-eater when we met. Now he’s vegetarian, I’m vegan and we go to Quaker Meeting and an open-minded, caring church. We belong to the Green Party, admire Corbyn and abhor the tabloids that incite hatred against those who are ‘other’ and therefore dismissed as less human than we are. We’re both one unit and two extremely different personalities. And I no longer feel any interest in a ‘normal’ man. In fact, I dispute the whole concept of normality and wish everyone free of its tyranny. In this world we are richly various in every conceivable way.  Our survival as a species may depend in part on our ability to unite and address – in climate change, war, the refugee crisis and rampant inequality – much greater problems than any we might find in how others dress, worship or make love.

I love a man who loves me, believes in me and has given me the courage and freedom to be myself. He’s gifted, charismatic, funny, intellectual, eccentric, wise, passionate, vivid, ferociously determined and sometimes angry. His flavour is strong, spicy and intense and not to everyone’s taste, but nourishes and excites me. I adore and owe him, need him and support him, in all his complexities, flaws and contradictions, in the whole of his soul. Do I fully understand why he needs to dress like a woman? No. But I know that need goes deep in him. I have friends, with hair and with alopecia, who don’t fully understand why I choose to go bareheaded in the world. There’s no equivalence here but in our different ways we reject exclusive and limited models of masculine and feminine, of what’s attractive or acceptable out there, of a one-size, one-style view of humanity. I’ve believed, since I read those poems before we met, that he’s a fine writer with a distinctive and original voice. His novels (two published so far) in the Lavender Blues trilogy have inspired me. Now in Heaven’s Rage, out soon, he offers an imaginative autobiography exploring imagination, childhood, music and gardens, alcoholism, illness and, yes, cross-dressing. Even in 2016 that takes courage. And I love him for it.