I’m only dancing (on and off the page)

I may be obsessed with dancing. Even though I longed to be an author from the age of six, pirouetting for a living would have done me nicely. Lorna Drake, ballerina, was my favourite heroine in Bunty, and when Dad took me to Covent Garden for The Nutcracker or Coppelia, that world on stage seemed even bigger and brighter than the imagination within me. But there was a problem. These humans had the delicate beauty of flowers and the power of goddesses; I was a frizzy-haired podge with a blush I couldn’t control. An unfortunate left/right error in a dance class – which earned my wrong-facing cheek a slap – convinced me that I couldn’t learn other people’s steps. I’ve never earned one certificate for ballet, tap or modern. Nonetheless, dancing is part of what I do and who I am. That includes my way of greeting the morning, receiving the light and expressing gratitude in love: an alternative kind of meditation or prayer. It also includes bopping in the kitchen. And when a talented friend, Julie Williams from the band Hidden Jules, adapted some words I’d thrown her about alopecia into a beautiful song, it wasn’t long before I was illustrating the lyrics with moves. I don’t expect dancers to be impressed. My style may owe more to the kind of actions we teach small children for The Wheels on the Bus than to the innovative performances I enjoy at Sadler’s Wells. But it’s an expression of feeling and I hope that makes it a connection of a kind.

Firstborn of all my characters was Daisy in The Waterhouse Girl and it’s not surprising that this girl, who was in many ways a braver, more committed version of me when I created her, is also a better dancer! As an individual, though, she finds her own steps – and with them, freedom from everything that could make her a victim. The joy of it builds her strength. And it doesn’t matter that not everyone ‘gets’ what she does because it’s hers anyway. In the sequel, Crazy Daise, prisoner-of-convention Rowan doesn’t know what to make of the way Daisy moves.

If hair is useful to an author because of the vast vocabulary it offers, dance is richer. Different styles yield their own moods and associations, cultural contexts and flavours, but underpinning all of them is something personal as well as technical and potentially emotional. In Gorilla Dreams, a story of confounding expectations, dance sets both my characters apart. It also has its contrasting registers. This extract shows how at the climax the imagery becomes dream-like:

His coat as dark as the evening light, the gorilla held her high. He raised her like a fallen star. He trailed her like a gown that whirled around his legs. From his arms she hung like a ladder, swung like rope and fluttered like a moth. In his arms she speared and rolled, and laced the twilight. Silvered and gleaming, the pair of them streamed. Curling and overlapping, they sparked like fireflies. They etched the darkness with patterns more intricate than cobwebs and bolder than sunset. So light were their steps that the evening hush gathered unbroken around them.

In Ravelled, my short story collection for adults, dance is almost elemental for Nei Bubura: Through the sounds of sea and wind, she breathed the lightest notes she knew…  stretched as if to find the clouds and pick them. It’s an expression of desire and a choice of identity for my Seventies teenager Marilyn, moving in her bedroom to the albums her parents banned: ..and danced as if Jim Morrison was holding her, one hand on her bottom as she swayed. And for elderly Gerry, dependent on a stick but declaring an intention of facing the music, it’s a metaphor for rebellious survival as well as loss.

Recently I went to a school in Basingstoke to support a remarkable Y5 student called Chloe who is now experiencing alopecia for the second time, determined to own it and take control. Beginning with a letter to the school governors, she’d organised an alopecia day, created a display about Alopecia UK and suggested fund-raising Mad Hair fun to include the teachers. Her wisdom, humour and spirit were inspiring, and I was delighted to meet her – even before I discovered her passion for dance. Unlike me, she’s clearly very good at it, but more importantly it gives her joy. That’s a word we hear a lot on Strictly and I could see it on Chloe’s face when she talked about dancing. With zero sequins and very little talent, I feel it too. So I don’t suppose I’ve finished with dancing, on or off the page. 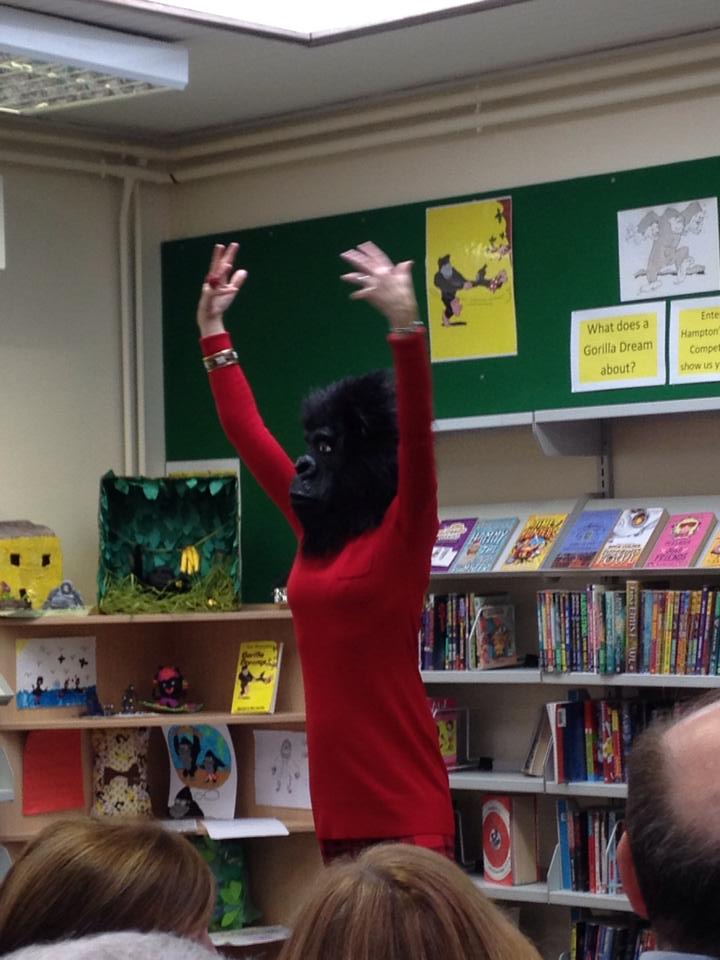 PrevPreviousThe power of fiction: novels that changed me
NextBetween the lines: a kind of loving?Next