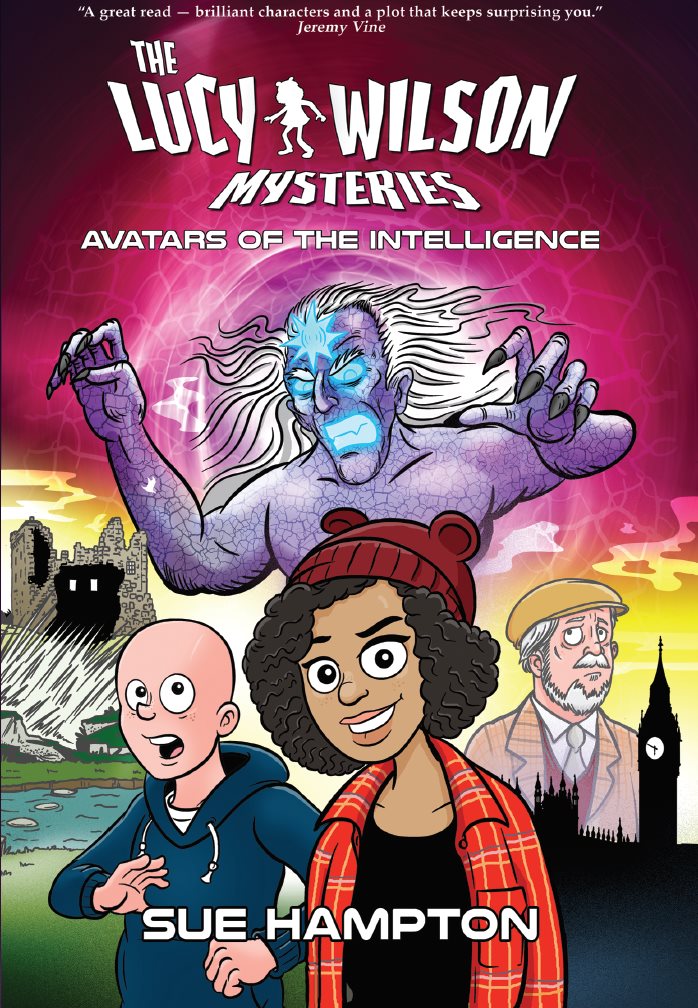 When the BBC announced the #13thDoctor as a woman I had my own reason to smile. Having been one of those children who hid behind the sofa in the black-and-white Lethbridge-Stewart days, I never ventured back to Doctor Who – even once latex and dodgy sets were replaced by CGI. But recently I’ve returned to sci-fi and it’s taught me more than I expected. In the week of the earth-shaking announcement from the BBC, I was proofing AVATARS OF THE INTELLIGENCE, the first in a children’s series called the Lucy Wilson mysteries, ready for a preview run. Like its publishers, Candy Jar, I celebrated a female Doctor, and hoped that my own action heroine will mean something to girls who meet her on the page – but to boys too, and their mums and dads and grandparents. Lucy Wilson’s world may not be as real as ours but it’s not so different either, and we need girls like her. We need boys to respect girls like her. And we need other girls to respect her too.

I’ve explored almost every other genre. Each one has its register and, to a greater or lesser extent, its rules in the form of expectations (even though I sometimes like to push those a little). Being a form of fantasy with a credibility built on science – often undiscovered but already imagined – sci-fi offers a heady freedom but also parameters. The idea is to develop something fresh within a tradition readers recognise and demand, and there’s a limit to how much this can be achieved through language and style. But in any case for me the characters always carry the narrative and make it matter. The rest is context. At the core of any good novel, whatever the genre, are the central character’s feelings and relationships, needs, strengths, weaknesses and unique, complex wholeness. Cue Lucy.

In her case, I was given her in the sense that she has a heritage, a family tree that’s copyrighted and can’t be tinkered with. It’s in her blood. But when I show children how to create a character in school I tell them these passport details are just the start. I help them find various angles from which to explore the character they imagine, and when we think about three defining adjectives there’s one that springs more forcefully to mind than any other. In an adventure of any kind, real-world and emotional or sci-fi and powerfully wild, courage is essential. A character that lacks it at the start will have to find it. And in Lucy’s case, it’s not the lack that’s a potential problem but the excess. She knows no fear, and young readers will know how vulnerable that can make her as it pushes her beyond the usual limits. Naturally there’s an exception, but they have to wait a little for that, with the clues lying low where clues should. A character with no Achilles heel is an intolerable and preposterous thing! But courage in action has to find a wider remit than resisting the evil that is the Great Intelligence, and right from the start, even when she’s being stroppy and awkward about being dragged away from her London life to Ogmore-by-Sea, it kicks in as she defends Hobo, the boy she’s just met – a boy whose bald head isn’t the only thing that makes him different. Lucy has a strongly developed sense of justice and that means resisting everyday evils like prejudice and bullying too. All of this makes her a heroine we might call feisty and committed, but she can’t be too perfectly  admirable for readers to connect with if they know they wouldn’t dare stop the bully in her tracks. Lucy’s enormously spirited and imaginative but she can misjudge situations and is sometimes, like girls her age, unreasonable. More than that she needs, like most strong characters, to be funny – and that means sharply witty, but it may also make her just a bit ridiculous at times. As we all are.  She’s terrific, but she’s reassuringly flawed. I hope I’m not the only author who loves her characters with a passion and Lucy is no exception. In more senses than one, I believe in her.

As the inheritor of the legacy and as the character present in every scene, Lucy Wilson is the starting point of this novel and series but like any of us she needs a friend who will not be an echo or variation but an individual to challenge her. In Hobo this sci-fi hero finds anything but a glamorous assistant, and when the Head of Publishing mentioned a boy with alopecia I did picture a hook reaching for my throat. But while I’ve explored alopecia in two children’s books, it’s defined them in the sense that for my ‘sufferer’ the experience of hair loss is the framework of the narrative. What I saw was an opportunity to create a boy who only happens to live with alopecia. What defines Hobo, apart from his ‘anagramitis’, is his intellectual energy and sense of fun, along with a deep inner strength and kindness. Of course I also saw an opportunity to shed light, for children unaware of the difficulties, on this interesting condition – while celebrating diversity in a broader sense (Lucy is mixed-race and one of her brothers is gay). So I was happy to be hooked.

It’s my thirty-first book and my first foray into sci-fi. Once I found my bearings in its thrillingly liberating world, I had a blast. Oh, and if you want to read into this non-violent battle with the Great Intelligence any kind of political comment about government, consumerism or certain toxic and controlling tabloid rags – and see Lucy and Hobo as leaders of the resistance – don’t let me stop you!

“A great read — brilliant characters and a plot that keeps surprising you. Sue Hampton writes in three dimensions! Avatars of the Intelligence draws you in from the very first page. A great read for teenagers (and their parents, actually).” Jeremy Vine

N.B.  Candy Jar publish the Lethbridge-Stewart books, under license from the rights holder, the Haisman Literary Estate, and I’ve already contributed two short stories to Havoc Files collections built around the character. One of them introduces Lucy. Publication day for the first Lucy Wilson mystery  is 29th March but I have preview copies for Whovians and any others who can’t wait. 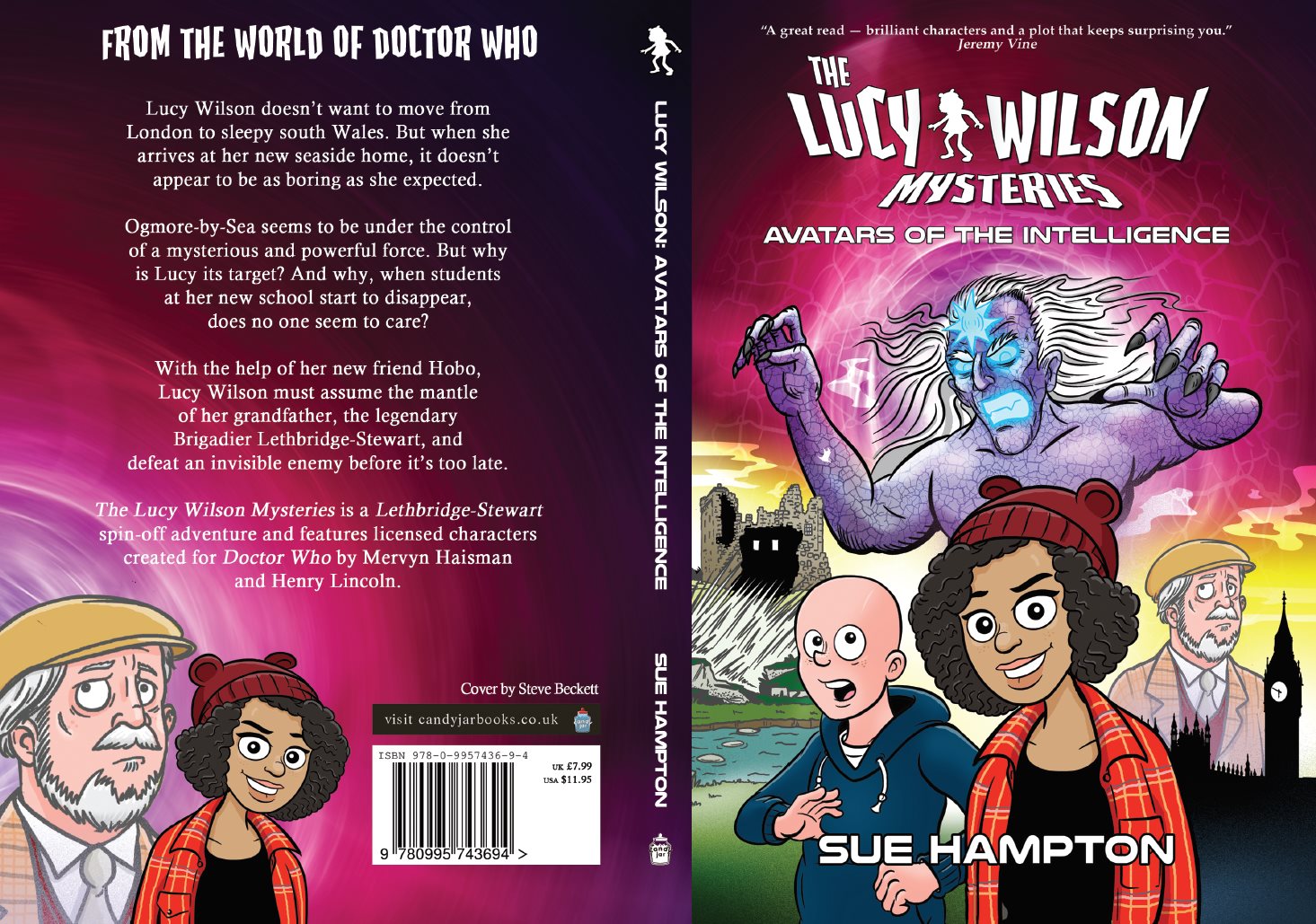 PrevPreviousInside VIOLET: the review (it’s personal)
NextFrom author to readers: feeding back on the feedbackNext