You can call it forest bathing, therapy, time out or exercise. For me as a Quaker it can feel like Meeting for Worship in open, inner stillness. Because we’re together, holding hands when the path allows, it can be romantic, a renewal of what bonds us. And we don’t talk about war, climate change, refugees or Fascism. Just for a while the crises we face as a species, and on our screens, seem distant and implausible. Woods are particularly dreamy on a warm Sunday morning in summer when few humans are awake but the sunlight softens and fragments through leaves. This morning my husband Leslie and I stepped instantly into the immersive green, and an almost pristine quietness. Sometimes we talk about what we’re writing, or what fiction does and means. Sometimes we need silence. Today I was ready to receive, and the great thing about trees is that they keep giving. I felt a lightness, and a child’s fascination with the mysterious detail that can seem so ordinary to modern homo sapiens wired for sound. A sense of deeply connected peace is with me still. It’s a kind of healing.

And we often feel damaged. In THE JUDAS DEER, Jeth finds it hard to trust, to belong, to conform – except in the forest, where the life around him is both safe and magical, and his imagination soars. Writing those scenes it was exciting to feel the liberation of a troubled boy whose urban world had brought danger, at peace in an environment where he could live differently, adventurously, unafraid. Following him in close third person provided a different perception, vivid with wildly individual metaphors. In TRACES, the donkey sanctuary run by Poppy’s Aunt Lanky between woods is a graveyard as well as a hospice, but a place where damage can be outlived through care. Staying there, away from town and school, Poppy connects with her own family history and by encountering the pain of the past, mends the future. It’s not just the ghosts that make this possible but the river, the trees, the earth – all of them ghosts in their own way too.

Many of us are compromised, disappointed or angry, and there’s much to fear. I didn’t emerge from the woods to find Trump has made way for Sanders or May for Caroline Lucas. As I walked, the fighter planes my country sells for profit kept flying through faraway skies. Bombs fell. People fled. In France, there are refugees for whom the woods offer a kind of shelter, but if they leave their tent in search of food and water, the police may have destroyed it by the time they return. So much for the wellbeing a forest can boost. But would war cease if those who make it walked in a wood, below snatches of blue – if they felt the otherness of something beyond, beautiful and generous, timeless and necessary, but also a joyous recognition of their own small thread in the web of life? Wouldn’t an experience so unimaginably big and so intensely intimate ground them in justice and love? As we emerged from the shade to the lane, these thoughts were with me. In a sense I emerged regenerated to keep working for peace, to raise money for more tents, to #StopArmingSaudi.

But this morning’s walk also offered up something quite unexpected. One moment we passed honeysuckle and foxgloves; the next we found rubbery toadstool houses: colourful, domed and apparently inviting us in – if only we were fairy-sized – to a tea table draped in a lacy cloth. Fairy Garden, said the small, low sign. I felt something of a grandchild’s delight as familiar narratives flocked in like birds. Eyes down, I didn’t see what Leslie had discovered: dinosaurs, six foot high, symbols of a kind of history so preposterous that it feels like fantasy too, as magical as the fairies. Smiling, we wondered who put them there, and what their story told. Humans have always made stories from forests – often with dark plots that reflect our vulnerability in a world we can’t control and whose power can inspire fear as well as awe. That’s the shadow side of the branches that break up the light, of a space that cools the sun. Trees breathe life but death is all around us. In a wood, time is a continuum, and we are older than the leaves above but younger than the roots below. The life in us is a mere moment to the earth we walk. Perhaps that explains the reverence that teaches us to respect that earth, all living things, and those whose paths and perceptions are different.

The forest is a story with no end, and, like the best stories, an education. 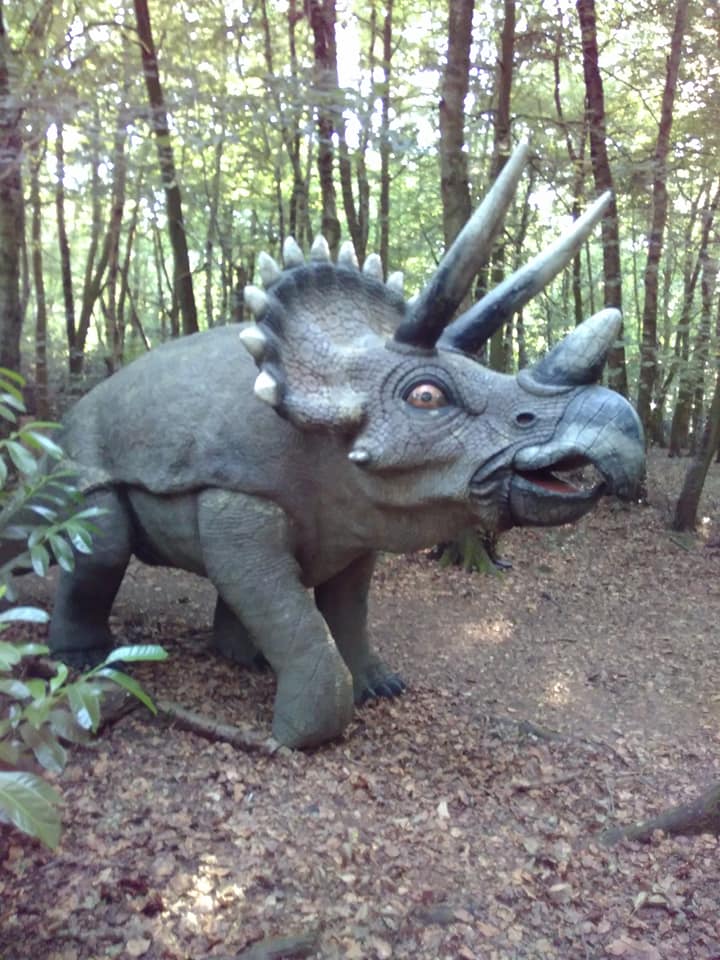 One thought on “In the woods: hope, healing and stories”