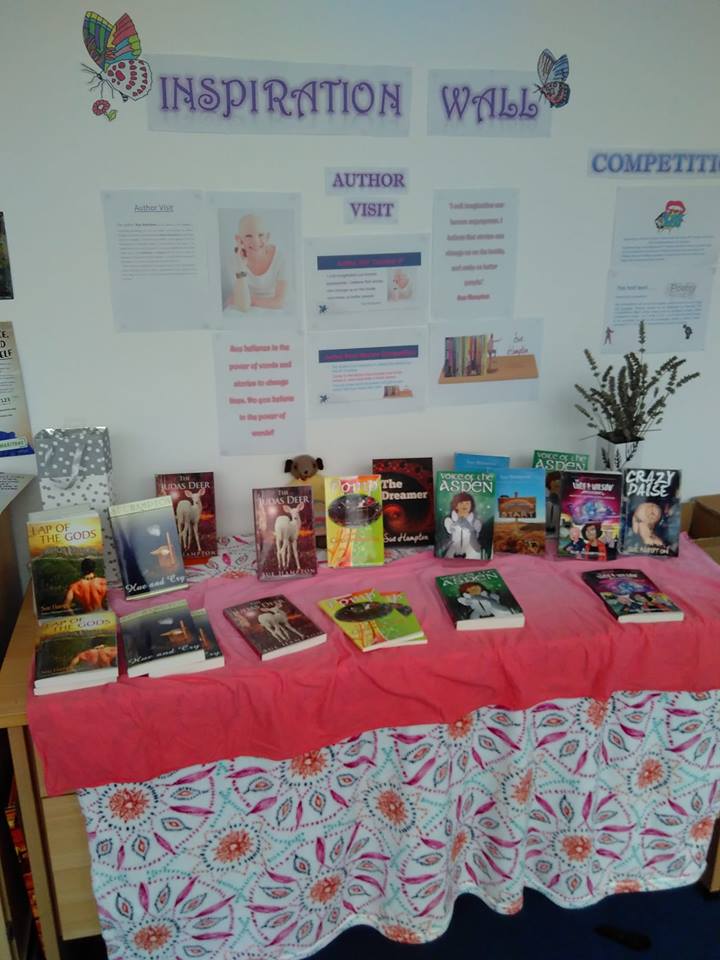 The excellent Amy Johnson at Alopecia UK asked me to blog about my five years as an Ambassador for the charity, and in particular about supporting young people with alopecia in schools. When my novel THE WATERHOUSE GIRL was published in 09, I knew of no other work of fiction built around a character with the condition. Writing this story, in which I drew on but adapted my own experience, changed my life. My hero Michael Morpurgo called it “beautifully written”, “insightful” and “poignant”, and encouraged by his words, I became a full-time author. I realised I wanted to be as brave as my character and made the personal decision to ditch my wig, partly so that I could make an impact when visiting schools as an author leading writing workshops – and educate students with hair about alopecia, difference, identity and respect. Children, teens and adults with alopecia contacted me to tell me that my book had helped them to feel understood, and less isolated. Stories are powerful and mine was making life just a little easier for readers who, with or without hair, felt different or lived with challenges. A Y8 boy with hair wrote, having read it, “You made me a better person.” That’s because stories develop empathy; they’re hugely important because through them we learn to see the world from another perspective, and understand what it is to live another kind of life. This makes us less likely to judge others, and helps us to understand them instead.

The first thing I did after being invited to take on the role of Ambassador was start a support group because there wasn’t one in Hertfordshire. I’ve also been asked to visit a few groups in other towns to share my story. The second thing was raise over £800 by dancing for four hours. I didn’t know at that point that in 2015 I’d recruit and captain a team on BBC2’s Eggheads, an alopecia team that won £29,000 for the charity in one of the best experiences of my life – an experience made possible by meeting so many fantastic people with alopecia, online and in person. Over the last five years I’ve represented the charity on radio and at fundraising events, and I do enjoy making a speech! I now have 32 titles in print/as an e-book, and in CRAZY DAISE (YA sequel to THE WATERHOUSEGIRL) and a sci-fi novel ‘from the world of Doctor Who’ called AVATARS OF THE INTELLIGENCE, I’ve written about alopecia again. There’s also a short story for adults with an alopecia twist in my collection RAVELLED – in which the bareheaded goddess is worshipped for her difference. But it’s my school visits to support students with hair loss that are genuinely special and rewarding.

I’ve lost count of how many such visits there have been, but the young people in question have ranged from 5 – 15, boys as well as girls. Sometimes I am contacted by AUK; sometimes I meet parents on the Facebook page and make the offer; sometimes I am approached by a teacher or psychotherapist. I used to go anywhere – Herts to Anglesey and back on the first occasion, to support the extraordinary Chloe, who was traumatised after a boy pulled off her bandanna – but at sixty-two I need to limit myself to Herts, Bucks, Beds, Essex, Northants and London. If the school is fairly local I’m happy to drop by for an assembly free of charge. As an author my income is very small, so if the school is interested in a day of writing workshops at £250, that’s ideal, and allows me to work with classes or groups of students, guiding them as they create their own characters with a difference. I aim to inspire in more ways than one! Most schools leap at this option which for them ticks two boxes at once, but if the budget won’t stretch to that, together with AUK I try to find a way forward. Of course it’s really important to communicate with the young person involved about how the visit runs.There’s no one-size-fits-all. My story may be the same but some children relish the attention and want to be centre-stage throughout the assembly. Some, like Esme, who writes stories too and also sang me a song she’d written, have something to say to their audience. Most prefer me to do the talking but I give them the chance to change their minds at the last minute, and Lucas, who preferred, before the visit, to sit unidentified under his cap amongst his peers, decided on the day to take a starring role after all. I usually talk about what we have in common and the differences between us, because that’s the dual message: we’re all unique individuals but we share a common humanity. I have a presentation with images. I also take along a song about alopecia, written by Hidden Jules using lyric ideas I sent, called This Song’s Her Own, which makes mums and teachers cry. Sometimes I even dance expressively to it! On one visit I found that Chloe, in Y5, had initiated and organised everything, including Mad Hair for staff and pupils. I aim to stand beside and celebrate the young person I’m supporting, and we usually hug. I also hug anyone I come across with alopecia on a regular school booking when no one has told me there is a student in a wig amongst my audience, but that student comes up to me afterwards to identify herself, often tearful but also smiling.

Some of these young people have experienced regrowth since we met. I always keep in touch if I can. I was asked to return when Joseph moved up from Infant to Junior School. I’ve been told every time that my visit was a huge boost or a turning point, and in all cases but one it’s put an end to any thoughtlessness, unkindness or bullying – which is great news and of course, part of the objective. Why the exception? I wish I knew why Sonny continues to feel disrespected. Maybe the fact that there were two children in one year group who shared that spotlight diluted the impact. All I can do is keep in contact and hope things change, with or without further intervention from me. These school visits have introduced me to caring parents and terrific families – I won’t forget the visit where a beautiful soul called Jude, who’d lost his hair to chemo too but was in remission, wanted to be at Finlay’s side. I’m lucky, as a result of my role, to know many inspiring young people. Some of them are unfazed by alopecia, like Isabella at the age of five. Some are disturbed and undermined by it. But all of them, in their different ways, are strong, kind and courageous, and I remember every one of them with clarity and affection. I consider myself privileged to know them, and be able to help. That’s why, for me, the problem that was alopecia really has become a gift.

One thought on “Alopecia: Ambassador in School”