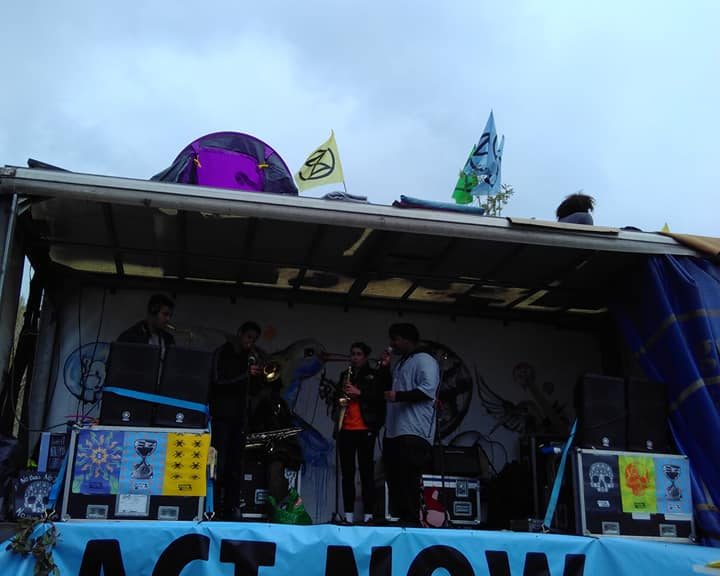 Glancing at the church at the south end of the bridge, Gem thought of Manda bedding down in the crypt. She felt guilty about her own good night’s sleep, but grateful for Skye’s and glad to be back. The press had no idea how much people were sacrificing but at least a Canon understood, which touched her somehow. “Such a blessing,” someone had said, “a real gift.”

“I love the spiritual roots supporting us all,” she’d told Nick on the phone the night before. “The way differences don’t matter. And the hugs.”

“I can do hugs,” he said. And he could: long ones that strengthened and understood. He’d fit in fine, but she couldn’t push. He had to choose to be there.

One of the rebels sitting outside the faded old church greeted her with a raised hand, and she waved back. On days without Skye her body seemed so loose and spare and unsettlingly alone. “I can take her to nursery and pick her up too. Leave you free to be rebellious! I’d be there too if I could.” And had she wondered for more than a few seconds whether she knew Angel next-door well enough, after a few months of chat on adjacent doorsteps? Gem reminded herself how easily Skye had accepted the idea. She was independent, strong: a cause for celebration but unsettling in its way, because she was so small and the world so hostile, so terrifying, that without the protective cocoon of their mutual dependence she didn’t know how they’d come through.

Approaching the banner behind the ROAD CLOSED sign, Gem smiled, returned a peace sign and looked for familiar faces.

“Hey,” said a bearded guy with NON-VIOLENT printed on his jeans. “Welcome back.”

Gem asked about arrests since she left.

“They came in waves and picked people off. It was kind of random. Not sure anyone was charged though.”

Gem nodded, imagining Manda being carried away, triumphant and defiant, thinking of Rob and his approval. Wondering how many hours people might spend in a police cell, she reminded herself she mustn’t allow time to swell and lose all shape and meaning just because here the living felt so new.

Someone was watering the plants gathered behind the banner, in front of the bee sculpture with its big, firm wings. And someone in a woolly hat was being interviewed, possibly for TV. Manda! She was shivering and rubbing her hands, her nose a little red, her hair splaying out and whipped by wind across her face. No sign of her new man.

Gem crossed to the right, alongside the National Theatre, and wished she’d brought a hat herself.

Manda was too tired to plan it. But the guy from a channel James had insisted he needed right at the start, complete with satellite dish – when she’d said BBC2 was the only one that didn’t disable her brain cells – was the pushy kind, so she’d better focus. The cold air should have been enough to clarify everything but her body felt stiff and old, like the crypt.

“So what’s brought you here?” the reporter asked, furry mic thrust her way as if there was some kind of rush. The camera focused on her looked heavy duty.

“Climate catastrophe,” she said. “An existential crisis according to the Secretary General of the UN.” She could never remember his name. “Governments aren’t listening so it’s a very gentle, non-violent way of waving the shocking truth in their faces. In everyone’s faces.”

“I’m sure you’re aware that some of our viewers are angry…” He sounded as if he might be angry himself, all of a sudden.

“Not as angry as they’ll be with our leaders when they realise their kids’ future is at risk and no one’s protecting them. That’s what we’re trying to do here.”

Someone next to Manda sat down with a bowl of thick porridge and a tin mug of coffee.

“So you don’t consider yourself a criminal?”

Manda’s eyes widened. I’d as soon call Farage a saint, she thought – briefly conscious that Jane Austen went everywhere with a woman like her. No wonder Rob used to tease her…

“I consider myself a grandmother,” she said, surprising herself. Oh yes, apparently she did. She tried to rerun inner footage of Skye’s face, and hear her strong, sudden voice. “That’s reason and justification enough. Have you read the IPCC report? Your viewers have a right to know what it says.”

“But you’re breaking the law…”

“The government’s inaction is criminal. They’re guilty of ecocide, along with BP and Shell…” The list was too long to begin. The reporter’s eyes wandered up over her head. Was she boring him?

“And you’re willing to be arrested?”

Determined. “Oh yes,” she said, and he lifted the mic, turning away.

“You’re welcome,” she muttered to his back, and for the first time imagined Libby watching, jumping up from the sofa at the word grandmother. As if she expected her delinquent mother to cut her out of her will and leave every last piece of pre-loved hospice shop furniture to Skye.

A police liaison officer arrived nearby, greeted by a woman who’d slept better than Manda and hadn’t stirred when she crept and stumbled her way to the loos.

The channel wouldn’t show it anyway. They’d look for someone younger and prettier, or grungier and less coherent. No blaming and shaming was one of the XR principles and she knew she’d sounded angrier than she should, on two hours’ sleep. It was a good decision by Leo to safeguard his back in his own bed – their bed – but he’d said he was on his way.

She hadn’t expected to miss him like this. And Rob would have loved him too.

Gem smiled up at the guy with the big hair on top of the lorry. Bypassing the porridge, she went round the other side to face the banner low along the chassis. ACT NOW, it said. From behind it, she heard singing, pure and sweet but with a fierce commitment: “I stand for love, even with a broken soul. Even with a heavy heart I stand for love.”

There was no one on the stage but technicians setting up. The voice came from below. Gem remembered the young woman her age who had locked on underneath. Still there, in her sleeping bag, and attached to what? An axle?

Wondering what, if the singer peered out, she could ask or say, Gem felt shy, not big enough to bother someone like her, someone brave. She could see from the empty plate and mug beside the banner that she had already been served breakfast. But did she need someone to take her place while she went for a wee, or did she have some kind of nappy? Gem supposed she’d sound like a child if she asked.

The song ended. A couple of young guys sitting on a grassy sheet playing chess looked up and clapped. In Gem’s head the song continued. Her soul, her heart. Perhaps not quite the tune she’d heard but something kept soaring and she didn’t want it to stop. People were gathering by the steps up to the lorry stage. Someone emerged from a tent, hair in a top knot, and squinted into the light, which looked brighter than it felt. He smiled at Gem.

“Another great day,” he said, and padded off barefoot.

A flag with its egg timer logo beat itself in the wind. Stepping up from Oxford Circus tube, James heard the rhythms a moment before he saw the pink boat rising above human waves. The roundabout was occupied and surrounded by onlookers, some of them police. The energy felt young, and he saw as he approached that most of the protestors were exactly that. Plenty of hair around, making his seem thin. Some of it belonged to a slight youth dressed for summer, dancing on the deck as he led a chant: “Extinction!” which was met from below by an emphatic, “Rebellion!”

James wondered whether his oldest brother Tim would tell him it was like 1969 all over again. Being a stockbroker hadn’t stopped him admitting when drunk that it was his favourite year. And towards the end he’d been drunk a lot.

Edging through towards the centre he could see that a number of people were lying under the hull with its message TELL THE TRUTH. Glued, presumably. If he were Cressida Dick he’d issue orders to delay the solvent and let them stew. Although to be fair, they must be frozen as well as stiff.

The boat is where the heat is, Tanya had told him when he messaged to ask if she was filming the protest – mainly to show he’d dealt with her own truth and could be friends of an occasional kind. And once he’d decided to observe what was going on he’d had to be prepared to see her there without taking a hit.

Closest to the boat, people were sitting in an arc, not all of them hairy. One, balding and mature, might have been a chartered surveyor or a civil servant. There were girls as well as women, younger than Libby. Now the dancing dude led them in singing, “People gonna rise like water, gonna turn this system round. In the words of my great-granddaughter, climate justice now.”

No sign of Tanya amongst the film crews. James had been standing for a few minutes, glad of his best wool coat and scarf and oddly conscious of the shine of his polished shoes, when the police who’d seemed as neutral as him up to that point began to move in – a dozen of them, twenty. Like defenders marking strikers they attached themselves, one on one, and began to issue what he took to be warnings while the singing continued, the same song again and again but the rhythm stronger. Then a boy with dreadlocks, probably a student, was lifted and carried out, and above the song he heard shouts of “WE LOVE YOU! WE LOVE YOU!” with whoops and cheers.

An older woman, grey and churchy, was escorted off, one blue plastic police glove light on her arm. Next to her, with an officer leaning down to her, sat a pink-haired girl looking so confused he wondered whether she spoke English. People he suspected were legal observers were scribbling on notepads and talking to the arrestees, but did she even understand? Maybe she’d only been curious like him. Either way he watched her taken, loudly assured of the crowd’s love. A tall man in a hooded Parka jacket was next, his body flopping to make the load harder to bear. As four officers carried him away James saw his eyes were closed, his face calm, almost beatific. James had had enough.

A few more vanloads and they could clear the place, and that was their job, whether or not the tabloids told them to do it. But it was more disturbing than he’d imagined and he didn’t exactly know why.

As Libby and Trey left the office for the West End she hoped her elation at being on his team didn’t show. It was a biggish client, a show of faith in her.

“If we’ve got time shall we stop off at Oxford Circus?”

She was probably staring now. “Why?”

Libby shook her head. “Let’s not.”

“You’re afraid your mum might be one of them?”

She nodded. Trey looked at her as if he understood. Could he possibly understand what she didn’t? She nodded.

“Do you want to have dinner when we finish?” he asked. “You choose where. I think you need to talk to me about your mother.”