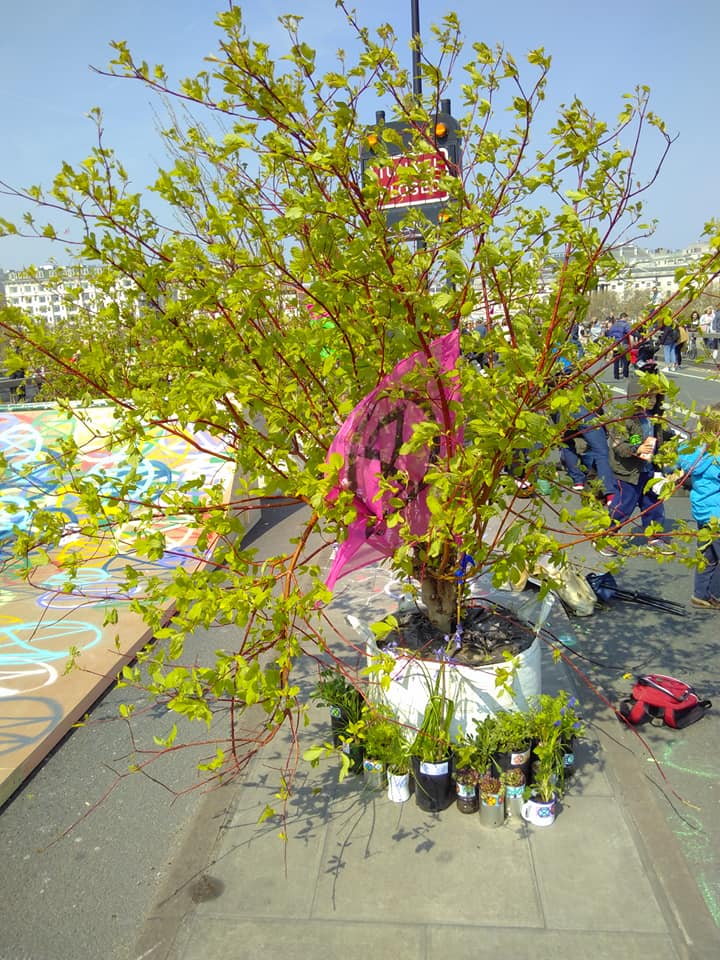 Beyond the lorry and its emerging stage, the trees in their central avenue had to be sandbagged against the wind. While Leo helped with the lifting, Manda walked towards the north end, watching the potted plants and chalked artwork erase the blacks and greys. New tents billowed; flags flapped. Banners hung from metal and branches. Below, the Thames flowed on as if nothing had changed. The skyline remained as the tourists expected it. But Waterloo Bridge was a garden growing fast.

In spite of the ROAD CLOSED sign and police lethargy, both ends had to be securely held. Behind the banner a big drum beat a rhythm through a chant. “What do we want?” someone called. “Climate justice!” Manda joined in. “When do we want it?” “Now!” she yelled. And again, and again.

After some dancing, Manda offered to relieve one of the guys holding the banner. He thanked her and asked whether there was a skateboard park.

“Not yet but give them half an hour! It’s like a top hat full of magic spilling out. We’ll have rabbits next.”

Manda wished she’d been more involved in the strategic planning that left her awestruck. But there would be veg to chop any time now and this brand new community would need feeding. She couldn’t tell whether the police officers close enough to scrutinise were thrown by what had happened on their watch, unfazed or entertained, but they only stood, observing and unthreatening. Unless they had their own even more brilliantly strategic plan…

Already cameras were busy but she hadn’t spotted Nick Gorski – just hundreds of guys his age, people who might have met Rob, young women who might have been glad to be Gem, all of them here for their future. And what had she done, really, all these years, with the truth? Not enough. Not nearly enough.

Gem could smell hot food and realised she hadn’t needed lunch at home before she set off. Crossing the bridge from the north side she smiled at the flowers, the messages, the faces that met hers. Coming to a kind of printing table with wood-cut letters, she chose the strip of cloth that read Conscientious Protector and picked up some safety pins with it.

“Not so easy to do your own arm,” said someone around her age who apparently didn’t need a coat, just a stripy jumper that might have shrunk in the wash and a denim mini skirt. “Let me.” She introduced herself as Lois and admired Skye, who was watchful but quiet.

She looked up at the lorry stage where a cool guy old enough to be her father was playing guitar rather well.

“You know there’s a family area behind it, right?” Lois checked. “Past Inductions, before Wellbeing.”

“Great. All this since ten?”

“Not long after. And you know about the church, for toilets, and time out. Restores my faith in religion – or should that be people?” Lois looked around. “Feels like home.”

“You’re from the South West?”

Lois explained that most of the people who’d taken the bridge were in affinity groups from Cornwall, Devon and Somerset. “Totnes is punching above its weight. Stroud too. I just met a permaculture guy with the carbon footprint of a mouse. Don’t you love it here already?”

Gem nodded. Lois swayed her hips to the guitar, which was funkier now. Then she said, “Did you write a Letter to Earth? I’m reading mine later – although I might be crying by the end. See you, Gem. See you, Skye.”

Skye waved shyly. Lois left for a series of embraces. Gem wished she’d written that letter, joined an affinity group – rather than feeling like a part-timer, constrained too.

“Don’t beat yourself up,” Nick would tell her. He insisted she was a great mother, but when she’d tried to tell him it would have been better for Skye if she hadn’t been born into this climate emergency, he’d asked her not to say that, not to even believe it. Of course she could argue that it was rationally, objectively true – as well as impossible to think at all when Skye raised her arms in love and trust because they belonged around her. As she was doing now.

Gem unstrapped her, carried her with one arm and began, rather unsteadily, to park the buggy with her free hand, beside a wheelbarrow full of potted herbs.

Someone reached for the handles and did the rest for her. In wind-tugged, harem pants and a knitted coat of many colours, she might have looked unconventional somewhere else – including Waterloo Bridge on any other morning. Her hair was tied with wool in a wide, heavy kind of pony tail.

“Manda. I wondered if you’d be here.” Skye filling her arms made the question of a hug null and void. But it meant the gap between them felt tangible – until Manda leaned in with a kiss for her left cheek, then the right.

Gem smiled. “This is Skye,” she said. She’d rehearsed this moment but still had no script.

“Hello, Skye, gorgeous girl! What do you think of this wonderland?”

Gem realised that since they had only spoken at the funeral, she had never seen Manda look or sound happy. And maybe this was a kind of wake for everything that was dying too. Skye was watching Manda’s painted beads.

“Want to touch them, Skye?” She held them out for Skye to reach and feel. “They’re made of recycled paper,” she told Gem.

“So are you, sweetheart.”

Surprised by emotion, Manda looked from Gem to the child and wondered how to ask whether she was her grandma. “Gem…” she began.

“I don’t know whether she’s Rob’s,” Gem told her, too quietly, as the music ended and the seated audience in front of the lorry clapped and cheered enthusiastically.

“Sorry? I missed that.” Manda pressed because she had to know, didn’t she? Although suddenly she wasn’t certain she needed to…

Gem raised her voice a little. “I don’t know who the father is. It could be Rob; I wanted that from the start. But there was someone else, someone kind who comforted me, soon after… So I don’t know for sure. I’m sorry.”

Manda nodded. “I see. But if you want her to be Rob’s, and I do too…” Her voice broke without warning. “Well, if you’re willing to let me get to know her a little, babysit even, if you like… I’d love to. Just as often or occasionally as you like. The offer’s there but don’t see it as any kind of pressure or claim.” Manda was conscious that here, now and unexpectedly, she could be her best self. It was liberating. “It’s wonderful to see you here,” she added, her voice thickening. “Family anyway, all of us, all over the world.”

“Thank you, Manda.” Gem was moved. It made words inadequate. “Thank you. That’s really… so kind.”

“I’ll be here for as long as it holds – unless I’m in a police cell of course. And you’ve been listening to my partner, Leo.” Manda had sensed that he was close and turned to find him with his guitar on his back, smiling.

Gem smiled too. “I enjoyed your set,” she said, because she had, although now it seemed a long way back in the past.

“Ah,” he said. “Lovely to meet you. And this?” He held out a hand to Skye but she hadn’t got the hang of high fives yet, which made her laugh most.

“Skye,” said Manda and Gem together.

“I think I’ll take her to the children’s area…”

Now Skye wanted to walk so Gem led her away by the hand, knowing they were watching. It was news she would have messaged Pru to share. As it was, the person she wanted to call and tell might not be the best audience for the story.

Libby hadn’t realised that Trey would be at a meeting until the afternoon. Wearing a new dress she expected him to notice, she hoped the climate protestors wouldn’t delay his arrival even longer. Since coffee time people in the office had been moaning about the disruption, calling it counterproductive and blaming hippies but she’d kept her head down. As her computer screen showed almost two thirty, she heard his voice in reception, crossed her legs and sat up straighter at the screen. Her lipstick still felt fresh.

Making sure she didn’t turn her head as he spoke to a couple of the others, she waited until he was almost behind her before she looked up and smiled. She was sure he danced at weekends; the energy and grace were in his walk, his body.

“No, all good,” she told him. “I hope the protest didn’t cause you any. Problems, I mean.”

“Extinction Rebellion? They’ve brought London to its knees according to the press. The tubes are fine, though. I’m guessing your mother…”

Libby felt the kind of flush she’d grown out of a decade ago. Who told him that? It wouldn’t surprise her if the video that went viral followed her everywhere and forever. She winced. “Probably, yes. Well, definitely in fact.”

“Good on her.” Trey smiled, checked his phone and looked back up at Libby, running a hand through his fair curls. “Really. I mean someone’s got to bring government to its senses, right? All power to them. Screw the inconvenience; climate breakdown be a lot more disruptive if the world doesn’t act.”

She stared and made an assenting sort of noise. Her smile felt unconvincing.

“You should be proud of your mum. I would be.”

She made a faint, wordless noise Trey didn’t hear because he was answering a call on his mobile as he headed for his office.