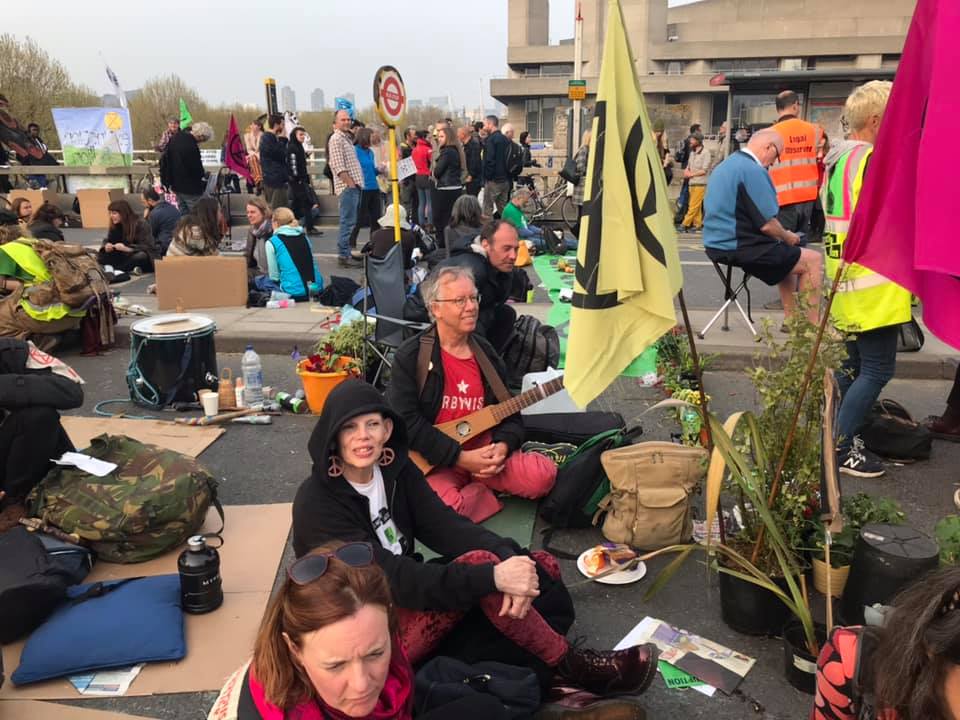 Gem’s hand felt the heat of Skye’s forehead. Everything was redder than it should be: her cheeks, her eyes and nose. Whimpering, she put her arms around Gem’s neck.

“We’ll have a quiet day here, sweetheart,” Gem told her.

She could try to stop Nick coming but she didn’t want to. Maybe there’d be a livestream they could watch together. She was reading Skye a story when she heard him at the door and for a moment Skye looked too excited to be ill.

He kissed Gem’s cheeks and, ignoring a health warning, leaned down to Skye’s too. Gem thought maybe, just so he knew, she should talk to him again, properly – about Birth Strike. In case he was hanging in there for something she couldn’t give.

They shared what they knew between them: Piccadilly Circus lost, Marble Arch permitted for now, police officers caught on film dancing with rebels on the bridge. Arrests clogging up the system.

“She needs her mother.” Not a might-be father. It wasn’t fair on him. “You go, get some footage, and come back and tell me everything.”

He hesitated, and made sure the hedgehog got a laugh before he left. Then he kissed her goodbye and Gem followed him into the hall.

“There’s something I want to tell you,” he said. “You know I love you. You must know.”

“And Skye, whatever. Mine or Rob’s, why would it make any difference? We could be a family.”

Gem tried to smile but it didn’t feel whole. “I shouldn’t have had a child. No one should, not now. It isn’t fair to bring kids into a world that’s dying.” Her voice faltered, fracturing.

He took her hand. “You don’t want any more…”

“It’s not about wanting.”

He waited, but she had no more words.

“Look, never say never. I love you. I know you still love Rob but hey, so do I. And we’re doing this the wrong way round.” It was Gem’s turn, puzzled, to wait. He still held her hand and she didn’t like to tug. “Talking about having kids together when we haven’t even kissed.”

They must have done that too, after the funeral, but it seemed neither of them remembered. Now Nick kissed her mouth. Not a sex kiss, but warm.

She smiled as he hurried to his van, because she didn’t know anyone with legs as long as his.

Today the afternoon sun felt seriously hot. Manda might have to remove her thermal vest in the crypt. With police numbers and raids on the increase, she intended to leave the cooking to someone who couldn’t put their job at risk, and sit on the heart line as an arrestable. But first she watered some of the plants gathered in a garden behind the banner, checking the soil with a finger in case another rebel had thought of it first. Most of them were thriving; a few needed T and C. She rubbed the herbs between her fingers and inhaled: mint, rosemary. There were forget-me-nots, begonias… So much colour and life she could cry. And she needed sunblock as much as sleep.

Putting down the watering can, she squinted ahead, feeling a stirring around her. Police vans at the end of the bridge. “Could we have any arrestables to the heart line now!” she heard over the loudspeaker. “And legal observers please.”

Manda made for the front row, where the banner was laid down so that everyone holding it could sit behind. Someone made way for her, a boy-faced young gardener who’d been drumming during the arrests the night before. Shuffling, she made herself as comfortable as her bones allowed.

On her right, a woman with more muscles as well as flesh pushed a kind of kneeler towards her as cushion, saying someone had left it behind when they came for her. Manda thanked her, wondering whether she looked old as well as scrawny. A young tourist had given up his seat on the tube for her last week…

She’d lost Leo again, hadn’t seen him since he arrived for late breakfast, and didn’t really expect to spot him now as she turned to look through the crowd. He was probably playing or waiting to go on stage. A number of police officers were advancing in a kind of formation that must be meant to intimidate but she couldn’t believe they’d signed up for this. Behind, someone from the Wellbeing team began a chant, the hushed, religious kind: “Peace, love respect”. The tune, such as it was, defeated Manda, but personally she knew she needed de-escalation. She liked to think her heart was healthy but this… now was the time and there’d never in human history been anything bigger. And she wasn’t scared, just overwhelmed by the truth and its demands.

The first arrestee of the run walked, and made a peace sign with her free hand. Manda looked back again, and to both sides, in case Leo had gone to the church for a pee and arrived back in time. Because at breakfast they had agreed to sit together on the heart line this afternoon – although admittedly the idea was hers. “We could glue our hands together,” she’d said, “so if they take one, they’ll have to take both.” Leo hadn’t taken that seriously but he’d said he didn’t want her getting arrested without him.

The young gardener whose name she’d lost gave her a smile as if he knew she was anxious now. She smiled back, grateful. This was the kind of guy Libby needed, not some slick suit with no ideas, never mind ideals.

She could tell that on the other side of the bridge nearest the National Theatre, more arrests were happening. But with film crews following the departures it was hard, from the ground, to see who’d been taken. Joining in with the chant for Climate Justice Now, she realised she needed water and Leo had their aluminium bottle in his backpack. She asked the gardener, who was just unscrewing the lid on his own when a policeman targeted him. He passed her the bottle and she drank hastily, watching. As he zoned out his final warning with what seemed to be prayer or meditation, she offered the water back but he meant her to keep it, because he wasn’t going to need it for a while. It took four officers to carry him away.

“WE LOVE YOU!!” shouted Manda, meaning it.

Now Claire, the sporty woman on her right, was next. Manda sang as loudly as she could beside her. Soon Claire had been lifted too, carried rather awkwardly so that they had to put her down and try again. If only she could contact Leo, he could fill that space. On her left, a girl in sunglasses had already stepped in where the gardener’s water bottle stood glinting. The Wellbeing team passed sun cream round, but the police hadn’t finished yet. Manda pulled out her phone, remembering the legal training advice that it was best not to carry one when arrested because the cops could download the contents. And she didn’t want them looking through her gallery at Rob, Rob, Rob… But if the cops were apple picking, she was the one they left on the tree. Too many bruises, maybe.

Where are you? No response. If he was on the bridge he’d know where to find her, so what had happened? Had he been tempted into the Diane Arbus exhibition at the Hayward like he’d teased he might be? There was something casual but impulsive about him that made him hard to know completely and she didn’t know how it had happened, this feeling that overcame her sometimes, because she should know better.

Still her screen was blank. But she wasn’t going anywhere. Having removed a guy in a CHOOSE LOVE T-shirt two places away from Manda, the police seemed to have abandoned her end of the line.

Nick Gorksi, plus camera. She was glad to see him. He said he was taking photos, portraits really, probably black and white, and would she mind?

“Not right now, Nick.” She produced her phone and scrolled… “You haven’t seen my partner, have you?” She showed him an image from Monday, of Leo on the stage with guitar – and enlarged it as much as she could.

Nick’s mouth opened. “He was over there.” He pointed towards the theatre side. “He was arrested.”

Manda’s boyfriend’s been taken. She’s a mess. She ran down to the vans looking for him and he just smiled and blew her a kiss. I filmed it. Maybe I shouldn’t have, it felt like intruding. x

Gem nearly replied, She must be in love. Instead she wrote, Manda holds on tight. X

I think she’s frustrated too, that it wasn’t her. She’s been trying hard. They say people are being taken as far as Luton and Brighton because cells are full. She’s gone to the NT bar to call the XR action line for news of him. X

It must be tough. X  And Manda wasn’t, not really.

He said these things. How did she know he meant them, or whether she wanted him to?

Her turn will come. The Met are going to step up the pressure now.

He had a way of talking as if he knew the things he only supposed.

Did you mean what you said about Birth Strike? Xxxx

I think I did.

He didn’t answer that. Gem pictured his face as he read it, and felt sad. But there was a difference between accepting the truth, with his intellect, as the experts told it, and knowing deep inside where he was wholly and purely himself – in what people always called the heart: the part of him that wanted to be a full-time lover and father and made no room for melting ice, forest fires and cities under water.

Skye was asleep. Gem pushed back the hair from her forehead as she slept. She felt cooler now. Maybe at the weekend she could take her to Marble Arch, if that was still safe. But she’d rather be on the bridge; she missed it.

She didn’t suppose Manda would ever want to leave.