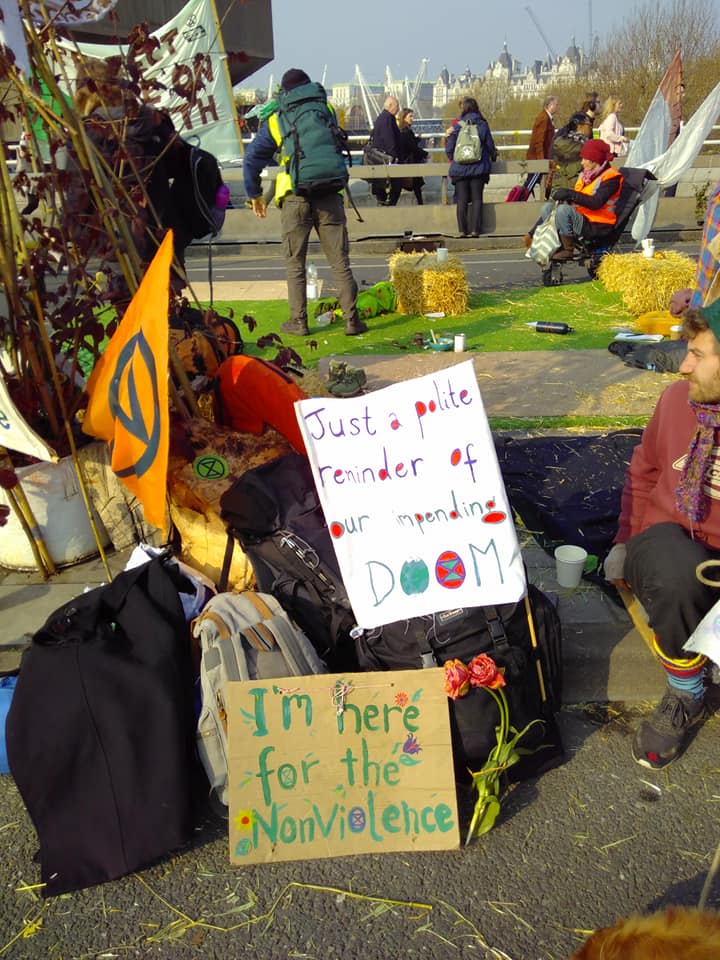 Manda supposed she’d slept a little. Searing, the light on the ceiling reminded her of movie interrogations. Her stomach felt achingly empty and her head throbbed but she told herself they couldn’t keep her much longer now. The confinement was tough but the solitary part harder. It made nights in the crypt seem warmly appealing in their solidarity.

Was it morning yet? Her mouth was so dry it had new adhesive qualities. She could do with a coffee. The sound of the cell door opening made her sit up, run her fingers through her hair and wipe dust from her eyes.

Holding the door open stood a young man in jeans who might have fitted in fine on the bridge if he swapped his shirt and pullover for a block-printed T-shirt. She wondered whether it was true about one female cop going home from her shift, changing and joining the rebels – presumably at Marble Arch. She hoped so.

The plain clothes officer looked a lot fresher than her solicitor had in the wee small hours. It was obvious everything was stretched to capacity, beyond.

“Great,” she mumbled. She could do with a wee but not now, not here.

She followed him to the desk where she’d been processed on arrival and stood silently, less than focused, as they told her that her release was subject to further investigation and that if she didn’t hear anything in six months then well, she’d hear nothing. That there might or might not be a letter.

“If I were you I’d forget about it,” said the sergeant.

There was more electronic signing to do as she reclaimed her backpack and was invited to check everything was intact. She wasn’t sure about that. Something in her felt changed and she wasn’t sure what.

“There are people waiting outside for you,” the officer said.

XR were good at that. “What time is it?”

Four fifteen! Leo would be home in bed and so he should be, with that back of his. Manda felt an end-of-term surge as she was escorted to the door – not the back where she’d been admitted but the front, where in a kind of lobby people were waiting. As one they turned and stood.

Leo held back behind Libby.

“Darling!” Manda didn’t mean to blub but self-control was impossible. She embraced Libby, felt how cold she was, under-dressed in summer office clothes. “You didn’t need…”

“Don’t start that now,” said Leo over her shoulder as he held her. He sounded so tired.

Libby pretended she hadn’t heard that. Her mother looked pale, a mess. With her eyes only slightly less wild than her hair, she could have auditioned for one of Macbeth’s witches. “All right?” Libby asked her.

“Hungry and a bit sleepless but perfectly fine.”

Libby was never convinced by her mother’s breeziness. As a cover it was thin.

“There’ll be food on the bridge,” said Leo. “But I brought you a banana.”

Manda grinned and hugged him again. When he broke its neck, peeling it back for her as if she was Skye, she took a greedy bite. Someone from the official arrestee support team, a guy called Harry with all his hair gathered in his beard, asked if she was treated well.

She nodded as she ate. “But what about the others? The lovely young Stu? He’d only just sat down when they took him, poor baby.”

Libby thought she sounded drunk as well as old.

“All out last night. You’re the last one released from here,” Harry told her. “For a while, anyway.”

“They know a dangerous criminal when they see one,” joked Leo as the four of them stepped outside into darkness.

Manda would have loved to give Stu a long, emotional hug. She hoped his mother would surprise him with one.

“I wasn’t charged,” she said. “I made a written statement.”

The pavement wasn’t wide enough for Manda to walk arm in arm between them. In any case Libby had stepped ahead, following Harry. Calling back, he assured them all the buses would still be running even though the tubes wouldn’t come alive for a while.

Manda wanted to ask Libby, “So tell me what you think,” but she’d need to feel stronger before she could risk the answer.

Libby had questions that could wait until it was just the two of them, and life was normal again. She supposed Trey would be fast asleep but he’d told her to message so she did: She’s out. They kept her most of the night. It would have been nice if he’d stayed. But no need for him to get embroiled in this kind of drama after one date and a couple of nice-boy kisses.

Watching her daughter walk briskly but huddling against the cold, Manda thought she should say sorry for the timing. Her arm tight in Leo’s, she whispered, “What’s she even doing here?”

“Long story,” he said. “It can wait till morning.”

“I hope it’s a good one.” She stopped, gripped, and raised her voice: “I know Oxford Circus is over but tell me they haven’t cleared the bridge?”

“We held the bridge,” Harry called.

Manda waved her free arm, and danced in the street.

“Food before jiggling,” Leo told her.

“They should have kept her in for psychiatric assessment,” Libby muttered, just as Harry shouted that the bus was coming and if they crossed the road fast they’d catch it.

Manda wasn’t sure how much running she could manage, but it turned out to be enough.