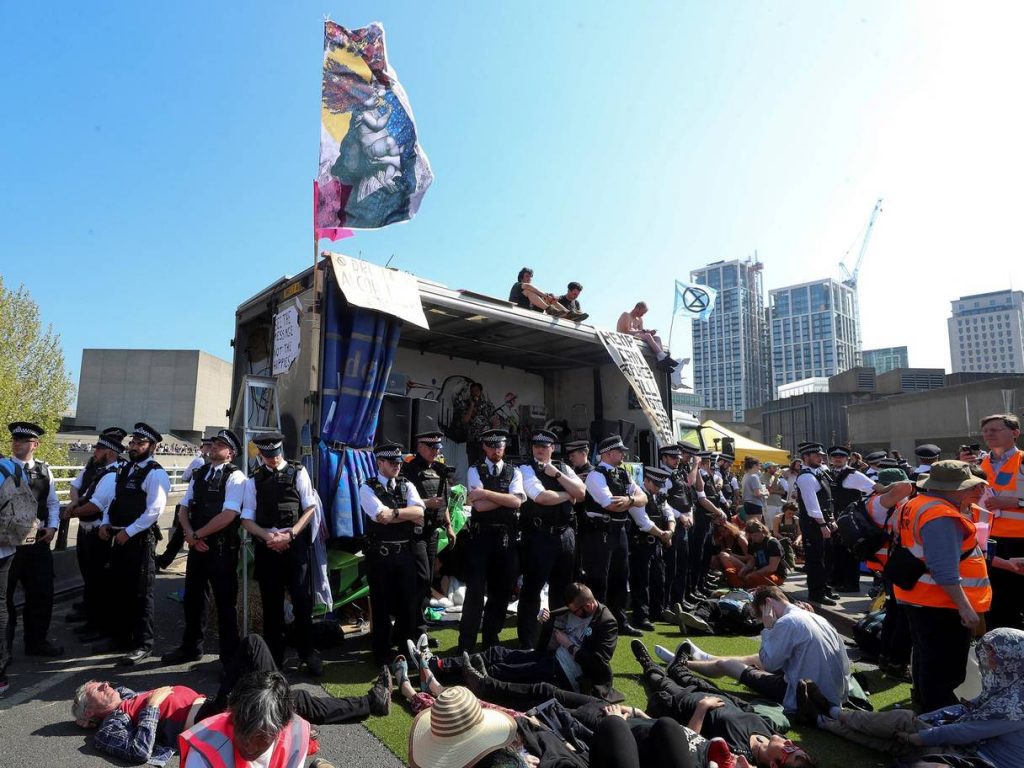 As soon as she could after Skye woke her, Gem checked Twitter. She didn’t want to see the photographs from Oxford Circus of the pink boat surrounded. Of officers daring protestors to break their thick black chain. But at Waterloo Bridge the resistance continued after a day of more arrests.

She smiled at Skye in her high chair. Was it safe for her at the bridge? Wouldn’t the strategy mean taking that too?

Nick appeared, rosy from the shower, drying his hair with a towel. He kissed her cheek and Skye’s forehead.

“Tell the Truth has gone,” she told him, “and the police have finally found a strategy to deal with protestors according to the Telegraph.”

He knew, and he’d seen a photo of Manda being arrested. Gem wasn’t sure she wanted him to find it for her on his phone.

“It’ll be fine, don’t worry. There’ll be families picnicking. Easter Saturday! It’ll be the biggest crowd yet. We can keep out of trouble even if Manda can’t.”

He considered. “Then you go. We’ll chill in some shade at the park. We can meet up later. It’s going to be a scorcher.”

Gem thanked him, sat him down and rubbed his hair dry.

Saying goodbye to Libby on the first tube of the day, Manda ignored her advice to stay away, rest, keep out of trouble. A few quick cheek kisses and she’d gone. Manda waved but she once out of the carriage she didn’t look back.

“Before you head back.”

“I know. You’re hard-core. I’m taking a break. I didn’t sleep either…”

She stroked his hair. “I know.”

“And I could say you’ve done enough but I’d be wasting my breath.”

Manda might do that right now, against his shoulder.

Gem hadn’t expected the heat to rage like this. It seemed to subdue everything yet the air felt tight, wary. Above, the sky was vivid, the blue unbroken. Was that a bird of prey oblivious up there, its arc fast and cool? The crowd picnicking behind the stage included families; maybe she’d been over-cautious. Checking her phone she found a message that Nick had taken Skye home out of the sun. If the temperature rose any higher Gem might have to join them.  Time to head for the church to refill her water bottle and breathe in some old-stone air while she was there.

Bee was always in a good mood when she could top up her tan; she wasn’t interested in the shade Libby suggested. Feeling pale and still less than wide-awake, Libby let her talk about the guy she’d dumped for being too serious, and held back her own storylines.

“He wanted me to meet his parents. I know what that means and I’m not ready.”

Libby nodded sympathetically. She was trying not to feel disappointed about Trey not coming with her to the police station but she supposed that would have been a pretty heavy way to introduce her mother after one date. Still, he’d cried off and even though she knew she shouldn’t expect too much, it was unsettling. Especially as all she’d heard from him since was Hope your mum is home OK. Enjoy the Easter break. X As if she was just another colleague and he was relishing the holiday when it meant she wouldn’t see him until Tuesday.

Bee paused to drink, swearing at a fly that seemed to have the same idea.

“So tell me about Trey. It’s funny cos I know a Trey Marshall who’s American and in your field. Blonde curls. My friend Amy was at uni with him; they dated for years but cheated on her. He’s got a live-in girlfriend and a two-year-old boy.”

Libby narrowed her eyes behind her sunglasses. “Is that meant to be a joke?”

Bee put down her drink. “Can there be two of them? Show me a picture.”

Libby had been intending to show her the selfie she’d taken as they arrived at the bridge, before they found out where her mother was. She shook her head.

“You had to know. I mean, a girlfriend’s one thing but a baby’s something else.”

Libby drained her glass. “I’m going now. And I’m not sure I’m forgiving you.”

“Me? What about Trey Marshall?”

“Him either.” Libby stood. A group of guys at the next table laughed so loudly it almost hurt.

It was what her mother said about the climate. Libby didn’t want to leave; she’d rather drink herself into oblivion. But she’d need to look for jobs. Or make sure he did.

“It might be years before I thank you.” Libby sat down. Sometimes anger was the only way through.

“Shall I get us a bottle of Prosecco? Then you can tell me about Mad Manda and the rebels.”

Libby nodded. As Bee made for the bar she worded a message: You too. Hope your little boy enjoys his Easter eggs!

It was years since Manda had bought her one of those.

Gem stayed longer in the church than she’d intended but the space had never felt so airy and comforting. She was sitting facing the altar and lost to the peace when something made her turn. Noise outside? Stepping out onto the blazing street she saw more police than she’d seen in her life, a fleet of vans, and a couple of officers with tape, the kind they used to cordon off the site of a crime. And she supposed this was a crime…

Approaching the bridge, she understood. The lorry was surrounded. The police were targeting the stage – circling it, thick and firm without a chink to break through. At their feet people were sitting, as if to guard something that was already lost, and all around her bodies were being lifted away. But what about the singer, and the others locked on underneath? Maybe they needed water.

Gem made her way around to the front of the lorry where a flag still waved and the sound system pumped out Waterloo. Although no one was going to surrender! Rebels were presenting themselves for arrest on that side too, one of them lying down completely covered by a black umbrella, others sitting patiently absorbing the heat while the police facing them took no interest. Wasn’t this kettling? Trying to see through the black human barrier they made, Gem realised she could go no further. As the music ended she heard a shout.

Rising from the ground next to the umbrella, Manda looked exhausted. With her eyes on Gem, she placed a hand on her heart. A hand that might be shaking.

Gem tried to make eye contact with the officer in her way as she pressed forward. “Please let me in. That’s my mother in law.”

He shook his head. “No one’s allowed in.”

Gem stepped back, her heart tight. They were going to clear the bridge – and the stage was its heartbeat. It made such perfect sense; why hadn’t they tried before?

The heat shouldn’t be this savage. She wandered slowly down the pavement. Behind the garden and the banners the arrests continued, and all she could do was witness and honour everyone taken, holding each of them in the light, face after face, in their silent resistance. Thankful, because they did it for Skye. She wanted to sit down with them, and trust – or not care – because after all she might not even be charged. But no, she could only watch, until the blonde singer from under the lorry was carried away to a surging swell: a kind of family pride, a deep respect.

“WE LOVE YOU!” Gem cried, her stillness stirred.

Picturing Manda, she wished her strength, peace, hope. She turned away and stepped up her pace to be gone, willing the breeze to come off the water and find her. She wanted to be with Skye now, and forget this. But never forget.