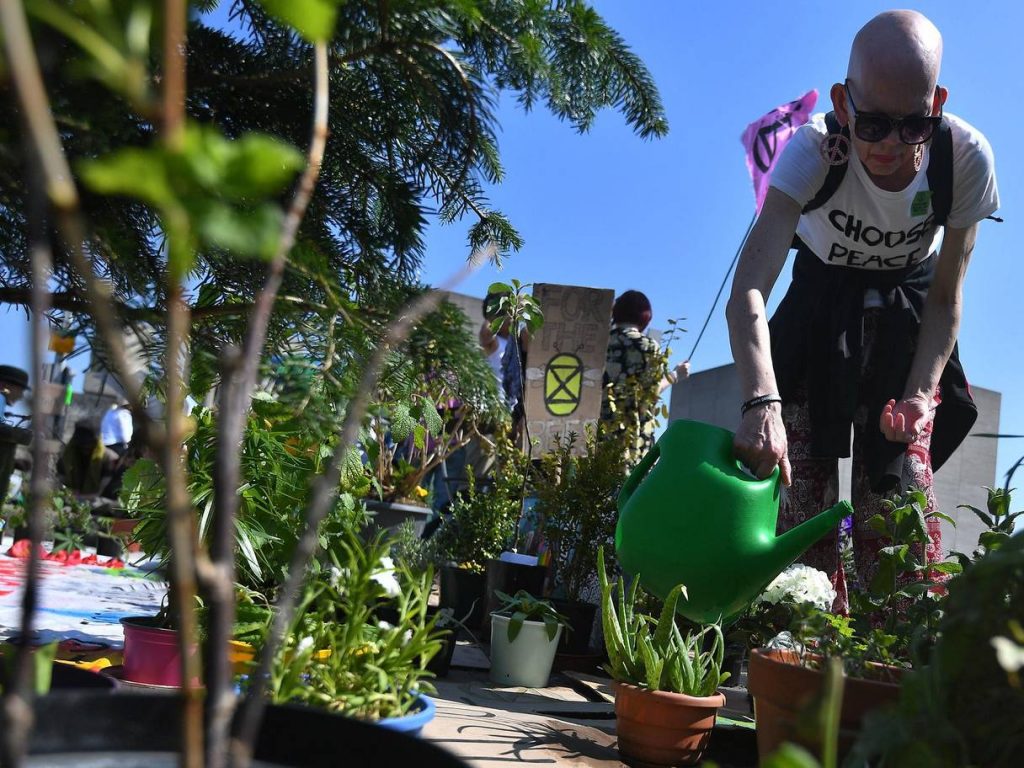 Manda looked out of the window.

“I knew she’d be late,” she muttered.

“Chill,” Leo told her. “Nathan didn’t even give me a time. He could cancel. He could even forget again.”

“I hope not. You guys have a lovely day.”

It galled her really, that he’d been stood up while she was roasting in front of the lorry. That he hadn’t come and joined her. But Nathan was a sweetheart; they both were. As Leo had already remarked, she was grumpy, and she couldn’t say, “So would you be, after a week without sleep,” because he never slept well with that back of his, and he wasn’t.

She looked back at the clock on the wall, the goofy wooden one Nathan had made him.

“You can’t really be late for your mother,” he pointed out.

She sighed. “I know. That’s what makes it pointless. She wouldn’t know the difference if I didn’t go. Or went next Sunday.” He was right. Time meant nothing. After all, in her world Rob was still alive.

She supposed in the home it would be some kind of special family day and thanks to Libby she’d have a family of a kind to show for it. And Leo was right about the bridge too, because it was just a matter of time and maybe being there to see the end was more grieving than she could handle.

“Nowhere to park except Tesco’s. Sorry.”

Leo held her when she placed her lips quickly, lightly, on his. She felt his tenderness but he was free with that. Tenderness for Nathan. For the neighbours he liked to help, especially the women. Everyone on the bridge. Even the wife who’d left her hat behind in the wardrobe, never expecting it to be confiscated by police and listed on a custody inventory. Nathan was a tender guy – except when he was absent, the lone male following his own star and not looking back.

She nodded, withdrew and hurried down the stairs.

The sun shone in through the Meeting House windows. On Gem’s skin it felt not fierce but welcome, a gift. It made her smile inside. On the table in the centre of the creamy white room a small glass vase held three tulips, each one beginning to cup open, their red bleeding to warm yellow. Gem drew their outlines in her mind, felt the smoothness of their petals, and then recreated them with her eyes closed. Flowers only gave. No harm, no tooth and claw. Maybe ministry would come. Maybe she would talk about the tulips lying limp on the bridge, like the remnants of a wake. Was it God she waited for? She wasn’t sure it mattered.

Gem remembered a song, Back to Life. It would be different now, because she might not be Manda, giving everything till she had nothing left, but she’d been there. It was home. And so was Nick, now. She should let him in where only Rob had been. No harm, no tooth and claw. He only gave.

She picked up Advices and Queries from beside the tulips. Remember that Christianity is not a notion but a way. A pathway to walk. A way of being, inside where no one knew. A way to live out there in the world.

She stood. “Friends.” She paused. “On Waterloo Bridge I found a different way to live. It’s what we all have to find if we are to live at all. In love, in communion, in peace. Serving the truth as we serve each other. As we worship the protest there may be over but I believe the awakening has just begun.”

“Nice to have a proper chat,” said Libby sardonically when her mother woke in the car park of the nursing home. Which was unfair on a mad sleepless activist but the traffic had been worse than expected and she could have done with a bit of stress relief. Not that Manda had ever supplied that.

“I thought we could do that.”

Manda thought Libby should understand that she didn’t intend or foresee a nap and would have assumed that distress would keep her wired. She led the way along the familiar route up to her mother’s room, but at the lift her brain temporarily deleted the code, which provoked a swallowed sigh.

“Shit! I know this!” Manda wasn’t sure which of them was more impatient. But in the end she had to ask a member of staff, and try not to feel embarrassed under Libby’s gaze.

With Libby’s heels a step behind her on the corridor, it struck Manda that no one wished anyone Happy Easter except inside church walls. These days Hallowe’en was more visible and better for the economy. No inflatable bunnies swaying above doors or plastic chicks lighting up in shop windows, just chocolate by the ton and most of it packaged with abandon. She remembered Libby complaining when she bought her an egg at about thirteen, and then when she didn’t the following year.

“Will she know who I am?” Libby asked, suddenly imagining the grandmother she hadn’t seen for six months or more, and feeling selfish.

Manda shrugged. Libby’s offer had been generous but perhaps she shouldn’t have accepted it. “She might.”

“But she remembers Rob, right?”

Libby supposed everyone did – even, thanks to her mother, the Twitter followers who’d met him posthumously in a tribute she’d hated her for.

“Manda,” said a member of staff approaching with a smile. Blanking, Manda tried to read her name badge without her glasses. “You were on the news!”

“Your gran will be thrilled.”

Manda could see that Libby shared her doubts about that. Her mum’s door was ajar so she peered round it as she knocked.

Libby felt set up and bound to disappoint but she smiled at both of them. “Hello, Nana.”

Libby stooped to kiss her grandmother, hoping she would never smell so old. She could hardly picture her when she was solid and brisk and full of plans for outings and sticky treats. Now she was… flimsy. Drained of everything that counted. Decaying. It was horrible and she’d rather die in a car crash at sixty.

“Mum, she has not!” interjected Manda. “Did you have a nice dinner today? Roast potatoes?”

“You should eat meat, Manda,” Evelyn told her. “You’re all skin and bone. You promised to get that hair cut nicely too.”

“I’m vegan for the animals and the planet, Mum, and I didn’t promise any such thing. You know what a rebel I am.”

Smiling because her mother had always called her that, Manda moved magazines so Libby could sit down but she chose to look out onto the garden instead. And Manda couldn’t blame her. She realised she really wanted to tell Evelyn about the bridge and the police cell, and perhaps she could, because any anxiety it caused would be short-lived. But none of it would connect with the mother she used to know, who only ever approved of James, not her. She hadn’t dared bring Leo along, more than forty years after she rejected him for reasons she didn’t admit were racist, snobbish, and generally reactionary – in case the unsuitable boyfriend clung on in her brain cells while poor Libby was part of the clear-out.

Libby picked up a trash newspaper lying on her grandmother’s tray and held it for Manda to see, with its front page about mass arrests and a picture of Emma Thompson at Oxford Circus.

Libby’s eyes rounded. “Just because you love her in Sense and Sensibility! She flew in from the States! Hypocrite.”

“Who flew where?” asked Eleanor. “I’d like to go to Africa and see the elephants when they let me out.”

“Oh, she doesn’t believe in anything that’s fun,” said Eleanor. “No meat, no elephants, no cigars.”

Libby looked at Manda and Manda looked back. They laughed together.

“No cigars!” echoed Manda. Libby’s laugh was ending but hers was long and slightly out of control.

“You never smoked did you, Nana?”

“No but if I fancied starting it wouldn’t be up to her.”

Libby nodded emphatically. “I feel the same, Nana. Shall I see if I can get us all some tea and cake?”

Over coffee the Quakers wanted to know all about Waterloo Bridge and Gem didn’t know where to start, but she tried. They were glad she hadn’t been arrested but some of them seemed to understand when she said she wasn’t, really.  The youngest attender apart from her, a motherly Buddhist called Sylvie, said she was going to Marble Arch tomorrow.

“I don’t know how long the police will leave it alone,” Gem told her. Looking through the open door, she was happily surprised to glimpse Nick with the buggy. But what was he holding in the air? Something he wanted her to see? His phone?

Hurrying out of the building, she saw Skye was asleep in her sunhat, shaded by the hood. But something was wrong. It was in Nick’s face, the way he stood, his shoulders down.

He handed her the phone, its volume low but loud enough. A livestream. The end of the bridge – to the sound of Amazing Grace, pure as a church choir. Arrests among flowers. And people holding on to each other, not letting go.

Nick reached for her hand with a squeeze. Gem had no idea why she felt so shocked, so emptied. As the film scanned the remaining rebels she looked for Manda but perhaps she’d been arrested again. Gem hoped so, because she’d choose that over not being there.

She handed back Nick’s phone. “It’s not over.”

FOR LIFE ends here. It’s possible that with some editing that time hasn’t allowed it will surface again as an e-book with the money going to Extinction Rebellion if that can be arranged, so use the contact box if you can help.