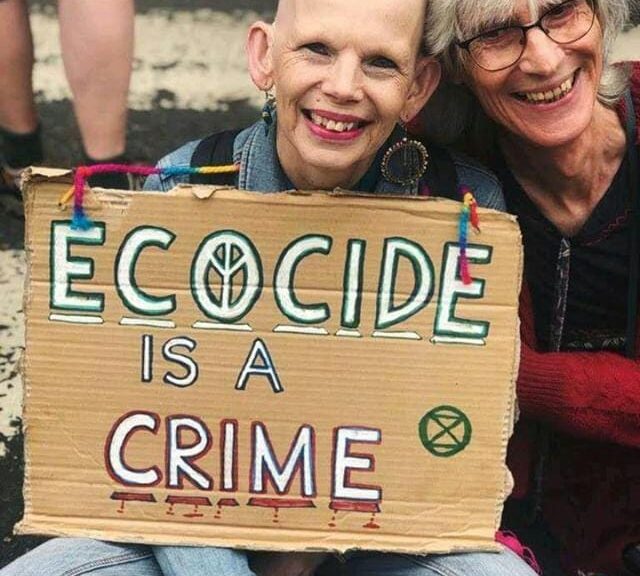 My plea hearing is this Friday at the City of London Magistrates’ Court. I will plead NOT GUILTY, my defence being conscience and prevention of a crime: ecocide. My primary evidence at my trial will be a Trust Fund document showing that I am an Earth Protector.

According to Wikipedia: Ecocide describes attempts to criminalize human activities that cause extensive damage to, destruction of or loss of ecosystems of a given territory; and which diminish the health and well-being of species within these ecosystems, including humans. It involves transgressions that violate the principles of environmental justice, ecological justice and species justice. When this occurs as a result of human behaviour, advocates argue that a crime has occurred. However, this has not yet been accepted as an international crime by the United Nations.

I first heard of Polly Higgins in 2011 when my brother Dave, the Carbon Coach, accompanied her to the awards ceremony of the People’s Book Prize and her book, Eradicating Ecocide, won. Polly was an international barrister who gave up a lucrative career to pursue an idea that would transform the world: Ecocide Law. An Ecocide Law would prevent investors from backing ecocidal practices, and insurers from underwriting them. Persons of superior responsibility – CEOs and government ministers – would become individually criminally responsible for ecocide which they recklessly cause or contribute to (e.g. by engaging in ecocidal practices, or issuing permits for them). It would change everything.

I met Polly when she came to deliver her inspiring talk at Ashlyns School in Berkhamsted, and was so inspired that I formed B.Wel – Berkhamsted Wants Ecocide Law. After a mere two people turned up to the first meeting I abandoned the group but remained inspired, and dedicated my novel CRAZY DAISE to Polly because my young activist character Daisy takes up the campaign. Polly emailed to tell me she had read it ‘in one go’ and loved it. Last year I officially became an Earth Protector.

On April 18th I was arrested holding a sign that read STOP ECOCIDE. I soon found myself in a police van where I was joined by a luminous young gardener from Stroud who had worked with Polly, and like me was thinking of her daily. Polly was much loved. She died peacefully three days later, on Easter Sunday – the day Waterloo Bridge fell after six beautiful days. She was only fifty and cancer took her fast, but she died knowing that thanks to Extinction Rebellion, Greta Thunberg and the School Strikes, a powerful, loving movement had begun, and that her vision was closer to realisation. Legal campaigner Jojo Mehta continues her work, and on July 15th outside the Law Courts spoke with passion from a boat called Polly Higgins, addressing a crowd of rebels gathered in the road. Later that week I climbed up to speak from the deck of Polly Higgins too, on a street corner opposite the Old Vic.

In my trial this coming winter I will draw the court’s attention to the ecocide around us and the need, as we run out of time to prevent catastrophe, for it to STOP. The government’s failure to make necessary and radical changes is morally, if not yet legally, a crime. It’s up to all of us who recognise the truth to take whatever peaceful action we can to prevent an unimaginable ecocide: the end of life on earth.