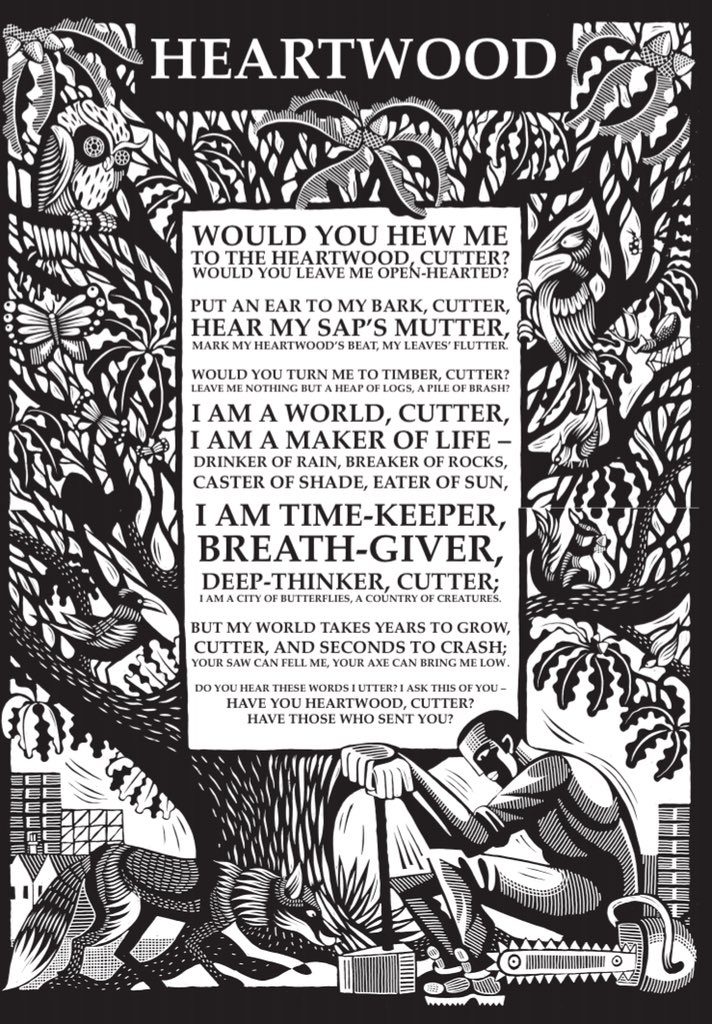 Sometimes love is something we learn. The Amazon is on fire and finally we understand what that means. The truth dawns, a truth we knew if we only stopped a moment to breathe, listen, look: that trees are the purest carbon capture technology, that they’ve been the lungs of the earth all along. That by planting more of them, trillions more, we could give ourselves an outside chance. Our dependence on trees is something we ingenious humans can be slow to grasp. Yet their beauty lies not only in their colours, textures, sounds, shape and strength, but in something deeper that seems to me now like tenderness. A tree has the power to transform the brutality of our concrete creation. Study after study confirms the nurturing impact on our wellbeing of walking through woods, or even a city park. Trees sustain and heal. Yet we ridicule tree huggers and Druids who revere the natural world over which, magnificently and beneficently, they preside. We destroy them to consume. We fell them for motorways. We overlook both the habitats they represent in all their magical complexity, and the extraordinarily intricate web of life we break at our own risk.

I’ve wised up but I’ve been no exception. I’ve lived an urban life, spending more time in art galleries, novels and cinemas than forests. But my father, whom I adored, had a deep, intuitive connection with the natural world. Writing about my childhood in the third person for my contribution to the triple autobiography, THE DREAM SPEAKS BACK, I didn’t know how Tardis-like the process would be. To a greater extent than I could have imagined, I became the little girl I used to be – and emerging into the present I was terribly moved, because my dad is gone and I am at that age where, setting aside climate breakdown just for a moment, loss is cumulative and tears are generally a blink away. I found myself supplementing memory (mine’s just too riddled with gaps where the details should be) to present a series of scenes that are essentially and emotionally truthful. Some are composites, such as a visit to Frinton, where my grandparents rented a beach hut and one scene represents many days, or rather how I felt about those days. Others are beacons in mist because of their emotional energy. Technicolour and multi-sensory, they retain their power over me. And the most vivid of them all seems to be the one I quote here. The one in which a tree has been cut down, my dad is weeping and I know, because he’s the wisest, most sensitive person in my world and the one I love most, he must know something profound that I’m too young to appreciate.

I feel it now.

The grinding noise was over now but the garden still smelt of wood. There was a fine dust of it around the sliced stump where the tree used to make shade. The girl thought of a painting she’d seen in The Tate Gallery, of the boy Jesus in the carpenter’s workshop. Dad would be proud that she remembered the artist’s name too: Sir John Everett Millais. But she wouldn’t mention it. She wouldn’t say anything in case the words were wrong. She just stood on the step down from the living room and watched.

Dad wasn’t browning in the deckchair, or mowing the lawn, or looking at the red geraniums gathering in a crowd alongside her. “What a colour!” he’d said last year. “Scarlet, carmine or vermillion?” “Scarlet,” she’d decided. That would have been a more beautiful name than Susan, and fitted a heroine better.

Now he sat on the grass, with splinters around him, and his knees up in front of his chest. His arms hugged his legs and his head was down, but not for long because a moment later he gazed up at the space the tree had filled, as if it was a scar that hurt. The girl knew he was crying even before a sound broke out. It wasn’t loud but deep and shaky. His body rattled softly, like the branches of the tree used to do when it was windy. Inside the girl the stiffness started, filling her. It was what happened to her breathing when it made no difference how much she loved him.

Mum was behind her now. She laid a hand on her shoulder and whispered, “Daddy’s heartbroken, darling. He blames himself. But we had no choice.”

The girl knew about the roots that had grown in secret, and webbed out towards the foundations. Dad had drawn the house on his board at the office so he called it a mistake building too close to the tree. But no one could have dreamed that it was creeping secretly towards them, day by day, week by week, while they ate and played and slept. She imagined the roots like arms with muscles and fists – breaking through the earth and shattering the concrete to lift up the house and tilt it like a ship on a wave. It wasn’t really frightening, because it was harder to believe in than the Ogre that used to give her bad dreams when she was small.

She was too grown-up for a swing now anyway.

Mum went slowly out across the grass and sat down beside Dad. He turned towards her and his face was wet, and creased out of shape. Mum reached her arm across his back and he leaned towards her. The girl couldn’t hear what she said to him but he kept on crying.

She wished he’d stop now. He preferred the garden to other people. It was his place to breathe after London and the train. It was his painting. But his heart had more cracks than it should and that scared her more than roots could ever do. Why couldn’t he forgive himself? The sun was bright and the geraniums didn’t care.

It was just a tree.