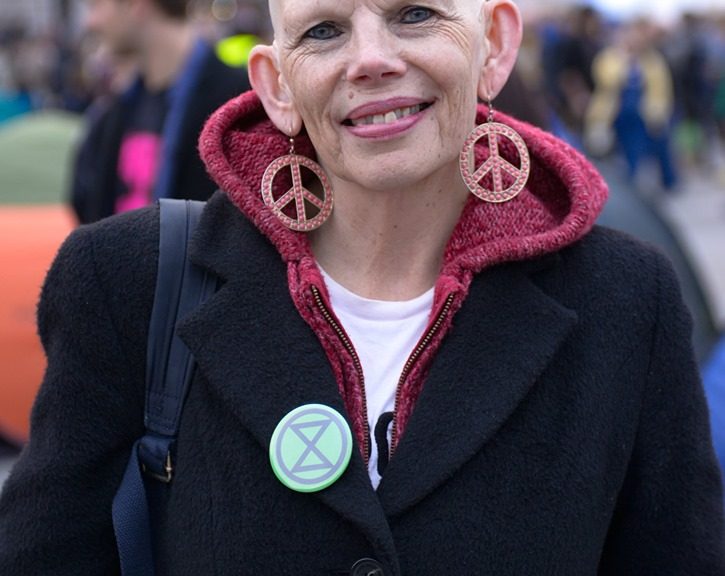 “Yes, I’m an author,” I say at the police station when they check me in and ask whether I work. Each time (three so far) the officer looks down at the next question and makes the same joke about me probably not needing help with reading or writing then. I’m not used to this yet and after 21 hours glued to a tower for Extinction Rebellion last weekend I was more muted than usual – so quiet, in fact, that students who know me as the lively author who came to their school would be shocked. During those school visits, explaining alopecia and the power of stories, I’ve always talked about identity, and it’s struck me that mine has shifted again. I went from teacher to author in 2008, having longed to write for ‘a living’ for fifty-two years, but now, in spite of my answer at the custody desk, I’m probably known more for my activism (climate, but peace too; my second arrest was at the Arms Fair) than for my 36 books – which, being full of my values, used to be my activism. Having achieved my author status I clung to it, writing hard, fulfilling school bookings to lead writing workshops, landing the odd festival and speaking to writers’ groups and book groups, often with my writer husband Leslie Tate. I have small publishers that can only offer a small readership but I let go of the frustrations and the ambition, and focused on delivering my best writing, on creating stories that felt important. I was never in it for the money, but the joy. I learned some years ago that when I wasn’t writing, I wasn’t happy. But that was before the climate crisis changed the way I look at the world, the way I live and who I am.

With parents who trod lightly on the earth and a brother who became the world’s first Carbon Coach, I always thought I knew and cared about ‘the environment’ but in fact as a teacher I was an overworking, conforming consumer. Even once I became an author and created a young eco activist in THE WATERHOUSE GIRL, I didn’t really get it. Knowing the truth at some level, and engaging with it emotionally so that it’s embedded in the core of that identity I was talking about, are two very different ways to be. The first allows us to live the ‘business as usual’ model while feeling and expressing guilt. The second transforms our feelings, priorities and therefore our actions and conversations. In my case, once I took climate breakdown into my soul – and that really is where it lies – I committed to writing more overtly about the crisis in my novels and to keyboard activism on social media. And I wanted that to be enough. If I’d had a readership of millions, I might have believed it was.

Last September I gained a new identity that’s proved even more moving and more joyous than I expected, after nine exciting months, it would be. I’m a grandma now as well as a mum and it’s emotionally overwhelming, an entirely new kind of love. Weeks later I joined Extinction Rebellion and wept for sheer hope – as well as desperate grief for all that’s already been lost or is under threat. I was used to my minority status as a Quaker, a Green, a non-flyer (since 06), a vegan. Now I found myself with people who wept too. I became a rebel. But even then I didn’t foresee how rebelling would change me. It’s made me braver, far braver than I would ever, as a naturally fearful wuss, have believed possible. It’s made me very, very sad – so sad that I don’t know where climate heartbreak ends and depression begins. It’s exhilaratingly intense and beautiful. And it’s left very little room for concerns like how many books I’m selling, or mailing out to schools. Since FOR LIFE, my novel that ends with the April rebellion – now an e-book for a donation to XR – I haven’t written anything but blogs and posts, and I miss it. But I haven’t had any author bookings either, all this term – which has always been my busiest. When I decided I was arrestable in April I knew schools might steer clear, and I was prepared to give up on that income and those sales. No one looking at my website can be in any doubt of my activism, although with a famous name I suspect I’d scare schools a lot less. I’m not the author who engages in activism any more, just an activist with a ton of stock to keep dusting on my bedroom shelves. The book launch for THE DREAM SPEAKS BACK is now also the day of my trial for my April ‘offence’ so if that runs late I may not even make it! But there’s no choice and that means no regrets. After all, there are rebels who have given up jobs to dedicate themselves to making change happen. And being a grandma is hugely empowering. In fact, although I could credit my mum with the physical courage I’ve found lately, it’s also courtesy of my favourite baby. You could say what I’ve shed, along with fantasies of eventual, possibly posthumous national acclaim, is the ridiculous vanity of believing that my writing mattered when set against a climate emergency that dwarfs or eradicates everything else.

I’d like to write again and perhaps I’ll find I must. But maybe next time I’m asked at a police station whether I work, I’ll swallow my pride and say, “Yes, at this. For climate justice.”

Like the sweatshirt I accepted from the Met, I don’t want unsold books going on landfill, so I’m offering any title (apart from the People not Borders charity books and the joint memoir, THE DREAM SPEAKS BACK) for £5. Message me.

These are just a few of my climate novels.

2 thoughts on “Rebellion: a change of identity”