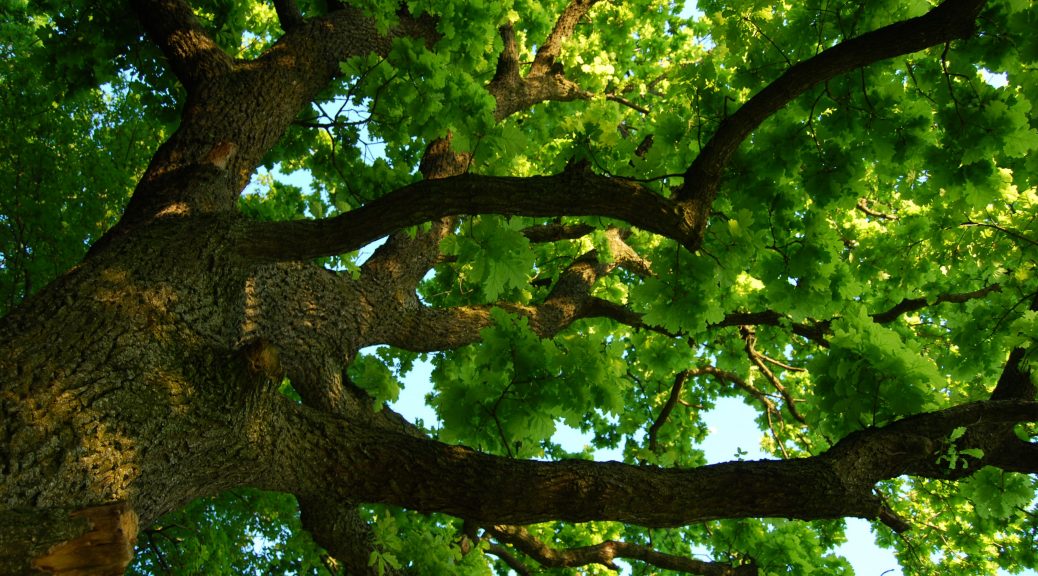 The boy’s grandma loved trees. When he was just a baby she carried him through the forest, and took him close to one trunk, then another. She placed her hand on the bark and felt it. Some trees were smooth. Others were soft with moss. Some were rough, ridged or bumpy. There were trunks as pale as frost but others were darker than coffee grains. Every time Grandma touched a tree, the baby boy touched it too. They both smiled. Every time, Grandma felt the tree’s heart beating silently. And every time, the baby boy reached out for the next tree.

As he grew, the boy began to love the big tree in Grandma’s garden. Taller than her house, it looked down over the hedge to the railway. Its branches were strong and wide and its trunk was thicker than a castle wall. Even when Grandma and the boy joined hands to hug the tree they couldn’t reach all the way around it.

Grandma put her ear to the bark and a finger to her lips. She seemed to be listening. So the boy put his ear against the bark too, much lower down towards the roots.

“What can you hear, Grandma?”

The boy listened hard but he told Grandma he could only hear the birds and the wind.

“Will it tell?” asked the boy.

“Maybe one day,” said Grandma, “if you keep listening.”

By the time he was nine the boy could climb Grandma’s tree and wave down at her from a branch above her head. He watched the trains speed past and tried to read their names. Grandma took photos of him, up the tree and beneath it. He raced himself around the tree and back, and made leaf prints in autumn. One Christmas he asked Grandma if they could decorate the special tree, but she thought it was beautiful enough already.

“Like you!” she said. “No one needs to hang a bauble round your neck to make you look gorgeous.”

In the summer he sat with Grandma in the shade of the tree and they read stories to each other, or made them up as they told them.

Even when it was too soggy outside to climb the tree, the boy always waved at it when he arrived at Grandma’s house, and if it was windy it waved back.

“Is the tree still growing?” he asked her one wet day. “Or has it stopped, like you?”

“Oh yes. It will live a lot longer than humans can.”

“Some trees can live a thousand years,” Grandma told him.

The boy was amazed. “How long will you live?”

“No one can answer that,” said Grandma.

“A hundred years!” said the boy, but Grandma only smiled, and said they should plant acorns next autumn, to help the Earth keep breathing.

By the time the boy was fourteen things had changed. Grandma was seventy-six and her hair was very white. She wasn’t as bendy as she used to be. But the boy had changed too. He was taller and stronger but quieter, and didn’t laugh as often. He was busy too, with sport and school work and friends, so he didn’t spend as much time at Grandma’s, but now and then he called round after school if he could, and she was happy to see him. Only he didn’t like having his photo taken any more, not even under the tree.

One afternoon, when he arrived for a surprise visit, she seemed sad.

“What’s wrong, Grandma?” he asked. He knew she still missed Grandad, who’d died before he was born.

She shook her head. “But it has to be cut down. The roots are too close to the house. The expert says it’s not safe. And I’d rather lose the house than the tree…”

“No, but no one can live without trees. We need them now, more than ever.”

She’d taught him that; she’d shown him all the life in it, from the squirrel eating its acorns to the caterpillars to the fungi no one saw underground. He gave her a hug.

“Next time you come,” she said, “if the tree has gone, forgive me.”

“I hope I can forgive myself.”

A week or two later she sent him a text that read, The tree is down. x She had added an emoji with a tear. The boy went round to see her after football practice, even though he had lots of homework, but she didn’t seem to hear the doorbell, or his knock, or the phone. So he climbed into the back garden over the side gate, and found her sitting where the tree used to be, in the dark. When she turned towards him her face shone in the light from the living room because it was wet.

The boy could smell the sliced wood. Under his shoes he felt sawdust clogging the grass. Then he realised that she was sitting on the stump. It was all that was left of the tree she loved. Now she stroked it with one hand.

The boy crouched down and put his arms round her. Her body shook but her crying was quiet. It might have made him cry too, but he didn’t do that anymore. He pulled away.

“No heartbeat,” she said, “and no song. The story has the kind of ending I never want to read.” She squeezed his hand. “I’ve been saying sorry.”

The boy wished she would stop crying, and blaming herself. He didn’t know what to say. And the thought that came into his head was too silly to come out: The tree knows you loved it. Because he knew trees didn’t really have hearts to love with.

But he did. He just didn’t have the words to make a difference.

When the young man was at university he called Grandma sometimes, but she couldn’t always hear him very well. She told him she’d paid for a hundred trees to be planted in Kenya.

“That’s good,” he said, remembering how he’d told his mates, “My gran’s obsessed with trees.”

“When will I see you?” she asked. “I want to show you something special.”

His parents weren’t sure she could stay in the house much longer but that was too sad to think about. When he came back he would cut her grass for her and weed her flower beds.

But his dad called him a few days later.

She was buried in a pod in woodland, with young trees growing up around her. A few weeks later he went to Grandma’s house with his dad, to help sort things out. She didn’t have many clothes so bagging them up for the charity shop didn’t take long. The boy looked at the books about trees, flowers, birds and animals, and remembered so many of the pictures from the days when he sat on her lap and turned the big pages. But what had she wanted to show him? Not knowing made it hard not to cry.

Then the young man found a ragged shoebox under Grandma’s bed. Lifting off the dusty lid, he found a wodge of photos, thick as a hardback book, wrapped in tissue paper tied with rainbow wool. Pencilled on the paper was his name.

Carefully he unwrapped a stack of photographs, all the same size. The image on top was of the tree, leafy against a grey sky. On the back of it Grandma had written the last day and a date, a recent one. She had taken the photo before the tree surgeon came to chop it down. Underneath it was the tree again, in sunshine, on your eighteenth birthday. He flicked through the pile to be sure but every photo showed the tree, bright and shady. Like the book he’d made as a boy, with a ball he’d drawn to rise and fall as he turned its pages, it was alive. The tree’s shape shifted as it filled and thinned with the seasons. And the clouds behind it moved as if chased by wind. The grass beneath it grew and neatened and grew again. Acorns scattered and disappeared from its roots. And the boy shrank, but his smile grew bigger.

The young man knew he was going back in time, as fast as a Tardis. He almost missed the photo of himself as a baby wriggling in Dad’s arms. Hello you. x

Soon, like a summer evening, the colour drained away to black and white. Page after page the tree breathed. A squirrel nibbled an acorn. Branches tugged and tussled and settled into stillness in snow. And then there was a young woman beneath them, with a mass of thick hair, wearing a long flowery skirt and smiling: the day your grandad asked me to marry him.

The young man stopped flicking and smiled back at Grandma. But there were still dozens of photos underneath her. Skimming through them he reached a girl, not more than eleven, in dungarees, standing high up in the tree and waving when she probably should hold on tight. The tree was the reason I moved back to the house when your great grandparents died. I grew up with it, see. X

He’d never seen his great-grandparents before but there they were, with baby Grandma in a heavy-looking pram. The date on the back said 1954. Before Kennedy was shot, or Neil Armstrong landed on the moon. Before people really understood how trees communicated – like people holding hands but feeding, warning, protecting each other. Was that what Grandma meant about the song?

He was still watching the tree breathe when he realised he was reaching the bottom of the pile. No one knows for sure how old the tree is but it was tall in 1939 when your great, great grandfather built the house.

Before that it had a different story to tell, and that might stay a secret. He straightened up the stack of photos and looked again at the tree’s last day. Suddenly he could have cried like Grandma had when he found her surrounded by sawdust, her hand on a wide, fresh stump. He remembered its living smell in the cool evening air, and the way her face had shone.

He turned to see his dad carrying two of Grandma’s mugs. She’d know how to plant a tree. She must have told him. He seemed to remember something about collecting acorns and putting them in the fridge. Why had he let her do that without him? Had he been too busy growing up?

“Ah,” said his dad. “The oak. I never really understood what it meant to her until it had gone.”

Passing the photos to his father he saw Grandma’s handwriting on the bottom of the tissue paper package.

With love, it said, and hope. xx