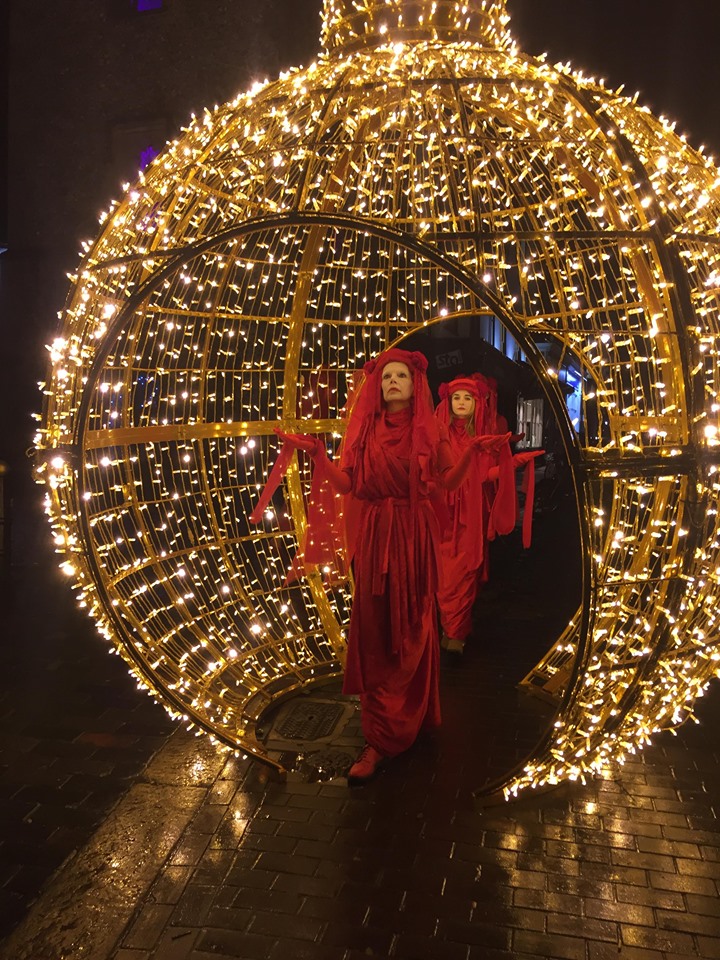 Rebelling in red: the time is now

I’ve become a Red Rebel, and the night before our first action I was wildly excited about leading the procession into St Albans Abbey for the General Election hustings. I wasn’t much help making the red robes and headdresses, having been humiliated in sewing lessons both at primary and secondary school. I was reminded, as the brilliant Bex dressed us all, of my friend Julie who came into my classroom back in 1997 before my first Parents’ Evening with a cloth for my table display. I did my best with it. She then quickly tugged and smoothed for all of a few seconds, leaving it inexplicably transformed. It’s a gift I don’t have. But I love dance and more importantly I’ve experienced the mesmerising, slow, silent power of the Reds up close in a crowd. Watching them pass through the Love Rebellion site at the back of Downing Street in October, I felt moved and compelled as their presence calmed, stirred and hushed everything and everyone around them. And they seemed untouchable in their mysterious otherworldliness. What Reds do is theatrical, borrowing from mime and the Chorus of a Greek tragedy but it feels to the observer less of a show than a strange connection, soul to soul.

When we entered the abbey we heard some people tell each other, “Extinction Rebellion,” but many have never come across the Reds and I’m sure many more are unsure what it all means. I remember once hearing the phrase, ‘the blood of our children’, but the Reds are more goddess than ghoul. They are sad, generous and compassionate. What threatens is catastrophe but the rebels are the alarm, not the fire. Like the Furies they offer a warning, but without frightening the children. And the stillness is part of the drama. The founder, Bristol’s Doug Francisco, acknowledges the potent symbolism of red, suggesting blood, flame and danger – now the death of life on earth – but also love. There are YouTube training videos showing how to simply convey that love, along with the mourning of climate grief and the powerful commitment represented by the fist lifted high while the head, lowered, prayerfully defuses aggression. No blame. The moves are simple; the key elements are the emotions vividly expressed and the desperately urgent purpose. Reds have a huddle before and after actions, and all I whispered during ours was, “With love.” But we also take one another’s hands, making eye contact and a deeply serious bond. We hoped for that kind of inner communication with the candidates, and with voters in the pews. But we also knew that there’s a new sensitivity about hustings this year, given the toxic and divided nature of today’s politics, and were prepared to be prevented.

In the taxi we talked of climate and ecological breakdown. From the moment we stepped out of the cab, we were in character. It was dark and wet as we walked from the Clock Tower to the abbey entrance, and much of the route was cobbled, sloping or uneven. We processed in line, just six of us, and eventually found ourselves, after warnings of police and security, stepping through the main entrance and beginning to walk slowly down the aisle. We were escorted by Graham, pristine in a suit and carrying white roses, and guided by local rebels. At once the stewards became jumpy but we’d agreed to stay silent and dignified and glide on obliviously. Apparently Graham was told by one that we were disturbing the audience and disturbing her. Nothing has ever been more disturbing than this existential threat facing every one of us. We continued but about halfway we were stopped. I couldn’t say exactly how because my head was high. We went back up a side aisle and then, in spite of repeated requests to sit down, ‘performed’ at the back until we had to leave to meet our cab. Some of those seated in front of us took selfies with us.

Did we make an impact? Certainly, although not everyone among the thousand or so will have seen us. Did everyone know who we were and why were there? I’m sure not. I understand that sometimes the Reds are accompanied by an explainer, or leafleters, but this wasn’t possible on such an occasion. Did we feel that it was worthwhile? Definitely. For a first attempt the context was challenging. Next time we may choose a high street. We have learned how to be more effective, need to use our faces more expressively, and have a plan to be escorted by a rebel carrying an Earth on fire as a back-up message. But I am completely in love with this creative, mysterious way of rebelling: a graceful, emotive and spiritual alternative to blocking roads.

We were all sadly conscious of the rebels on hunger strike outside political party headquarters and very much at risk. A few hours before our outing, more experienced Red Rebels visited them, and I can imagine the solace and strength they offered.