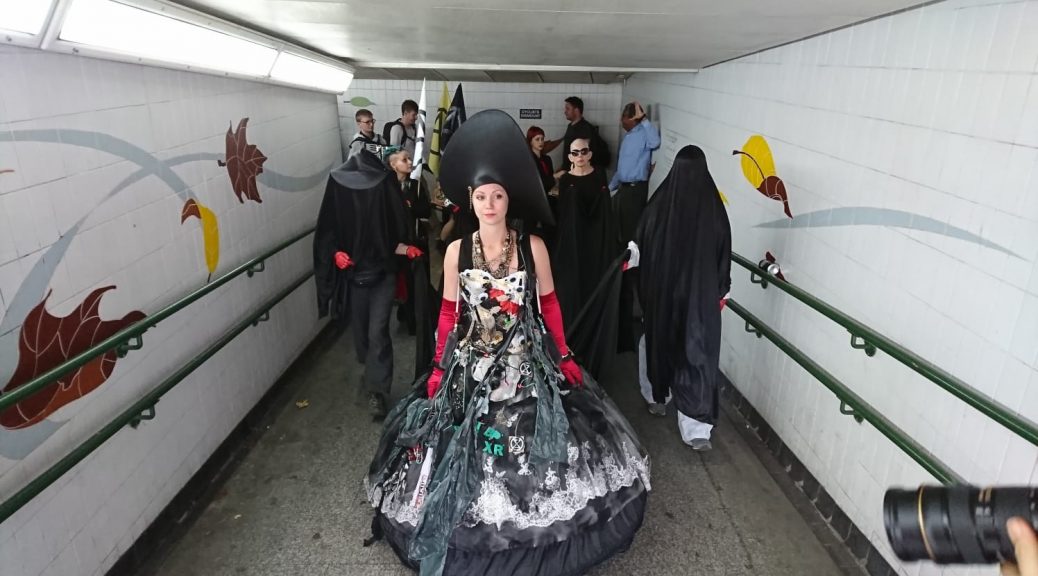 I’ve always believed in stories: that they make us bigger, more compassionate people, taking us beyond our own limitations and deepening our experience in a way that develops empathy and increases understanding – i.e. our humanity – through feeling rather than fact. I’ve cherished all my life the fundamental truths fiction explores. And when I learned that Donald Trump hasn’t read a book since he was seven, my response was to rest my case. I became an author in the hope of moving and inspiring young readers because I’d witnessed the power of Michael Morpurgo’s stories in my classroom, and concluded that only love and courage can generate it. Not knickers or robbers – or not alone! So whatever the genre or audience – I write for adults too – I’ve been writing about love and courage in different shapes and forms since 06, whether through alopecia, bereavement, bullying, loneliness, eating disorders, identity and self-expression, creativity, refugees or faith, injustice or care for animals or Earth. I’ve used fantasy contexts and I’ve written stories that feel absolutely real. But in a speech at Preston New Road (fracking site) one Green Monday at the end of 2018, I found myself saying that there was now only one subject worth writing about: climate breakdown. This is an emergency.

Going on the train to London, mostly for protests, and passing movie posters on the tube, I’d been a) wondering for a while what possible point there could be in telling such meaningless stories at this time in our history, and b) reminded of dancing on the Titanic. I’d feared that unless I could explore love and courage through climate change, I’d be wasting my time and that of my readers. And I’d be complicit in the media silence that was itself a lie. At that point in 2018 I’d joined Extinction Rebellion and already sat in a few roads. It was clear to me that although my keyboard activism was no longer enough, I must do a great deal more of it. So I began FOR LIFE, delivered weekly on my website and eventually turned into an e-book that can be downloaded for a donation to XR. It’s a novel about rebels and climate sceptics, some of them in the same family, and it allowed me to use real events as settings and translate my own experience into that of my characters. It wasn’t the first time I’d been explicit in my novels about the climate crisis. I’d created a young activist in 2009’s THE WATERHOUSE GIRL, and four women who, in THE BIGGEST SPLASH, consider how much they are willing to sacrifice for change. Since my dystopic START I’ve realised that reality is likely to be a great deal worse than I foresaw at that time. But I’d pretty much lived FOR LIFE, with my own swarming, week on Waterloo Bridge and arrest, and I wrote with even more passion than usual – surprised by how completely I believed in the characters I created to carry a story that had been mine. Unable to let them go, I returned with an extra chapter on my website in October last year, allowing Manda and Gem to glue on together to a wooden tower at Trafalgar Square (yes, as I had done). And, as the soap writers say, the door is still open…

But I’ve struggled in the last year with my identity as a writer. The urge to do the most I can is very powerful. As a small author, I can’t argue that fiction is enough. Activism is surely, as time runs out, our best chance. Determined only to write about this one overwhelming subject so much more important than any other, I’ve updated a novel written just before XR to herald it, and my short story collection INSTEAD features The Activist. I’m working on a new collection approaching the theme in many different ways, and began with The Trial – putting a young rebel in a Magistrates’ Court where I had been in the dock myself. But I’m starting to find the writing hard. Another story about a family row over climate is proving a disturbing struggle. How do I avoid using this drama for a transparently didactic purpose? How do I find a narrative that has more structure than a slice of life? Most importantly, did I appreciate the emotional cost of exploring in my working or creative life the truth that fills my mind, heart and conversation, and the rest of my waking hours? After all, although I was moved by Barbara Kingsolver’s Flight Behaviour, I’m not searching as a reader for cli-fi. In the last month or so I’ve enjoyed A Tale of Two Cities, Olive, Again by Elizabeth Strout, The Orchid Thief by Susan Orlean, Don’t Touch my Hair by Emma Dabiri and Their Eyes Were Watching God by Zora Neale Hurston – every one of which I considered worthwhile. Yet only the recently written Olive, Again alludes to the climate crisis, and even The Overstory, which I read just before Christmas, has a wider, almost timeless sweep that only takes in, without stopping, its protestors in the trees. All of them are to differing extents about love and courage, and all of them increased my understanding of experience I haven’t lived, places I’ll never go and people I’ve never been or known. And of course, knowing the truth Dickens and Hurston didn’t imagine, I carry it always with me. There’s no deleting it. It connects with and illuminates the truths that went before, making the violence of revolutionary Paris and the pillaging of Florida’s natural habitats even more distressing, along with the sexism and racism, power play, greedy hedonism and materialism on the page. But perhaps most of us, even those who’ve never craved escapist fiction, benefit from visiting past worlds that have not yet reached an alarming 415 ppm, or imaginary worlds that never could.

Allowing respite or ‘regen’ through functional denial is probably necessary for the mental health of those living with climate grief, and for me that means reading stories about other kinds of love and courage – along with walking in woods, seeking out snowdrops, listening to music, visiting art galleries and watching dance. Perhaps – and I’m not sure – I need to keep writing about other kinds of love and courage too. An online writer friend just responded to THE DREAM SPEAKS BACK, a book I co-wrote about childhood, individuality and imagination, with “THIS is how the world heals.” Isn’t all true creativity a way of loving? Maybe I need to remember that values implicit in fiction can be communicated as effectively as those more explicitly foregrounded. And while I spend more time on my activism now than my writing, perhaps I need to write just to hold on to myself – or rather, the best of myself.

XR is an enormously creative movement. You may have seen huge birds spread wings wide across a road; giant skeletons dancing; a woolly mammoth carried through London; the theatrical power of the Red Rebels; the garden that grew on a bridge last April. You may have heard Blythe Pepino sing the haunting ‘Emergency’, with a tune that would devastate without the lyrics. I was part of an action protesting against BP’s Carmen, with that aria reworded for a rebel opera singer, and an extraordinary recycled costume. I’ve met many activist artists and musicians, including Lola Perrin, who has composed and performed a series of wild, harrowing, visceral and beautiful works for piano, all of which are inspired by the catastrophe science warns us to avert. My response as a listener was to express something deep, emotional and wordless in dance, and as a recipient of a gift I felt real gratitude. But it would be challenging for me, and possibly for Lola too, to translate into words everything the music means. Later in February, the Vaults in Waterloo will host a late-night, fundraising celebration of rebel creativity of many kinds, for Londoners a few decades younger than me. Is it easier as an artist or musician to focus on a climate theme – without repetition, facts and figures or preaching – or do I only ask that question as a writer?  There is in any case no doubt that Extinction Rebellion draws on the arts to connect with the public, raises rebel spirits with creativity and finds joy in the life force it represents.  It would be fair to say that rebels cherish the arts as much as we are driven by the science, and value them, like the natural world, more than money or success. We’re mindful, too, that the greatest cultural achievements of humans on this earth are as much at risk as we are. Imagine a planet where all traces of Shakespeare and Rembrandt, Einstein and Beethoven, Florence, Angkor Wat, the Taj Mahal and Stonehenge had been erased along with the birds, lizards, amphibians, primates and people.

Good fiction has always been about who we are and what we need, how we see and shape ourselves and the world, who and what we love and fear. In an existential crisis, perhaps every one of us who recognises it as such must frame new answers to these old and immortal questions. What story are we telling in our lives? What, as human beings, can we be, as well as do, if we are to redefine and redeem humanity, rather than destroy homo sapiens along with other species? What, amongst the rubble of our habitual wants, amounts to more than what Hurston would call a hill of beans? Love, probably. And courage. How bravely can we love?

I think I’ve always written about that. And I know I’ve never bothered to read about much else.

2 thoughts on “Creativity: a way of loving”