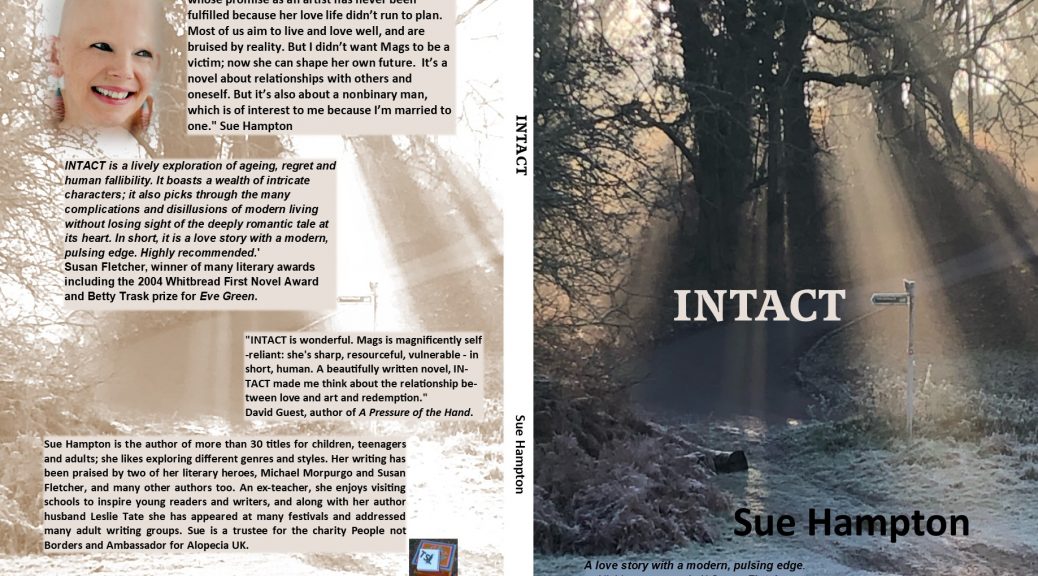 It’s not exactly news that another Sue Hampton book is about to be published, not only because I’m heading towards 40 titles now but also because there won’t be a One Show sofa, a launch with glitterati and Prosecco or large underground poster to vie with Hollywood. And there are rather more important themes for the news anyway, with climate injustice and chaos, rising inequality and poverty, racism and fascism emboldened and more than 60 million refugees largely abandoned by the world while the arms trade thrives. Anyone who has read my contemporary adult fiction knows that I rarely stray far from these overwhelming issues. So these readers – bless them – may expect the heroine of my new novel, INTACT, to be another climate activist like Gem and Manda in FOR LIFE and my four heroines in THE BIGGEST SPLASH. But this novel, which may well be my last, is set a few years ago, before Greta and Extinction Rebellion, and Mags is less troubled by her vague awareness of the need to be environmentally responsible than by the dramatic narrative of her own life. This is the intimate story of a woman who at sixty looks back on a non-linear life she never expected, and whose four adult children – by three men who in different ways betrayed and hurt her – have problems she can’t fix. Mags is impulsive, passionate, eccentric and funny. Drawn to creative men, she has been their muse and secretary and worked in a supermarket where she challenged the dress code. As the novel begins, her life reshapes itself again when another relationship ends, and she’s had enough of playing the victim in her own story.

So INTACT explores her new beginnings, but also her past. She hasn’t forgotten an unusual boy her parents fostered and then rejected – a sensitive, introverted boy who borrowed her dress and was delighted with the gift of a pretty hairband she didn’t want. Young Maggie tried to care for and protect him and knew how much he loved her for that. But where – and who – is Georgie now, and what pronoun does Georgie own? To what extent is the episode of their briefly shared childhood still intact, for both of them, along with the bond they made?

This isn’t a traditional love story, and I must add that although it was inspired by my extraordinary non-binary husband, Georgie is imagined, a character quite distinct from Leslie. INTACT is fiction, not autobiography. There are many kinds of love and sometimes we don’t know exactly how to label and differentiate them. Sometimes we don’t know exactly what or who we want or need. INTACT is about two very different individuals whose lives have diverged significantly during the fifty years since they last met. It’s about choices and reservations and the possibility of healing from trauma. Mags has never wanted to conform, but she hasn’t been the mother she meant to be or the artist she imagined, and much as she’d like to shake off some of her most vivid memories, the past can’t be erased. Now the future seems exhilaratingly but disturbingly uncertain.

I have a tendency, probably common among authors, to claim (albeit privately) each new project as my best writing so far. INTACT is no exception although this time I may be saving the best till last. Readers of this blog will know that I’m fairly busy as an activist these days. They will also be aware of my profound admiration for Susan Fletcher, whose novels I genuinely love – even more than the work of other award-laden heroines like Carol Shields, Anne Tyler, Marilynne Robinson, Elizabeth Strout, Toni Morrison and Barbara Kingsolver – so I was thrilled but fearful when she agreed to read INTACT. Her response:

“‘INTACT is a lively exploration of ageing, regret and human fallibility. It boasts a wealth of intricate characters; it also picks through the many complications and disillusions of modern living without losing sight of the deeply romantic tale at its heart. In short, it is a love story with a modern, pulsing edge. Highly recommended.‘

If you read it, I hope you agree. Click here to pre-order a copy. And thank you to Jill Hipson for the beautiful cover image.

2 thoughts on “The Last Time”