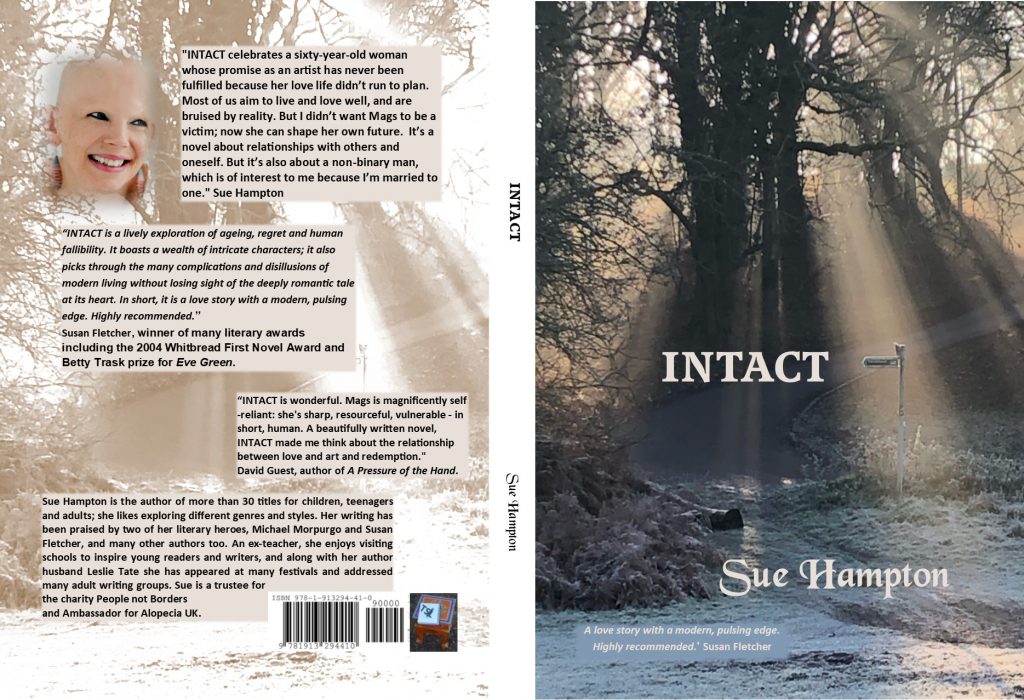 Fiction and reality: how close a connection?

A little more than a couple of years ago I began a novel for adults – only my second in over 30 titles – inspired in part by falling in love with, and marrying, a non-binary man who wears women’s clothes. And real life has twice now caught up on it.

Georgie is in many ways very different from my husband Leslie Tate; I’m not Mags, although we intersect now and then. And their unconventional love story, which is no romance, is not ours. The narrative draws at least as much on imagination as on my own ideas, passions and experiences, because very little that happens to Mags has happened to me, but that doesn’t mean I don’t inhabit it along with the Britain and world around them. It’s always my intention as a writer to keep my fiction as real as possible, even with fantasy stories for children. By that I mean I aim for emotional authenticity: a humanity in my characters even if they are not human. INTACT is not autobiographical, but I hope it feels true.

When I began this book I considered myself a bit of an activist with Campaign Against the Arms Trade, and placed Georgie on the road to the London Arms Fair in 2017. But when it came to climate change, I relied on the written word – in my blogs, tweets and posts but also in my fiction – to qualify me as a kind of keyboard warrior. I was a concerned, even despairing Green Party member and a supporter of Stop Ecocide who marched at every opportunity and visited the fracking site at Preston New Road to support the protest there, but no one had heard of Greta Thunberg and I was living both with very little hope and a less than deep understanding of just how terrifying the climate science really was. By the time I finished my story, all that had begun to change.

I joined Extinction Rebellion in October 2018, when my novel now begins. Since then, I’ve been arrested three times and defended myself in court, because I’ve wised up to the future horror awaiting us if we can’t cut free from fossil fuels and live more consciously and caringly on this Earth, without consuming and destroying. There’s having a general awareness of the truth – like Mags in INTACT – and then there’s living and breathing it because it’s deep in the heart. Transforming from one to the other, as many have in the last eighteen months, is not a reversible process. And sharing the truth isn’t easy because those hearts and minds that haven’t absorbed it are spared the grief and sorrow that can be overwhelming. I decided to write a novel about rebel characters I created to experience variations on my own activism, thoughts and emotions. Now an e-book that can be downloaded for a donation to XR, FOR LIFE is closer to present reality than anything else I’ve written. Having finished it, I could no longer see any reason to continue as an author once it had become necessary for me to devote what energy remains to rebelling… for life. But what of INTACT, the manuscript I believed to be my best writing, now that it had been overtaken by more urgent issues?

Well, it may be my last book. But I had to update that manuscript, already underpinned by my values, by setting it in the autumn and winter of 2018 and adding references to the climate movement that swiftly became global. Georgie reads the IPCC report. Mags is trying to go ‘properly’ vegan. One of the younger characters has joined XR. The insertions fitted seamlessly, but don’t alter the fact that this is an intimate novel about relationships, fulfilment and the power of the past. It explores love of many kinds. And of course love inspires Extinction Rebellion and my Quaker peace activism. I’d find it hard to write about anything else.

As the publication of INTACT drew closer, reality broke in again, this time with the Covid-19 virus that has, as I write, killed nearly 70,000 of us globally, confined us to our homes and made many lucky enough not to be in mourning both frightened and angry. It is, of course, a kind of preview of an even more frightening future guaranteed if we don’t avert climate chaos. It requires change and adaptation, and exposes the shallow desires we mistook for needs, leaving us with the recognition of what really matters to us as humans – or what it means to be human. Which is to love and be loved. As Mags and Georgie both know, not least because more than fifty years ago as children they loved each other very much.

The crisis may allow some of us the freedom to read extensively but this not a good time to launch a book. I expect there will be fiction before long about lockdown and the loss of loved ones who died without family beside them, but I won’t be writing it, not unless I live it, because that would be cheap, inauthentic and insensitive. For now, at a time when it’s hard to have a socially distanced conversation about anything but the virus, some readers will choose escapism. But as a writer I can’t do that. I have to connect fiction to reality; that’s an emotional imperative for me. The lockdown has nudged me into writing the sequel towards which INTACT could be said to look. But I will have, as always, to let the characters lead. They are not for me to awaken, recruit or transform, and I never know exactly where they will lead the narrative. But I do know that 2019 was very different from 2018, and if Mags and Georgie live through that year it can only be, as context, the time it was. Maybe it will change their world too.

Click here you’d like a copy of INTACT, praised by my favourite living author, Susan Fletcher, delivered through your letterbox.