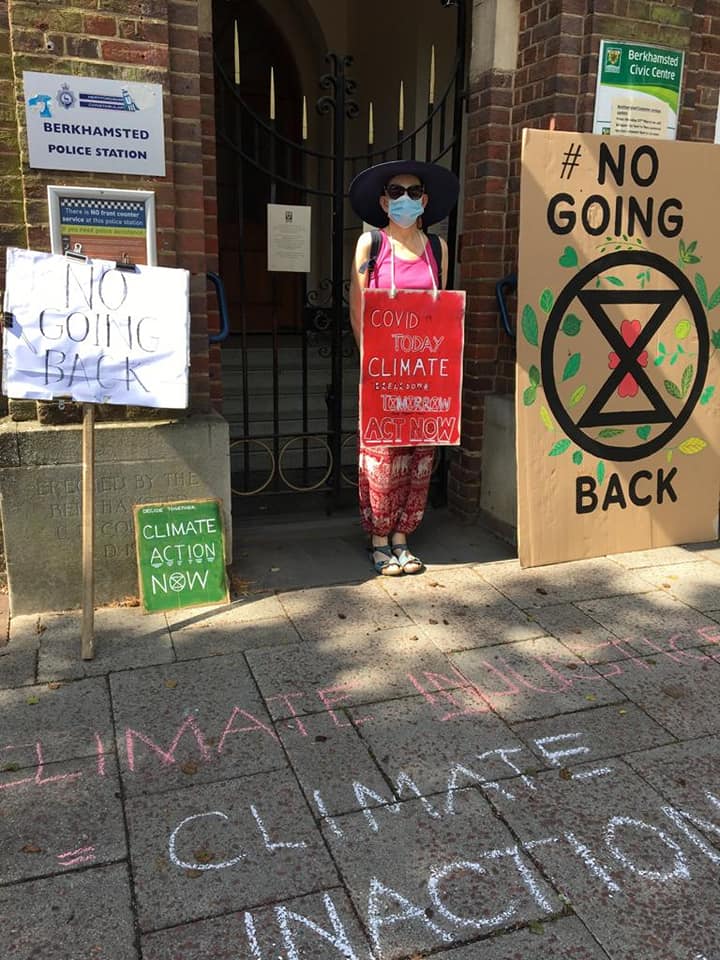 It’s Sunday, so I was on my high street with a placard again, with XR friends – all of us in masks and socially distanced. When #nogoingbacksundays began we were deep in lockdown, George Floyd was still alive and there was hope that as a species and a nation we might learn from the last few months, and recognise that business as usual was already killing us before Covid-19. We’re a small group of regulars and we stand in silence, appealing for climate justice and connecting with the Black Lives Matter movement. After all, like coronavirus climate change affects people of colour both disproportionately and first.  If we look to the global south, to the Pacific Islanders and indigenous peoples, we see terrible climate injustice, and those suffering have done the least to create the crisis.

For Leslie and me, this Sunday protest falls when we would otherwise be ‘joining’ our fellow-Quakers for Meeting in our own homes, so we try to approach the hour meditatively or prayerfully as peaceful witness, a kind of vigil. Very few passers-by engage with us. A few hoot to show support from cars, or give us the thumbs-up – like a plaited girl of about twelve across the road, a mini-Greta – but most either ignore us or scrutinise our messaging before turning away. We’ve had no hostility, and it feels important as one of few actions currently available to us. But  however many times I take this kind of stand, it’s always a shock – that human beings are walking on past as if we and climate change don’t really exist, when in fact we’re acting on a scientific consensus and with love. When what’s at risk and already being lost and destroyed, is everything, is LIFE ON EARTH. When the normality the government aims to revive is deadlier than the virus. When the nutters going over the top and classified last year as terrorists are actually responding rationally to the evidence as the world’s experts present it. Or rather, we’re under-reacting, in our well-behaved way, because weeping and wailing would be more proportionate and trying to shut down government arguably quite reasonable since our leaders are the criminals. There’s usually a point when I sing internally, or remind myself to focus on the light that is both truth and love, in order to hold on to hope, because the alternative is the kind of grief that hollows out and immobilises. Then I realise that perhaps what most people are rejecting, or sidestepping, is that very grief that truth awakens and once faced can never sleep again. So I remember to understand.

Yesterday, when rebels talked to some sympathetic councillors on Zoom, everyone was very decent and polite, articulate and respectful. The meeting was seen by most as encouraging. But again there was a moment when I did weep and wail, inwardly and privately, not just with frustration at the snail’s pace of change at local government level (arguably speedy relative to national government) but at reality. Underpinning our low-key conversation was impending catastrophe, with rising temperature and sea levels, extreme weather, climate refugees, and millions of deaths right now: Greta’s world on fire, and at war too in more ways than one. Yet anyone overhearing without English might assume from the tone that we were debating the new colour scheme of the council chambers. We have to play this game, apparently, to avoid all the negative labels used by Cressida Dick and the Met, the Daily Mail, our Prime Minister and Pritti Patel. To seem mature and respectable rather than hysterical. Because right now, when people abandon democratic channels and peacefully shut down bridges, glue themselves to the Department of BSEI, sit down in airports or take down statues of men still honoured in spite of their crimes against humanity, those protesters are seen as a threat to society and decency – even though the goals of such protest are justice: climate, racial and social. The inversion is breathtaking. Yet such protesters are the modern equivalents of those radical reformers society learned in time to admire, to thank – in spite of their less than muted opposition to abhorrent norms we no longer attempt to justify. (Not even the far-right thugs do that, because they have and require no justification but ignorance and hate.)

Yes, I’m emotional, obsessed and often devastated by everything I challenge: not just climate inaction and systemic racism but the arms trade at which Britain excels along with the world’s betrayal of refugees fleeing from war and oppression facilitated by the rich white nations. Isn’t such emotion legitimate? I didn’t expect to persuade the courts that my actions when arrested were necessary, in the attempt to prevent a greater crime, because as magistrates are advised in XR cases, they’re “not about climate change or morality”. The law, like governments, still sleeps, adhering to rules outdated by the present reality fronted by activists but also by the United Nations and David Attenborough. As a shy person who prefers to let others do more of the talking, I sometimes conform to the low-key exterior that effectively denies that reality. I often duck the confrontation the truth would risk. But I have learned from my recent reading that racial injustice calls us to be actively anti-racist rather than just colour blind, and that only honouring the truth of lived BAME experience is enough. It’s the same with climate activism. We must honour the truth of lived BAME experience of climate breakdown and of evidence uncovered over decades of scientific research, study and modelling.

Even if it makes us trouble-makers, law-breakers and extremists generally unwelcome at parties.