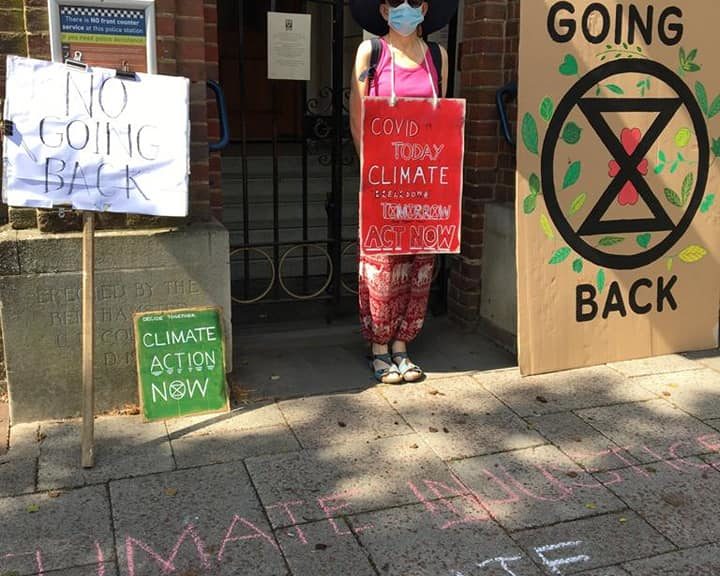 Some of these experiences will be common to many; others are more individual. It’s possible that I had the virus mildly early on, but I haven’t lost anyone close to me and that makes me very, very lucky. I’m acutely aware that for some humans in other parts of the world with no health service and no savings, this year has been and remains both devastating and terrifying, so I know ‘white privilege’ is written all over my own perspective.

I’ve been both very emotional about the death toll and frustrated and angry that in Britain these figures have now become so hard to find. It disturbs me that while in many countries the cases continue to rise, the shock and grief of our collective response has dulled. I tell myself that even when only 11 UK deaths are recorded, each one counts for just as much as every individual in eight or nine hundred.

A recent procedure of my own – a scare that proved unfounded – showed me the detail of the care taken in a hospital environment, reminding me of the ongoing vulnerability of medical staff and our duty to protect them as well as each other.

My anger at the government, initially because of the failure to provide these courageous people with PPE, peaked with deaths among NHS and care workers but has not abated as one failure has followed another.

I’ve learned to appreciate the work of the underpaid and undervalued in a shockingly unequal society that I hoped we could reconstitute more justly.

At People not Borders we were able at the height of the pandemic to contribute financially towards PPE etc for refugee camps. However, it’s been hugely frustrating being unable until recently to raise much money or collect donated items, so it feels great to begin sorting and boxing again for Greece, and to see shoes we’ve bought reach refugees in Dunkirk.

I chalked ANOTHER WORLD IS POSSIBLE on walls around town and yes, in the quiet I imagined I could “hear her breathing” (Arundhati Roy). I used to love walking in the middle of the road, the way strangers greeted and helped each other, hearing birdsong and having time to look, listen and think.

I actually believed for a while that the world might take the opportunity of lockdown to make the radical changes necessary to avert climate catastrophe – and have more recently raged as our government has prioritised bailing out polluting industries.

I’ve trusted Channel Four News to try to find the truth and care about it. It’s thanks to the team there that I have understood how differently the virus has impacted elsewhere, and how manageable for people like me the lockdown has been.

My reading, fairly prolific, and has broadened to include inspiring and/or educative non-fiction titles such as Why I’m No Longer Talking To White People About Race by Reni Eddo-Lodge, The Hammer Blow by Andrea Needham, The Living Mountain by Nan Shepherd and Dear Life by Doctor Rachel Clarke. But I still feel a little self-indulgent reading before 6pm!

I’ve had time to read articles, mainly about climate change and racial injustice, online. I’ve even tried to retain some facts.

Of the novels I’ve read, my favourites were Annabel by Kathleen Winter, The Girl with the Louding Voice by Abi Daré and Notes from the Lost Property Department by Bridget Pitt. I also found Girl, Woman, Other by Bernadine Evaristo very powerful.

Having decided not to write any more fiction myself, I have – preposterously – completed an adult novel begun in, and because of, lockdown. My decision to focus on activism and family from now on had not factored in a global pandemic; I had to do something and writing is what I do. The novel, a sequel to my 37th title, INTACT, which was published in March, might or might not exist in the future as an e-book, depending largely on whether a few people buy INTACT! But I’m lucky that a pension and simple living spare me the financial problems most authors are facing.

My daily exercise has been a walk with Leslie and we have built up our fitness to manage four or five miles on occasions, but have struggled to avoid runners in particular but also, and increasingly, people who are neither wearing masks nor taking care to keep social distance.

Every day, even if restricted to street walks, we have looked for flowers and celebrated those seen for the first time (this year) as they’ve bloomed. Trying to bring back or discover their names and hold on to them until we are home again has been our alternative to learning a new language or, in the case of certain gifted young people, all Chopin’s Etudes.

Those talented siblings, the Kanneh-Masons, have brought me joy and elation with their weekly livestreams from their living room in Nottingham.

For weeks I cleaned more often and more intensively but that was a phase.

Zooming continues in spite of having lost some of its appeal. I often find myself even less likely to contribute on screen than I’d be in person. They’re a blessing for the shy, as is the Leave Meeting option.

My new concept of a busy day – applying objectively ridiculous pressure – would have made the busy, pre-lockdown me laugh out loud.

I abandoned bras with very few exceptions and with pleasure, but that leaves me feeling old and exposed when hanging loose on the street without a hoodie or XR jacket.

Every bedtime we have recalled the good things that have happened that day, some of them small but cherished all the same – like yesterday’s clear view of a Red Kite gliding directly and not far above us.

Early in lockdown I continued an inter-faith vigil for the climate that had begun in Westminster but had to regroup online. It was moving and heartening sitting in silence on my living room carpet with a candle and various texts: not just Quaker books but XR’s This Is Not A Drill, The Book of Joy by Desmond Tutu and the Dalai Lama and I am Because You Are by Satish Kumar. I also developed my own little daily regenerative routine, which endures and never fails. (I make prayer hands and say “Peace,” then lift them for “Love” and raise one arm in a loose fist for “Justice”, head bowed.)

The May Rebellion couldn’t happen, which was a huge disappointment and at times deepened my despair.

But that month my first foray for any purpose other than exercise was with Extinction Rebellion, when a small group of local rebels began to witness safely, in masks and two metres apart, on the high street. Initially we made NO GOING BACK placards, with almost all the shops closed. Continuing every Sunday since, we have now changed the message to BUILD BACK BETTER, but I also chalk that Black Lives Matter. Climate justice and social and racial equality were always closely connected but from now on, in XR, they will go hand in hand.

In France the Citizens’ Assembly voted overwhelmingly for a referendum on Ecocide Law. I allow myself to hope that such a law could soon be passed, and that before long Ecocide will be declared an international crime – which would change everything fast.

My emails to my Tory MP have become even more frequent and on 25th June I was part of a socially distanced XR presence at his constituency office. When he voted against reuniting child refugees with family in the UK just recently, the emotional tone of my communications changed as I appealed to his humanity. So far I have received no reply.

I’ve been glad to be on antidepressants (since my XR trial in October) because for me they work and I’ve stopped feeling ashamed.

I won’t be alone in expressing the wish that I’d been born in New Zealand where one world leader shows integrity, compassion and wisdom.

The Royal Academy of Dance ran some weekly online ballet lessons which I took with some excitement, about sixty years after first planning to be a ballerina but never ever being taught. I did find the tuition more formal and less exciting than I’d hoped, and objected from a feminist perspective to being encouraged to flutter eyelashes – in my case non-existent – as part of the end-of-performance curtsey.

Like many, I’ve wished we had a garden, although in the shared space at the back of the flats neighbours who didn’t really interact have now bonded and it’s lovely to see children playing safely together.

Also like many, I’ve planted seeds for the kitchen window sill and have hopes for the little basil shoots that already have the appetising scent of a holiday in Italy back in 2005, the last time we flew anywhere.

I’ve pined for my favourite naughty vegan treat of chips in paper from the fish shop next to Berkhamsted station, where I’d been indulging 10 or 12 times a year in conjunction with getting the train to London. Tempted as I am, I’m not ready for a takeaway yet.

Today my 9 month conditional discharge from the court expired. We are planning the next rebellion but without knowing what will be possible or safe, and I can only hope we’ll wake up a government that for all its greenwash is still hell-bent on pushing us over the cliff as fast as possible.

More than anything I have missed hugs with family and friends, seeing family and friends in person, across a café table or our kitchen, and in particular I’ve felt the loss of my Grandma Mondays with my grandson. I’m lucky that he lives a few minutes’ drive away and in recent weeks we’ve enjoyed his garden with him and his parents. All the same, every time we’ve left I’ve cried because I just want to hold him, and sit him on my lap for a story, and play all day. And I’ve seen my daughter once since March.

Since I stopped teaching to be a full-time author in 2008, Leslie and I have spent most of our waking and sleeping hours together, but the extremes of early lockdown confirmed for me how very much I love him, how happy we are together (almost all the time) and how fortunate that makes us.

I’m conscious that for many thousands of people in the UK alone this year has brought grief, loss and pain. I’m very, very angry with our government because it failed them – and the NHS, and care homes and care workers, and bus and taxi drivers too. I’m furious because of the government’s ever-flowing stream of ‘world-beating’ lies and because in so many ways they’ve prioritised profit over human life.

I’m more determined than ever to work for that better world.