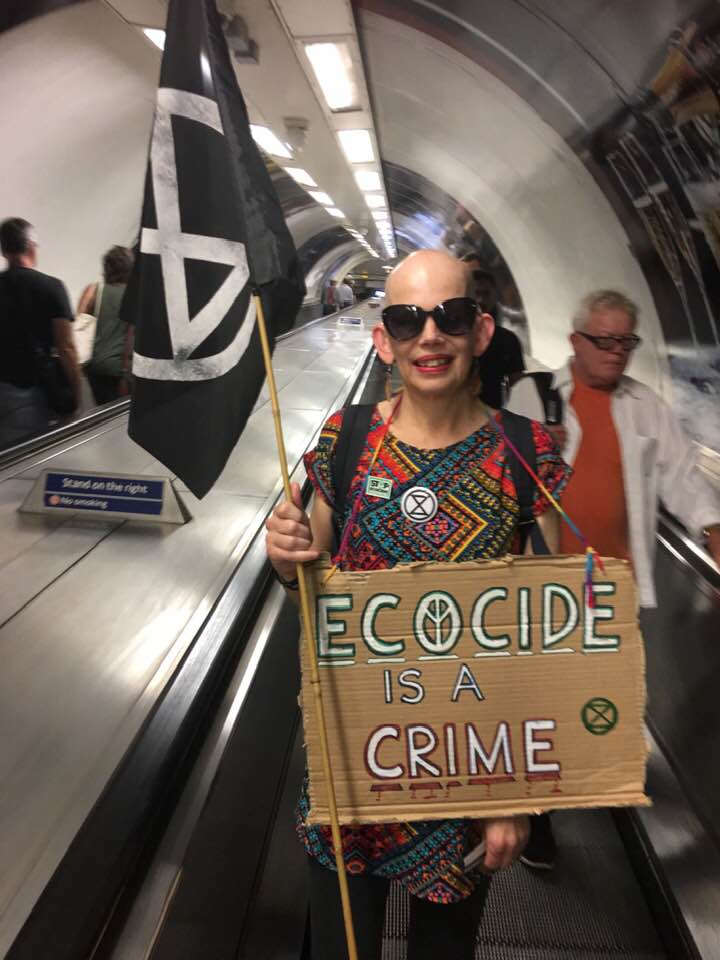 Rebelling, and being bald

I might never have become an author if I hadn’t lost my hair. Alopecia Universalis gave me a story to write when I created Daisy in THE WATERHOUSE GIRL, which Michael Morpurgo told me was beautifully written… But now that I’m more of an activist than a novelist, I’m wondering whether alopecia played any part in enabling that, and I think it did. Daisy, is after all, a young pre-Greta activist (even more so in the sequel), and the person I wanted to be.

It’s a fact that I was brought up by Pacifist, anti-materialist parents who trod lightly on the earth, so yes, I might have found my way back even with hair! But although I rarely think about my alopecia or remember to explain my bare scalp – and no longer dream of waking with a head of hair – it’s part of me in the sense that it’s taught me a few important lessons. I’ve lived in a minority since 1981. I’ve got used to being perceived as different since I abandoned my wig, and it felt to me more honest, more authentic, my own personal decision arrived at after nearly three decades of pretence and fear. I don’t want to minimise the impact of hair loss on anyone, whatever age or gender, because I’ve met hundreds of people with alopecia and not one of them just shrugged it off with, oh, that’s funny, never mind. But in my cowed days it disturbed me that in spite of knowing hair loss was a very, small loss in the context  of war, hunger, poverty, racism and other bigotry, cancer and any number of life-limiting physical conditions, I let it assume huge emotional proportions and dominate me psychologically. And it always angered me that this shallow society of ours was to blame with its implicit expectations of women to prove that, with the right appearance and lifestyle, we’re “worth it”. I blamed the media for my failure to live by the values I tried to hold on to through years of consuming and desperately needing beautiful wigs that cost more than 3K. I wasn’t the person I wanted to be, and I was unhappy – until I met Leslie, who showed me that I must embrace the way I look in order to stop being undermined. That freed me to ditch the disguise and be myself again.

My activism, such as it is, is a recovery of my true self in a wider sense. When I wore a wig, terrified of discovery (wind, rain, headlice, sand and heat) I was trying to make myself normal, conventional and acceptable – in the world and to myself. When I stopped I was signalling that I was ready to be misread, ridiculed and othered.  So I had some practice, after trying to please all my life, of not caring what people thought of me and shrugging off comments like alien, baldy, skinhead and egghead. That helps when you take a stand that earns Rebels the even less appreciative labels weirdo, extremist, nutter, terrorist or criminal. The people who mocked my hair loss didn’t have the knowledge, understanding or empathy to respond differently. When people denigrate Extinction Rebellion they too lack knowledge, understanding and empathy, thanks to a government and media that withhold the truth about climate breakdown. As a woman with alopecia and author in school, I saw education as part of my role and purpose; now what XR aims to do, along with pressing government to act, is educate the public who’ve been misled. In assemblies I used to wake my listeners to the truth that we are so much more than the mirror shows us; that diversity is rich and respect, like compassion, our human right; that the identity that counts is who we are, inside, and the values that determine the way we live in this world. As an activist my message remains in some ways the same, but now I’m more explicit about those values of caring for the Earth and its living creatures, each other and those furthest away whose experience of climate change may be more devastating than ours.

I suppose as a bald woman I challenge norms, just as activists do. Bizarrely, our norms in the affluent West with our heavy carbon footprints are self-destructive and threaten the future of many species, including our own. I can’t claim that the norms women try to live up to, with the right hair, figure, clothes and accessories, are equally damaging, but I don’t think they help anyone except the fashion and beauty industry. Humans are quick to judge others and find them wanting; hence the bullying of some children with alopecia. In supporting those (typically wise, kind) children I appealed to the hairy to recognise our common humanity, feelings and needs. As an activist I’m appealing to nations to work together through differences to address a shared and overwhelmingly huge problem. XR embraces no blame, no shame and invites everyone into one endangered human family. In school assemblies as in my fiction and with XR, I’m calling on all of us to be – and do – better. Not at conforming, presenting, consuming or competing, earning or achieving status in society, but at loving.

People with alopecia of one kind or other often feel unlovable. I know I did. It was hard to love myself when I looked at my reflection. Now I don’t blink; I’m just me. One of the ways we delude ourselves is through tribal identification with those like us. As a Rebel I hold on to a truth shared by Gail Bradbrook in This is not a Drill: “We can only protect those closest to us when we remember our love for those furthest away.” People who think XR is political (and yes, demanding societal change could be seen by definition as political) fail to appreciate how fundamental love is to the movement, the motivation and vocabulary of Rebellion. I’ve always been spiritual, and I’m trying to follow Jesus because that’s the way of love. Talking and writing to young people with alopecia I talked about soul and spirit, not appearance or success.

When anyone in the world of alopecia called me brave I felt a fraud. I’d been so timid for so long, and let alopecia limit me. It’s the same now when people see me getting arrested or in court, or just protesting again, and mistake all this for courage. I was numbed by shock following my first arrest and I cried in my trial. I baulk at living in a tree to stop HS2 or even sleeping on a bridge. If I manage to do anything anyone considers brave in spite of being naturally fearful, it’s because the truth about the climate and ecological emergency overrides everything. Anyone who reads the science with heart as well as head engaged is overwhelmed, and the normal fears and concerns are swallowed whole. At the moment my activism feels like the very least I can do to serve peace, love, truth and justice, and I honour those who give so much more.

Yes, I’d probably be an activist with hair, because I am after all my father’s daughter and my brother’s sister. But I’m oddly thankful for alopecia for paving the way by undermining but eventually liberating the real me. As I like to write on placards and chalk on roads, and as it says in the Quaker booklet Advices and Queries, it boils down to what love requires.