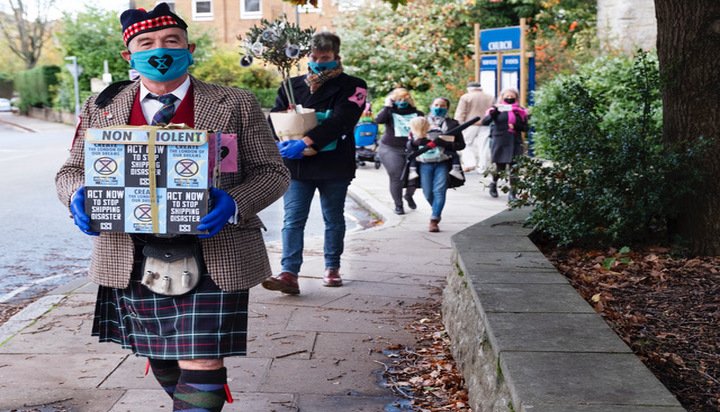 We’re living in a world where so much is inverted that in a late night drama we’d relish the satire. For four years the President of the United States has lied habitually and often extravagantly, but been revered by followers who would rather believe him than check, or respect, the facts. A man little information, understanding and self-control claimed to know more about everything than anyone. A man who doesn’t go to church held a Bible (upside down) outside one, while on Twitter many of his devotees warned that the images of riots and fires on the streets showed what America would be like under Biden WHEN IT WAS HAPPENING UNDER TRUMP, who’d called in the National Guard and refused to condemn killings by the Police or to recognise the legitimacy of protest by BAME humans highlighting evidence of systemic injustice. He’s a man who scorns the expert consensus arrived at through fifty years of peer-reviewed climate science by deciding the world will cool soon: “I don’t think science knows” – and when it comes to Covid 19, knows better than his Chief Medical Officer and recommends drinking bleach to kill the virus. And I’ve only just started to itemise the ways he’s inverted reality, like a patient suffering from delusion or Narcissistic Personality Disorder. Yet instead of praying to rid the White House of a sexual predator, before the recent elections the President’s spirital adviser Paula White conducted a kind of frenzied exorcism in order to keep a dark force out. It’s as hard to comprehend as it is to stomach.

Enough, more than enough, of Trump. But in the UK the picture is not very different, except that the Prime Minister’s vocabulary is wider. Johnson is equally unconcerned with facts and free with boasts, promises and fantasies. But while Trump left the Paris Accord and WHO, Johnson prefers to assume a leadership role in fighting climate change and a world-beating track and trace system to control the virus. Perhaps it’s the latter claim that is more transparently ridiculous as the UK exceeds 50,000 deaths ahead of Europe.  Yet when it comes to climate the claim is laughable too. Since the Paris Summit the UK government has led the EU only in the sense of the biggest fossil fuel subsidies. When the first lockdown provided a pause from which to begin differently, the UK bailed out airlines among industries with huge emissions. As Greta Thunberg pointed out, we massage the figures to reduce our carbon footprint by excluding aviation, shipping, and consumption and import emissions. Were these factored in, as the Climate and Ecological Emergency Bill advocates, UK emissions would have fallen since 1990 by a mere 10%. This is nowhere near enough to avert catastrophe, just as the 2050 target for the UK to reach carbon neutrality is nowhere near soon enough – as the science makes terrifyingly clear.

I remember Greta saying that as she grew up she couldn’t believe that life on earth was really at risk as the science explained, because if that was true, it would be headlining the news every day, on the TV, radio and in the papers. I think many busy or optimistic people make that assumption, because the media avoids the truth as if it’s contagious. In the UK the press strategy used to be to promote climate denial; now it’s to tick a few of the right boxes on plastics and recycling and advocate veggies and electric cars, as if it’s the role of the public to address climate change because the government is already doing all it can. The five billionaires controlling our media are criminally culpable, misleading the people their papers exist to inform, but as Jonathan Fuller has illustrated again and again over the last few years, there’s more than enough evidence to convict the BBC of the same charge.

We have seen recently the way this misinformation allows the media to make villains of the truth tellers and exonerate the dangerous. So in September, when I was one of those who blockaded Newsprinters in Broxbourne (while other rebels did the same in Liverpool and Glasgow) with a message on a lorry calling on these papers to TELL THE TRUTH, we were condemned for attacking the freedom of the press – when the press in the UK languishes in 40th position on a chart assessing such freedom and is dominated by a mogul who regularly dines with the Prime Minister. A point was made. No harm was done unless you count trivial sums lost by the billionaires and some disgruntled readers having to source their lies online. Yet Keir Starmer and the estimable David Attenborough joined with the establishment at large in condemning us roundly, rather than considering that the target might be valid, or owning the dire consequences of the misinformation peddled in the papers we prevented from reaching shelves. Like all those arrested so far with Extinction Rebellion, we face trial for trying to illuminate a truth shrouded in darkness by government and media alike.

The same knee-jerk hysteria kicked in a few weeks ago, after a small number of rebels went quietly and respectfully to Attenborough’s house, with the gift of a plant and a deeply appreciative and non-confrontational letter honouring his work but inviting him to consider that mass civil disobedience might in fact be necessary if we are to effect swift, radical change. With no intention of harassing him or his family, they simply withdrew, leaving the letter and gift behind them. This week we have seen another jaw-dropping example of inversion, following an action at the Cenotaph decried as outrageous, as if it amounted to desecration of Remembrance and thus all Britain holds dear. But what happened? Three rebels, including a nurse and an ex-soldier in uniform, bowed their heads and silently laid a wreath, which read ACT NOW, among the others, and briefly held a banner drawing attention to the fear shared by the Ministry of Defence that climate change, which already kills, will inflame war. No, they didn’t trample on anything, literally or symbolically. There was absolutely zero disrespect. Yet even Julia Bradbury, who spoke at the launch of XR, condemened the statement. Watch the film featuring Donald Bell, the retired soldier, and read his statement, and XR’s, if you’re unsure. I honour those three rebels for their courage, anticipating the media reaction, and for the tone and design of the protest. Extinction Rebellion exists to serve life by sounding the alarm you won’t hear on TV or read in your newspaper. It clearly isn’t possible to make headlines by telling the truth, however boldly, creatively, lovingly or peacefully or with absolute dignity, without those headlines inverting it.

So do I despair? Of course; we all do. But is there hope? Might there be, before climate chaos becomes irreversible? Will Biden be able to change anything? Will the UK feel obliged by COP26 to abandon financial support for fossil fuels, given that they are no longer a viable investment, and act to restore biodiversity (having failed so far to meet 17 of 20 targets)? I don’t know, but I know that life, and truth, and justice and love are worth serving, so until governments, industry and media serve them too, I’ll keep rebelling. What else can we do?