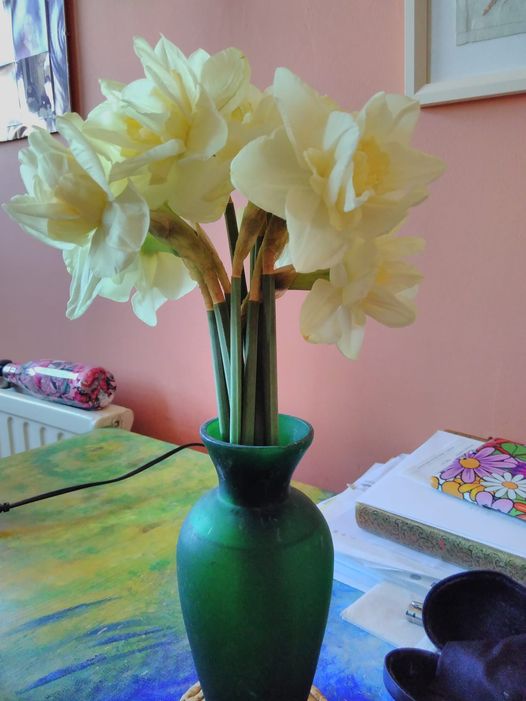 Easter Sunday. It’s a jumble of a celebration, with bunnies and chicks staying out of ovens and off plates just long enough to parade their cuteness – for marketing purposes of which they’re innocent. And there are flowers, all of which I cherish – including the pale daffodils beside me on my kitchen table, which were given to Mum for Easter. She gave me some of hers and I gave some of mine to Leslie’s mum, all of which seems more spiritual than the festival has become. Although to be fair, King of Kings was on TV on Good Friday: a day I could hardly bear as a child who loved Jesus and wept for the beautifully sad hero who mysteriously gave up his life that we might live. That particular part of the story – otherwise a perfect emotional blend of love, treachery, courage and sacrifice, denial, grief and passion – never made much sense to me, but I think I expected to understand when I grew up. For some time, as an evangelical Christian, I accepted everything that troubled because I thought that was what faith required from me.  I still love Jesus, and I’m increasingly drawn to Mary Magdalene and all she can represent. If I watched King of Kings, I’d cry, just as I’ve cried through a few Good Friday services – mourning not only the cruelty and injustice but, since 2003, the loss of my beloved father. I remember such a service (Methodist) when I was so overwhelmingly moved and bereft that it felt as if every tragic aspect of life as a human had been gathered into that powerful story: not just my personal grief but the world’s sorrow and dark destructiveness.

I’m a Quaker now and we don’t do the daily worship through Easter, but that doesn’t mean we, or I, reject the dramatic intensity and importance of the story. I call myself a follower of Jesus, sidestepping the doctrine and the question of literal truth to embrace the light and renewal and hope, the belief – made concrete by my father’s death – that love is stronger than anything, and a deep desire to live my doubting, open faith in action. To do “what love requires.” When completing the Census recently I was unsure how to label myself (no bad thing, in general) because I’m not a Christian in the sense that I couldn’t tick all the boxes, or say the Creed, with conviction. I acknowledge that other faiths speak to other people, and had I been born in a different part of the world I might be a follower of Mohammed, for example. Much Buddhist teaching chimes with me as a vegan climate activist. Yet I have been inspired by Jesus all my life. Some Quakers consider themselves part of the Christian community and others don’t, not least because of the history of militarism in some churches, where army cadets still parade in uniform, but also because Quakers suspect divisive dogma and live with mystery as the rational and emotional essence of religion. Not all Quakers are comfortable with the term God, and when I use it all I mean is love, justice and truth, the numinous, the beauty, the Light. It’s a recognition of soul or spirit underlying the physical and personal, connecting all that lives and illuminating something bigger, better and unfathomable but profoundly moving. At this point in my life, it’s more than enough. It’s really everything. Oh, and going back to the Census, there was also the issue of whether to write Climate Concerned under Other – which I did in the end, because although it’s not a faith but an informed response to scientific consensus and available evidence, there was nowhere else to write an identity that after all defines me and flows in my case directly from my Quaker faith and determination to follow Jesus. That data is going to be as jumbled as Easter and indeed our secular but multi-faith society.

It was simpler when I cried, “He is risen indeed.” Stripped down, it’s an expression of joy and idealism. My dearest, unconventionally Christian friend, Rosie, who is celebrating rising today, in many different ways including home-baked bread, sent me an electric Easter card of sunrise over the sea. Yesterday we met a new baby in the family for the first time. The magnolia and cherry blossom are exquisite in sunshine. We took part in the march against the draconian policing bill, which while we were there was entirely peaceful, with drums, a stirring acapella rendition of Change Gonna Come by Ruth Brown at the feet of Gandhi, and a coming together of movements that felt almost exciting in its positivity. But like the Easter story, it highlighted hatred as well as love – and I don’t mean hostility towards the police, although for a very small minority, that must have been part of the mix and not, in many cases, unfounded by painful and inexcusable experience. The darkness was a cloud of endless injustice. Do we really still have to protest against this stuff? When will we ever learn? How selfish and blind can humans be, and how bigoted? Have we reached a point, in a Climate and Ecological Emergency, when we will finally self-destruct without hope of renewal, without any hope at all? Earlier that day, when we passed a sign in a window that said, LOVE WILL WIN, Leslie pointed out that it looked old, tired and neglected. A reminder that love still hasn’t won. But it’s a choice to keep believing, even if it will never win. And I choose to be a climate and peace activist, even though in my despairing moments I fear that governments won’t act fast enough, or with enough radical commitment, to prevent catastrophe, and that as the end of so-called civilisation draws closer we will respond with more conflict, division and war, rather than concerted unity as one human family. In fact, regardless of which box I tick or which label I wear, and however big a part doubt plays in my faith, it doesn’t feel as if I have any choice at all.