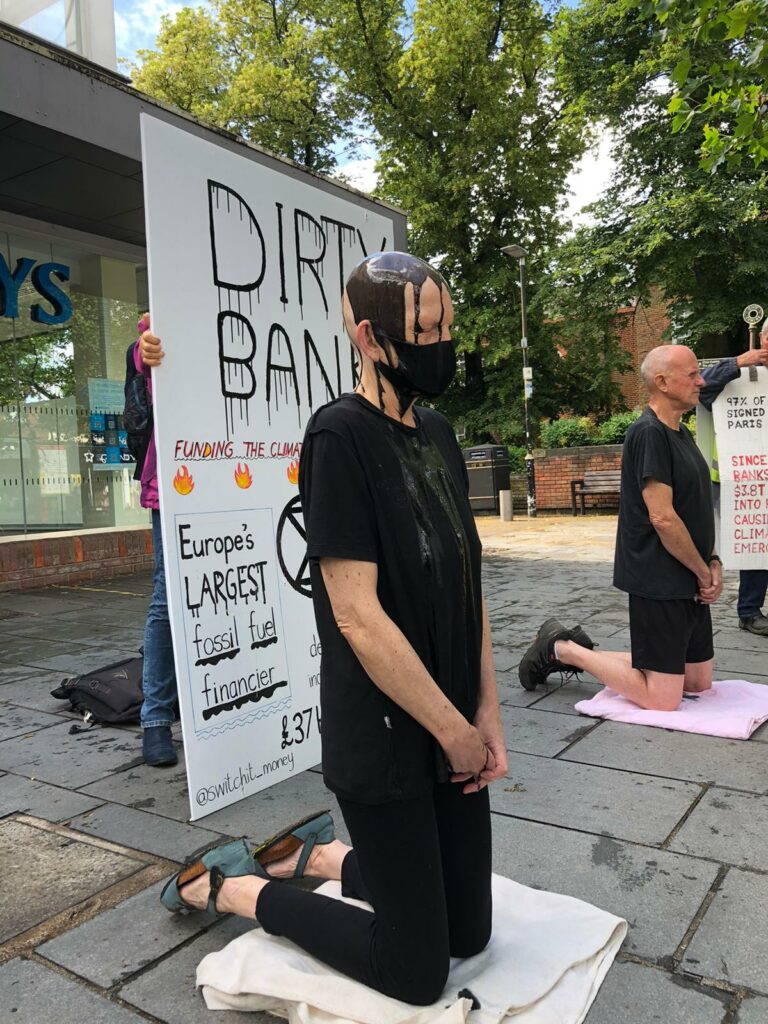 A part to play: street theatre with ‘oil’

When it comes to kneeling in front of Barclays Bank to be anointed with ‘oil’, the role feels right and powerful and meant for me. I joked with someone last time that it may have taken a few decades but I’ve now discovered a benefit of Alopecia Universalis. But that’s not the only reason I am willing to play the apparent ‘victim’ in a simple and very direct piece of street theatre which draws attention to fossil fuel funding by the seventh guiltiest bank in the world. I used the biblical verb because of how spiritual it feels, how profound, emotional and oddly peaceful too.

Kneeling with my eyes closed is not part of my worship as a Quaker. But when I do it on a high street it connects me with the truth on which I wait, the Light in which I wait on it, the love in which both are rooted – which sometimes I call God. Leslie addresses passers-by with the evidence that justifies our action: the climate science and the deeply incriminating numbers that add up to greenwash as well as a crime against humanity. Unable to see those passers-by, whether they stop to watch and listen, or even how close Leslie is to pouring the fake oil over my head, I hear it. It bruises all over again. It hollows out the trivia that fills our heads when we live ‘normally’, and leaves behind only this. The crisis, the urgency, the failure, the relentless Ecocide. The deep, ever-present reality ducked by governments, finance, the media and sometimes the church.

Whether or not I’m a Christian depends on the boxes you’d need me to tick, and I prefer to call myself a follower of Jesus. As the ‘oil’ falls, cool and thick, on my bare head, and slides down my face, soaking my mask and trickling its way from my chin to my neck and chest, I feel a conviction that it’s what he would do. That his spirit, if you like, is with me – not in a supernatural sense except that it’s my soul that knows, inasmuch as a soul ever can and if that core that’s freed, in the moment, of everything else but this, is indeed a soul. If I’d been born to a different faith, I have no doubt the certainty would feel the same.

But the sacrifice isn’t mine. It’s made by those in the Global South, who really pay the price of oil. By those already suffering and dying because of our Western addiction to a fossil fuel lifestyle and the true victims of rich nations’ greed. Like taking the knee, the action is an acknowledgement of something that’s bigger than the individual that absolutely must unite us as humans. And like Covid, the climate crisis is fundamentally and racially unjust, but I’m fundamentally privileged. I’m not even risking arrest, just the usual abuse, and in any case, so far the response of the public has been more positive than otherwise. I suspect that some of the staff at Barclays branches, to whom we deliver a letter before we begin, understand and respect what we are doing. As actions go, it’s soft, but many have commented, online and on site, on the impact of our drama. I wear black, for reasons that are practical but also symbolic, because like all mourners at a funeral I’m overwhelmed by grief, and I’m focused on loss that’s almost too unbearable to frame in words.

Three articles in local papers have followed our two outings so far, but I’m aware that the audience for video footage and photographs consists mainly of Rebels and sympathisers. A photographer from the Telegraph came round the corner from the Magistrates’ Court in St Albans to capture up close what I couldn’t see, so it’s possible that one image might surface someday, but none of us will be checking. We’re not breaking glass like Gail Bradbrook at her local branch, so there will be no trial to thrust Barclays or us and our ages and street names under the national media spotlight. To anyone who doubts the value of what we do, I can only say it feels important, necessary even, and worthwhile. Afterwards, I have no chat in me. Moved and troubled as I am by our play without dialogue, it actually sustains my mental health because instead of living as if everything is fine I’m scrubbing from my soiled clothes and bath the proof that our world is anything but.

Why write like this at all? Yes, to encourage others to do the same outside their nearest Barclays, and to encourage anyone still banking with them to @switch_it. Also to share with non-Rebels the truth that when we engage in such activity we’re not messing about or having a laugh. This is literally deadly serious and even masked, it shows.

If you’d like to read poems, short stories and essays about other ways of Rebelling for Life, and help me donate my author share to Extinction Rebellion’s Legal Fund, take a look here.

PrevPreviousAll I want: a birthday blog
NextCode Red: a storyNext