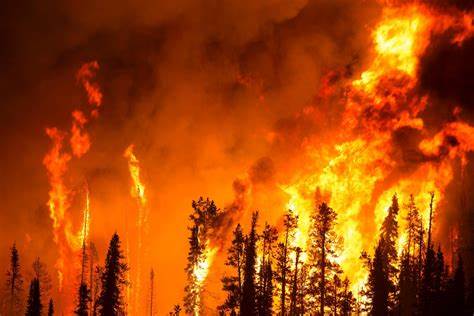 From a car window, a child looked back at towering flames that melted the town they were leaving behind. “If people are heating up the world,” asked the child, “why don’t we all just stop?”

Her father told her again not to touch the metal that soaked up that heat in the queue along the smoky road. He had no heart to answer.

“Oil is money,” he muttered to his wife, knowing the child wouldn’t understand, and thinking of all the petrol that had filled his tank for so many years. His anger and fear made it as hard to breathe as the ash in the air. “The fat cats don’t care.”

The child couldn’t see any cats but she hoped they weren’t too fat to run, far away to where the land and trees were still green. Not red and black. Her mother stared from one side of the road to another, but now everywhere looked the same. Everything she had collected over the years to make life easier would be eaten and spat out by the fire, every precious thing she had dusted and tidied. She could barely remember what they were or why they mattered as long as the people she loved most could live beyond this together. And the neighbours she liked least, as well.

Her child’s question remained in her head. If it didn’t stop now, then when? But who would save the world if the politicians had been to school with the oil men and met them for dinner parties with six courses and expensive wine?

People with buckets threw water at the flames, making them hiss before they raged again. If she had known before the life sparked in her womb, she would have spared the children this. She tried to rub the tears from her eyes because they burned. She was sure her tongue was black and crisp.

“Sit now and pray,” she told her daughter. Ashamed to lie, she could see no choice. “It will be all right.”

“They will stop now,” she said, trying to believe it. “They will pay attention.”

Her husband thumped the steering wheel and shouted, “Come on, go! We’re turning into lobsters here.”

Humans boiled lobsters alive, the girl knew that. But why? It was cruel. If she saw any animals struggling to breathe by the side of the road, she would make her father stop and bundle them onto the back seat. She’d share the water whatever he said. The animals hadn’t heated the Earth and now they were dying.

“It isn’t fair,” she cried, but the fire cracked and crackled so loudly that she thought no one would hear.

Relieved to accelerate briefly, her father breathed out, dried a sweaty hand on clinging trousers and told his wife, “Life isn’t, never has been. So why would death be any different?” For a moment he laid a hand on hers. “No justice in this world,” he called back to the child.

“Love is justice in action,” the girl told him. She’d read it in a book with long words, in the school that was now ablaze. “That’s what they say.”

Her father said nothing. Dreaming was for children but however sharp the sting in his eyes, he’d never been more afraid to close his eyes.

Looking down from his bedroom, the boy clutched a curtain in one hand and pressed the other against the streaming glass. The street was a dirty, rushing river, littered with trees and cars and furniture and bricks, all dragged along and away below his house. It was a different water that wasn’t for swimming, or washing, or sailing, water that would poison anyone who tried to drink it and clog their lungs with mud. It was high and hungry, and no one could stop it.

His grandmother lay still in her bed but above the gushing and thrashing her cry was high as birdsong but heavy, a kind of moan with no words. The last thing she’d said to him was the night before, when the rain grew fast and hardened and the street began to flow. “Never in my whole life,” she’d told him. “Nothing like this.” Her world had been misty for so long that her clarity made him even more afraid.

If he was the mayor he would send in boats, and when the water had gone he would make sure it never broke down any more doors or walls. His teacher said they had to stop burning fossil fuels and his brother at university had been on strikes for climate but the boy hadn’t believed in the fear because his country was rich and safe.

“Grandma,” he said, leaving the window and touching her arm, “Shhh. It’s all right. Don’t cry. I’m here. I’ll take care of you.”

If his father didn’t return he would have to, but how? She couldn’t swim, hadn’t needed to. And when she resisted she was as strong as she was thin, and stubborn.

A great thud thumped the house wall and something shattered but was it wood or glass? Hurrying back to the window he opened it on a foreign smell, like the butcher’s shop the day the old meat was taken away, and the mould on his father’s Stilton and an acrid rust. He closed the window.

It was a long way to jump but if it was a river running gentle he could do it. Only this water was wilder than rapids, and it battered. If it could tug a bus shelter from the swallowed ground, how could a young boy fight it? Now he knew what adults meant when they said weather was extreme.

He looked at his phone but the screen was empty. No light. Again he called his father but it only rang. Perhaps he had drowned. Or perhaps he was watching from dry land, helpless too.

The boy could only wait.

“You know the police raided the Art Factory,” the girls’ father reminded them as they littered the kitchen with corrugated card that shaved soft grey. “We’ll know who they’re after if they break down our door.”

He asked them about the messaging, as if he didn’t know. The template spelt CODE RED but the papers had relegated the story to make way for Formula One, Love Island, Prince Andrew, migrants and a Russian spy. And the cost of going green, which bothered some of his colleagues.

“Are you sure there’s any point?” he asked.

His daughters both looked up at him, same expression. Incomprehension, probably. They thought he’d failed them, like all the other white men in charge, and he supposed they were right but it was hard for a father to pick up his children from a police cell, and what for?

“With heatwaves, fires and floods around the world?”

“If not now, exactly when?”

“I only meant that numbers could be down again, you know, with Covid,” he explained. “I’m not sure what another Rebellion’s going to achieve.”

“Have you got an alternative plan, a better one?”

Ah. He was wondering how to answer that when he was told, “I suppose you want us to swallow the greenwash and trust our honourable leaders.”

The two of them spoke almost in unison. Then they exchanged smiles that were so sad he’d rather they scowled, shouted, broke something. He looked for the letters for LOVE among the ragged waste, and offered to change the blades on his Stanley knife because the cutting was clearly tough.

“We can do that ourselves.”

Of course they could. He mustn’t patronise. “You know I support you…” he began.

“But you’re not convinced by civil disobedience theory.”

As if on cue came the punchline.“Even though you haven’t personally given it a try.”

That was a fair point, apart from the risk to his job and the income that paid for their train fares to London.

“I’ll leave you to it,” he told them. He supposed he could at least make them some tea. Show them he was proud of their spirit.

After he’d gone, the sisters didn’t speak for a while.

One dusted debris from her jeans and shook her head. “You know that Manics song about stealing the song from my heart?”