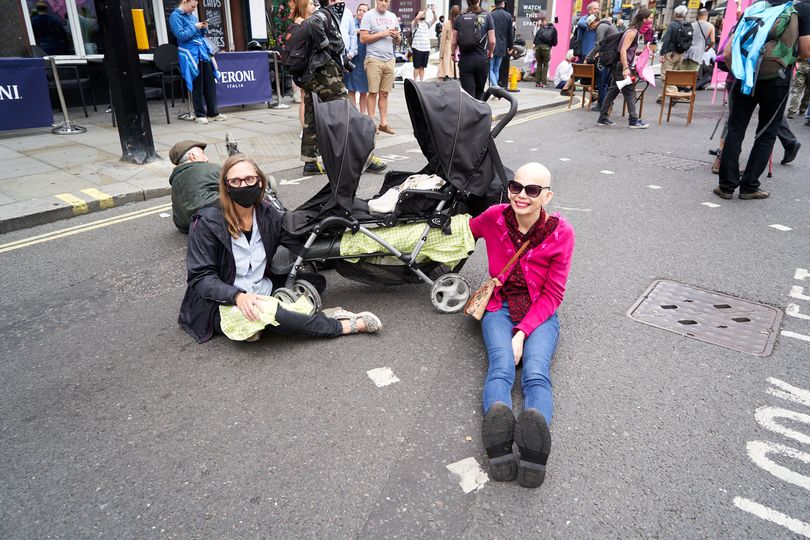 The Impossible Rebellion lasted two weeks, and I was there in London for twelve of those days – on the streets, holding a banner, singing, dancing, listening, waiting, crying, locked on, glued on, under arrest and briefly in hospital. At different times I felt inspired and exhilarated, moved, shy, loved and determined, invisible, despairing, cold, uncomfortable and ill. The part I ducked was the one-to-one outreach that meant talking to passers-by, whether that meant the drivers slowed alongside our march or shoppers wondering why a pink table was surrounded by hundreds of police in Oxford Circus. I’m much more scared of that than being locked on in a road or alone in a police cell overnight, which is pitiful at 65, especially as I can talk on a mike and enjoy interviews on livestreams. It’s the risk of conflict, I suppose, but Leslie, who is brilliant at engaging the public and indefatigable in spite of pain, experienced very little of that this time round. He found only two vehemently opposed – “I fucking hate you lot” – and a surprising number of people who were unaware that there’s a climate or ecological emergency. Many more were not just curious but genuinely keen to understand what was going on and why, and a big overall majority were on side, taking flyers, applying XR stickers and thanking us. Even among those delayed a little at the wheel we encountered a great deal more support than we expected. In Extinction Rebellion we’ve been ringing the alarm for two years, and although some still haven’t heard or paid attention, most UK citizens now recognise the problem humanity faces AND can see that the government is not doing nearly enough to address it – in other words to protect life on earth.

This Rebellion featured some familiar elements in the samba bands, spectacle and creativity, and direct action leading to arrests (more than 500, I believe).  But this time it was different too, in various ways. Instead of attempting to hold a few chosen sites for as long as possible, we were fluid and flexible, moving around the City of London and taking spaces for no longer than a day or so, in order to regroup elsewhere. We told the police very little given their increasingly heavy approach, and were able to drop pink tables in several locations using tight planning and decoys. Having connected with BLM and other groups, we were more diverse, the beginning of a movement of movements. And we had a simple, utterly achievable demand for the city that finances climate destruction: that these institutions “stop the harm” now, and more specifically commit to no new fossil fuel projects. So we spent some time outside the Bank of England, issuing an invitation to Andrew Bailey to come and talk with us. We failed to glue on at Black Rock but we visited Lloyd’s of London and doused Standard Chartered and co with red chalk paint to symbolise blood money. Two friends were among those who removed their clothes behind a banner outside Barclay’s. A little glass was carefully broken but no litter was left (unless you count the tables, chairs and lock-ons the police confiscated) and the daubing did no lasting damage. Plenty of Rebels broke bail conditions, mostly openly and without consequences. Some actions were pulled off with precision and daring, especially early on. The police presence was often hugely excessive and there were some examples of brutality too, but plenty of officers showed consideration, respect and patience. Even under great pressure – on one occasion under batons and on another forcibly pulled apart when superglued – we Rebels remained strictly nonviolent. The spirit was more or less buoyant and meditative but never less than lovingly warm, as this film captures so beautifully. Numbers were sometimes up to 10,000 or so and included many first timers, while rumour has it that thousands signed up to the XR website during the fortnight, with donations rocketing too. So those who stayed away because they thought Rebellions weren’t working missed something energising – if exhausting – and demonstrably effective, up to a point…

That point of course is radical change now, which is arguably too late. Andrew Bailey didn’t come out to talk. The government is still considering the Cambo oil field, massive roadbuilding, the Cumbrian coal mine… The Church of England has not yet, since I was part of a Christian Climate Action protest occupying St Paul’s Cathedral, announced that it will meet our very reasonable demand of divesting fully by the end of 2021 – although we do currently have a meeting on offer with the Bishop of London, and many Christians are contacting their own diocese, and/or considering similar action. Time continues to run out. The fear and grief, desperate anger and sense of hopelessness was to a degree kept at a distance with drums, smiles, spirituality and the conviction of love shared, but that distance may shrink fast in the return to ‘normal’ life, and the songs in my head may begin to sound terribly sad. So what’s next, as COP 26 approaches? We have to maintain the momentum and keep applying pressure. Show the City of London, media and government that we’re restored and growing, we’ll always be on their doorsteps, in numbers modest or substantial; that public opinion aligning with us will one way or another force change. That whatever happens we will never, ever give up.

Personally, emotionally, I found joy and peace in the Impossible Rebellion. I love my XR and CCA friends, even if I don’t know them very well, because we are family. Sometimes I revert to teenage silence in a People’s Assembly group or within a crowd but that’s part of who I am. Most of all, I really can’t cope with not doing the most I possibly can to protect my grandchildren and everyone else’s too. I’d intended more arrests in an attempt to throw everything at this Rebellion while I still can, but getting ill through dehydration meant that my 23 hour lock-on led me into an ambulance, and that’s not an experience I want to repeat. I was too tired to stay to speak at the Closing Ceremony but nothing has to be over. Even though we have lost our accommodation in Glasgow so I’ll be marking COP in London and locally, there’s more to do, both in November and in the next couple of months. And nothing matters more. How could it?

I’d like to finish with a gentle song that fills my head, a tune the words of which I’m trying unsuccessfully to learn. It’s beautiful.