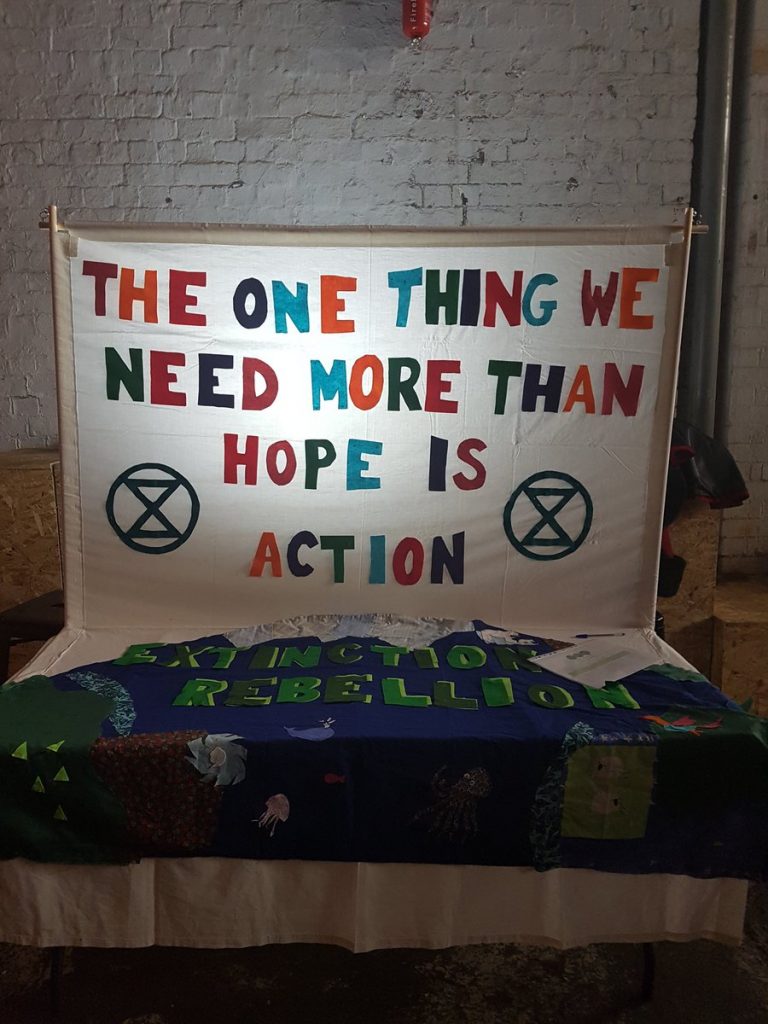 There were four of us at the table, all of us heartbroken but committed, and none of us sure what to do – not just about a trial we were facing next week (which has since been adjourned) but as climate activists running out of time. I like to believe everything we do, peacefully and with love, makes a difference. The Overton Window keeps shifting as a result of protest, and people are waking up to a truth that for decades had been a secret. But nothing has actually worked. Emissions continue to rise as records keep breaking. In spite of unlivable temperatures, ice and permafrost melting faster than predicted, drought and flood and fire, governments continue to resist change and press ahead with new coal, gas and oil. As a Quaker I didn’t want to wear a mask giving a bank CEO devil horns but I’m not sure what could be more evil than the richest and most powerful conspiring to destroy life on earth for short-term gain. Morality and love compel me to protect that life and that planet. But how? What’s next?

When I ask an XR hero I hold in awe, her answer is mobilization and training for the next Rebellion in September. Now that the media ignores crowds on the streets, we have to build bigger crowds – too persistent to frighten off with authoritarian policing and sentencing, and too huge to overlook or to accommodate in police custody suites. We’re back to Erica Chenoweth’s 3.5%, even if it means door-knocking – and real heroes will do that. (I’d rather lock on to something overnight). But even September is four months away and the science tells us we only have a couple of years to change direction. 2 million people, including me, couldn’t stop Blair’s war on Iraq, and my mother says it’s a pity there are so many protests. Now that the novelty and impact of floppy Rebels being carried to police vans has worn off, some of those who occupied those London sites three years ago have lost faith, while others are deterred by the risk of 51 weeks in prison just for being there. Waterloo Bridge April 2019 was one of the most beautiful experiences of my life, but it’s hard to imagine replicating it, however differently, with a hundred times as many nonviolent earth protectors. Then, climate change wasn’t even included on YouGov’s list of issues that might concern us. Now there’s less denial but a flood of greenwash and promises – not least from a UK government claiming to lead the world. And anyone watching BBC News or reading the Telegraph might reasonably assume the problem must either be exaggerated or under control. For some activists, including some of us who despaired over soup on Thursday, the only practical option is more disruptive action taken by smaller numbers.

One of these friends is living, undimmed, in the shadow of 17 court cases from action with Just Stop Oil and Insulate Britain. But the media is more interested in conflict with the public and in serving up real-life interviews in the style of Don’t Look Up than in the science that drives people to risk prison. So the prison sentences aren’t cutting through, with a few incarcerated here, a few more there, and the majority of the population unaware of their sacrifice. So how many activists need to be locked up in order to make headlines and generate debate in the way that early XR arrests were able to do? And while on a theoretical, rational level it’s true that nothing else matters, how many humans are ready, emotionally, to undermine or surrender those relationships at the heart of our humanity – as well as careers, savings and homes – in the way that Roger Hallam calls on us to do?  Patel’s new laws make people like me choose between actions to protect my grandchildren’s future and seeing those grandchildren now. To give up love for love.

It’s fair to say that we don’t have a great deal of hope between the four of us, but that’s irrelevant in the sense that we know we have to keep trying anyway. Another friend is a feminist who believes in the power of motherhood. My own mum is a Pacifist who nonetheless used to tell us as children that if we were in danger she’d fight like a tiger to save us. I don’t doubt the courageous love of mothers. Maybe bystanders unmoved by students or pensioners in civil disobedience would respond to women in headline-grabbing action? But how many would it take and would they have to risk prison? And isn’t it fairer for the young and the retired to take the strain? The most ingeniously practical of the four of us no longer believes in street theatre, engaging the public, or any kind of action that isn’t seriously disruptive of a corrupt and destructive system. But one thing we all agree on is the misery and guilt of not taking action at all, and for me, fake oil over the head or a banner on a bank roof have a part to play – in sustaining those taking part and firming bonds between us as well as challenging the audience and making local news. I suppose the most rewarding actions are those with an achievable outcome, like the Christian Climate Action campaign to persuade the church to divest from fossil fuels, but nothing happens quickly. It felt great when XR shut down Lloyds of London for a day, and exhilaratingly important when we prevented some toxic, truth-averse newspapers reaching the shelves back in 2020, but there’s usually a comedown that accompanies recognition, once the adrenaline subsides and a night in a cell leaves me exhausted, that it wasn’t enough. Nothing’s really changed, and everything needs to change fast. So I do understand why some people simply live simply, grow veg or plant trees, and find peace on retreats, in meditation, yoga or worship, or build resilience in a small community for when the climate crisis comes home. But it’s a global crisis and I can’t abandon those at risk and suffering now.

When asked what to do, another XR hero would answer differently again, because he says climate change is the symptom rather than the problem. And the problem is inequality. I can’t disagree. So his call is to dismantle the causes, owning white privilege and focusing on solidarity with and reparation for those least responsible for emissions, like the people of Africa who between them create less than 4% of greenhouse gases that are killing us. XR has always talked about climate justice but he believes in more fundamental societal and global change than stopping oil, and morally it’s impossible to disagree. But what does that mean I should do, now, before it’s too late?

I honestly don’t know. The four of us Rebel friends – different temperamentally and in life experience – have no one answer to unite a movement. And we can’t, for life’s sake, be divided. Debate may be healthy, but it can also stultify and frustrate, and a piece like this achieves nothing – a feeling well known to activists spending hours in Zoom meetings. I’m heartened by the clarity of @ClimateHuman, NASA’s Peter Kalmus, who tweets daily encouraging readers to resist, in the certainty that only such resistance can effect change now. But exactly how we resist remains a daunting question. Within the big and terrifying picture we have different personal certainties, and for me they include an uncompromising view not all Rebels share, that meat is quite literally murder – not always easy to reconcile with a determination not to judge. LOVE has been fundamental to XR from the beginning, and has to shine through everything we do as a movement of movements. Like the science, that’s my truth, and equally uncontrovertible. The four of us who ate that soup together love each other in that way that Rebels do, with a short-cut but deep connection that doesn’t depend on the usual slow-build intimacy. Maybe, just maybe, love of life on Earth will be enough for each one of us, keeping us whole and strong and united. Maybe any and every heartfelt, peaceful action counts, is necessary. Maybe together we’ll find our own ways of serving the overwhelming truth it’s easier to shelve than read. There may be little hope but there’s no alternative.